North by North West: What went wrong in Warrington?

Four years ago, Simon Stevens said his approach to how services were organised was not “one-size-fits-all”, it was rather “horses for courses”. NxNW looks at how one of these models fared.

Back in 2014, Warrington appeared to be a frontrunner of primary care transformation.

All the practices in the borough joined a new GP federation, Warrington Health Plus, which set out with the noble ambition to “save primary care”.

A gifted set of managers were recruited to lead the new entity, and with help from the CCG, around £5m of national funding was secured to develop multi-disciplinary teams around the traditional GP services (under the “primary care home” model).

But within a year, several GPs began asking questions about the money.

They were essentially concerned that too much was being spent on management and external consultants, as opposed to services on the ground, and found it difficult to get information out of WHP, despite the fact they were all equal shareholders.

Schisms started to emerge within the GP body, and relations deteriorated when formal concerns were raised with WHP and the CCG.

HSJ understands a review was carried out by Mersey Internal Audit Agency, commissioned by the CCG and NHS England, but never published.

Meanwhile, relationships had also become strained between WHP and the CCG.

Although Dr Andrew Davies, the CCG’s chair, was a director of WHP in its first six months of operation, he had stepped down from the company when he became the CCG’s chief clinical officer.

When the national funding ran out, WHP had been expecting to win new contracts from the CCG, but it ran into financial difficulties when these failed to materialise.

WHP’s chief executive Alison Holbourne left for the Care Quality Commission in August 2016, and its activities have significantly scaled back since then (including ceasing to hold the NHS England contracts for three GP practices).

Around two-thirds of the GPs attempted to close the company down, but narrowly failed to meet the required threshold in a formal vote. Instead, the practices simply gave up their nominal shareholdings instead.

The GPs that quit the company had by that point become a cohesive group, and subsequently established a breakaway federation, Warrington Primary Care Collaborative Limited.

It was against this backdrop that serious tensions began to emerge within the CCG, whose chair Dan Bunstone (as a salaried GP) and chief clinical officer Mr Davies (as a director) had both previously been associated with WHP.

Dr Michihiro Tomonaga, a GP lead on the CCG’s governing body, was a director of the new breakaway federation. The CCG said this amounted to a “conflict of interest” and enacted a dismissal process. He has challenged this and complained.

The dismissal caused uproar among the other breakaway GPs, who had their own concerns about potential conflicts of interest relating to WHP, and were making allegations of “disappointing behaviours” from the CCG’s leaders.

As reported last week, the 16 breakaway practices (out of 26 in the borough) took the nuclear option of sending a formal ‘no confidence’ letter to the CCG’s leaders, copied to NHS England.

Then this week Dr Bunstone resigned as chair, but said this was nothing to do with the GPs’ letter.

He has been chief medical officer with the online GP service Push Doctor since May this year (another bone of contention with the breakaway doctors), and said the company’s new arrangement to work with NHS patients had created a potential conflict of interest.

Just to add to the plot, there were some technical issues with the CCG’s declarations of interest webpage last week, which apparently meant Dr Bunstone’s Push Doctor position was not listed.

If there is still evidence needed of the damaging impact of the Lansley reforms, the fallouts and recriminations in Warrington provide further evidence.

GPs’ involvement in commissioning has made for highly complex and opaque governance structures, and their dual commissioner-provider role means claims about conflicts of interest are constantly lurking around the corner. Just imagine the management capacity, headspace, and stress that these issues will have absorbed and created in Warrington alone.

NHS commissioning is clearly in transition, as regions continue to scale up and contemplate accountable care models. But the sooner the future of CCGs is sorted out, the better.

The last edition of NxNW looked at emergency bed day statistics in Greater Manchester. But for those of you reading it within the email newsletter (as opposed to the website link), I realised you won’t have seen the graph.

So here it is: 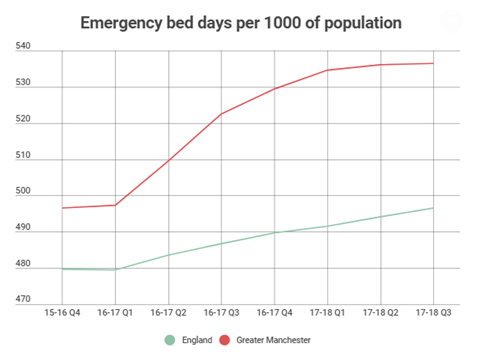