For a critical period leading up to the peak of the coronavirus pandemic, the number of patients discharged from hospitals to care homes was higher than in the previous year.

The government and NHS have been heavily scrutinised for failing to protect care home residents from covid-19, with some pointing to a systematic effort to discharge large numbers of hospital patients earlier than normal, many of whom could have been carrying the virus, in order to create space in hospitals.

Ministers and NHS England have challenged this narrative by pointing to data showing discharges to care homes dropped significantly between January and the end of March 2020. Prime minister Boris Johnson said last week: “The number of discharges from NHS into care homes went down by 40 per cent from January to March. It’s just not true there was some concerted effort to move people out of the NHS into care homes.”

While this is supported by the new information published this week by NHS England, the full data also shows there was an increase in discharges to care homes in the first half of March, when compared to the same period in March 2019.

NHS England said there was a large reduction in lower acuity hospital activity over this period — with fewer younger patients in hospital - meaning a larger share of more elderly patients were being admitted from, and discharged to, care homes.

Sally Warren, director of policy at The King’s Fund, said: “Detailed analysis of the new data shows that for a critical period in the run up to the peak of covid-19 infections, hospital discharge to care homes was higher than the previous year.

“As the pandemic took hold, hospital clinicians were faced with tough decisions about discharge. Vulnerable patients were in danger of contracting the virus if they remained in hospitals that were treating covid-19 patients, and rapid covid-19 testing was not available to help clinicians assess the risks to care homes.” 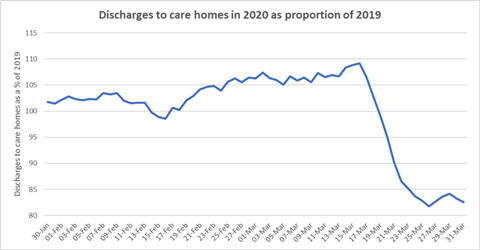 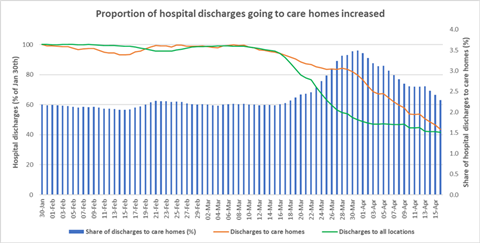 The requirement for trusts to test all patients being discharged to a care home was only introduced on 15 April. Testing capacity was known to be very constrained from March to mid-April.

One CCG leader, who asked not to be named, told HSJ: “The focus was just to get people out. Single discharge teams did this rather than the many fingers in the pie that previously just added delays into the process.

“Relative discharges to care homes compared to total discharges have increased, probably as a result of stopping NHS continuing healthcare funding assessments and [reduced] disputes between councils and CCGs over who will pay.” On 17 March, NHS England said it would cover the cost of all care home placements.

Professor Martin Green, chief executive of Care England, said: “The data early shows that this is a much more complex issue than has been outlined by the NHS. There are certainly some clear indicators that there were significant numbers of people discharged into care homes.”

David Oliver, former president of British Geriatrics Society and ex-national clinical director for older people, said: “As a clinician working in acute care with older people I find it improbable and surprising that there was a major reduction in transfers to care homes during this period. However, I think [discharges to care homes] happened for understandable reasons and in a very different context at the time compared to what we know now.

“I think we in acute care did not fully appreciate the constraints for care home in their ability to shield residents, their access to PPE and testing at the time we were making decisions to transfer. We should have listened and involved them more.”