1
Theresa May: Conservatives are the 'party of the NHS'
Policy and regulation

The Conservatives are now the “party of the NHS” because Labour have “abandoned the centre ground” of British politics, Theresa May has said.

The prime minister thanked doctors and nurses working in the health service and praised health secretary Jeremy Hunt as “one of the most passionate advocates” for patients and NHS staff “that I have ever known”. 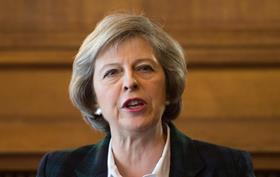 Theresa May singled out Jeremy Hunt for praise in her speech

Speaking at her first Conservative Party conference since becoming prime minister in July, Ms May said the NHS was “one of the finest health care systems anywhere in the world, and a vital national institution”.

“We all have a story about the nurse who cared for a loved one, or a surgeon who saved the life of a friend,” she said.

“So let us take this opportunity to say to those doctors and nurses – thank you.”

Ms May said the NHS and its status as a free at the point of use system commanded “complete cross-party support”. However, she criticised the Labour Party, which she claimed used the NHS to try to divide the country.

She said: “The NHS should unite us. But year after year, election after election, Labour try to use it to divide us.

“Every election, they say we want to privatise the NHS – and every time we have protected it.”

Ms May said Labour had expanded the use of the private sector in the NHS faster than the Conservatives, and claimed the only party to have cut NHS spending was Labour in Wales.

She criticised Labour for an “absurd belief that they have a monopoly on compassion” and a “sanctimonious pretence of moral superiority”, and said it had “given up the right to call themselves the party of the NHS”.

“They gave up that right when they adopted the politics of division. When their extreme ideological fixations led them to simply stop listening to the country. When they abandoned the centre ground,” she said.

She said the Conservatives should “take this opportunity” to show it was “the party of the NHS”.

The prime minister singled our Mr Hunt for praise, calling him “one of the most passionate advocates for patients and for the doctors, nurses and others who work in our health service that I have ever known”.

Referring to the Five Year Forward View, she said the Conservatives had given the NHS the “money it asked for to meet its five year plan”.

She claimed that by increasing spending by £10bn between 2014 and 2020 the NHS would receive “more than its leaders asked for”.