Five years on from the National Stroke Strategy, London has turned around its performance. Alec Fraser, Sue Fenwick Elliot and David Cohen explain how the changes were made.

The national stroke strategy, published in 2007, advocated more specialised acute and hyper-acute care for stroke patients. In the same year, NHS London published A Framework for Action which included a commitment to deliver these changes for Londoners.

Five years on and much has been achieved. While London’s collective figures in the Royal College of Physicians national sentinel audit of stroke services in England were often below the national average, the opposite is now the case. Seventy-five per cent of London stroke patients were directly admitted to a stroke unit while the national figure was 39 per cent.

Seventy-five per cent of London hyper-acute stroke units achieved all seven standards for quality acute stroke care; the national figure was 7 per cent (based on 2010 Sentinel Audit figures).

Equally impressive are the increased thrombolysis rates. In early 2009, 3.5 per cent of London stroke patients received thrombolysis; by the end of 2010 that figure had risen to 12 per cent.

London now has eight hyper-acute stroke units treating all stroke patients in the first 72 hours after a stroke, complemented by 21 stroke units to which patients are admitted following the completion of the hyper-acute element of their care and before supported discharge to community care services. hyper-acute and regular stroke unit care offers specialised medical, nursing care including an expanded therapies team.

This step-change in service delivery has required leadership and coordination from the London stroke and cardiac networks and central NHS London teams such as the Pan-London Stroke Clinical Advisory Group.

In this article we focus on transformational change at the hospital unit level. We interviewed clinical and managerial staff involved in the redesign of local stroke services at Northwick Park Hospital in north London as part of a wider research project focused on the implementation of evidence-based stroke care.

Northwick Park Hospital is part of North West London Hospitals Trust and serves a population of more than 500,000. As part of a regional reconfiguration, the hospital’s stroke unit has been upgraded to a 50-bed combined hyper-acute and regular stroke unit over the past two years and now features a radically expanded multidisciplinary team.

A key characteristic which distinguishes Northwick Park Hospital from other London centres which won bids for hyper-acute stroke unit status is that it was not a neuro-specialist centre and therefore had more ground to make up in terms of medical and radiological resources.

Key to implementation is high-quality, credible clinical leadership harnessed with sustained management support throughout the organisation – from board level to stroke unit level. At Northwick Park, the clinical goals of the medical, nursing and therapies teams aligned successfully with the strategic goals of the senior management team.

Delivering clinical excellence along the London model lines means significant changes for other departments in the hospital and how they organise themselves, their staffing and workloads. Most obvious here are accident and emergency and radiology: to meet the strict targets on 24/7 thrombolysis delivery laid out in the London plan meant significant upheaval in traditional working patterns. This could be achieved only by credible clinical advocacy backed up by firm senior management support and commitment to deliver the changes demanded by the new targets and goals. 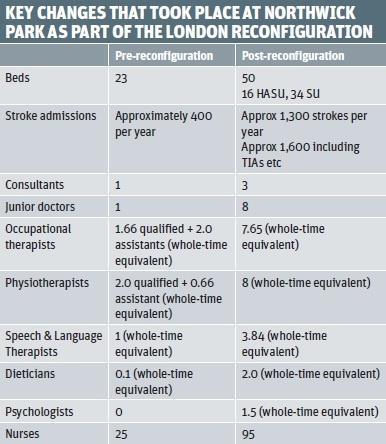 Although it is change at the hospital unit level that counts for patients, these improvements do not take place in a vacuum. Indeed, the strategic leadership and support gained from NHS London and the stroke and cardiac networks was seen as vitally important in the successful implementation of evidence-based change across London’s reconfigured stroke units.

Good engagement and collaboration from clinical leaders with the local and pan-London network groups, including the London Ambulance Service, and involvement in the construction and dissemination of guidelines and measurement instruments led to a form of integrated strategic leadership which stretched down to the stroke unit level.

The commissioners and network groups involved in validation of quality markers were seen as a positive, collaborative force, driving up standards, with aligned goals to those delivering care rather than as a penalising, external inspectorate.

Linked to this is the increased funding for stroke care, which the 31 London PCTs pledged as part of the process of improving stroke care standards. This boost was essential to the transformation of care.

For example, before 2011, and the opening of the hyper-acute stroke unit, there was only one full-time stroke consultant at the hospital – thus 24/7 thrombolysis was never a realistic proposition. However, with three full-time consultants working within a rota of four other consultants including one from the local stroke unit, it is now a reality. Likewise, nursing and therapies staffing ratios have been boosted to a point where specialist nursing care and therapies targets such as the 45 minutes per discipline, per day for each stroke patient are now achievable, and have become the norm, rather than a mere aspiration. The increased funding was also important to incentivise senior management to support the leaders of the stroke service to challenge the organisational issues hindering implementation.

Data transparency and an increased role for audit forms an important part of the London model regime. The hospital is audited on a wide selection of clinical and organisational criteria and regular network site visits back-up real-time electronic data returns. Performance is linked to tariff payments, so audit is no longer of secondary importance, or an aspirational extra, but central to the successful functioning of the unit.

Significantly however, data is used by staff on the ward in order to measure team performance and form a basis for regular feedback across the multidisciplinary team. For example, monthly meetings are held in which all thrombolysis cases are discussed – with the aim of learning about what has gone well, or less well, and how this might inform and improve future practice.

An important factor in the successful implementation of evidence-based stroke care has been the emphasis put on staff taking ownership of how to translate the goals of various policies into practice. For example, the physiotherapists are encouraged to perform their own team goal-setting and to devise their strategies for meeting targets such as the 72-hour assessment. The speech and language therapy staff are involved in adapting guidelines to their own specific practice, and there are numerous examples of local projects aimed at improving nursing practice at the delivery level. More ambitiously, the senior nursing management has designed and commissioned an education programme to train nurses in key competencies at a local university.

A commitment to multidisciplinary team working and collective learning underpins these uni-professional initiatives.

The final factor which has been key in service improvement and increasing evidence-based care relates to the excitement, or “buzz”, that the process itself has generated. For many long term staff, these changes are revolutionary and liberating.

The stroke service leadership has used this momentum to push improvements as far as they can.

Many of the staff interviewed commented on the satisfaction they have at seeing patients recover rapidly and more completely than ever before thanks to innovations such as thrombolysis. This goodwill and pride in delivering the best for patients has been harnessed to push for increasing excellence.

The impressive changes delivered across London and demonstrated at Northwick Park highlight the importance of collaborative clinical and strategic leadership between healthcare professionals and managers. Stringent, evidence-based policies and guidelines devised consensually by a wide range of stakeholders at SHA, PCT, network and hospital unit level are closely monitored and performance is incentivised by linked tariff payments in the reconfigured London model.

In any healthcare system, the balance between the centre and the point of delivery is a delicate one. However, it is the commitment and leadership of staff and the quality of their interactions at the centre and the bedside which is proving so successful in London’s reconfigured stroke services.