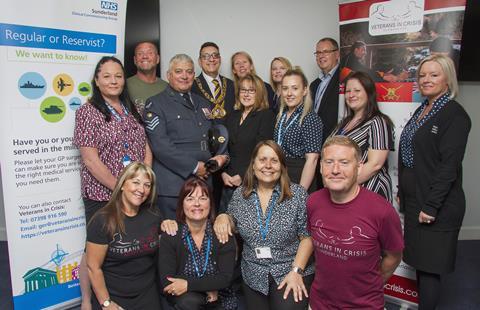 A project which provides same-day support for armed forces veterans in Sunderland has improved services for individuals as well as reducing pressure on general practice.

Sunderland Clinical Commissioning Group has taken a partnership approach to identifying and providing tailored services for veterans on its patch, ensuring that meeting their needs is high on the local agenda.

Steps have included appointing armed forces champions in each of the area’s 40 GP practices, investing in a Veterans in Crisis project that provides speedy one-to-one support, and encouraging veterans to get involved and support each other. Positive results include reduction in drug and alcohol abuse among veterans seen by the service, reduced clinician consulting times because so much support is provided by veterans, and plans for a dedicated veterans’ support facility.

Now, having won the Military and Civilian Health Partnership category in the HSJ awards, the team hopes that other areas of the country will take up and build on its approach.

According to Gloria Middleton, armed forces lead for Sunderland CCG, it was clear some time ago that there was a need for action to improve services and outcomes for veterans – but that there was nothing terribly effective happening. The moment when the former PCT was developing into a CCG brought an opportunity for change.

“It goes back to about 2012, when I felt that everything for veterans was done top-down, and nothing was done bottom up,” she says. “It’s really general practice that gets to see the veterans before anyone else gets to see them, so, when we were setting up the CCG, I went to the chair and said we really had to do something about this. We’ve got veterans out there, we don’t know how many we’ve got, are they getting a good service? That’s how it all started.”

Since then, tremendous progress has been made. One early step was asking GP practices to record numbers of veterans on their lists, and identifying services available. Within a relatively short time, every practice had its own veterans’ champion, information was made available on services that practices could signpost patients to, and there was increased awareness among practice staff of the needs of those who had served in the armed forces, whether regular or reserved.

For Ms Middleton, however, there was something that wasn’t quite complete. “It’s really hard to work with veterans unless you’re a veteran yourself,” she explains. “You’ve got to think the way the veterans think and talk the way that veterans talk.”

In November 2017, after hearing a veteran give an inspiring talk, the CCG began to work with Veterans in Crisis – something that Ms Middleton calls “the missing piece of the jigsaw”.

“We wouldn’t be anywhere near where we are now without them, because what we needed was for the veterans to work with us, which is exactly what they’ve done,” she says.

Veterans Crisis Sunderland is raising money to fund a support centre, called the ERV, which is the name given to the emergency rendezvous that troops designate as a “safe space” in case anything goes wrong. This houses a number of services, including a drop-in centre for veterans, a therapy centre, and even emergency accommodation. “It helps them with so much, so they’re not going to the GP practices as much,” says Ms Middleton. “It means they can go in there and get immediate support.”

She wants to spread the word about the benefits of the approach. “We entered the HSJ awards because I thought that as partners coming together, we had something so unique here in Sunderland, with the policies in place at each individual practice, and the armed forces champions, I just thought I would love to see that rolled out nationally. I know the RCGP has got the veteran-friendly practices, but I truly believe we go that one step beyond.”

She was delighted but astounded to win the award. “I never for a minute thought we would – I had read about the other entrants, and was so sure we weren’t going to win that I’d taken off my heels and put on flat shoes. I was ecstatic for everyone involved – for veterans in Sunderland, for Veterans in Crisis, and the GP armed forces champions and all our partners. The award was for everybody. I felt very humbled, but very proud of what we’d achieved.”