1
From 'I'm only a porter' to 'I'm a porter': Supporting non-clinical staff to recognise their value 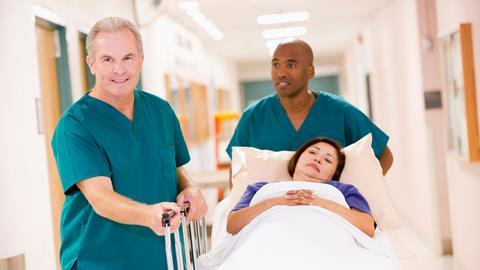 A training programme helps support staff recognise their potential in improving the quality, safety and overall care experience for patients. By Claire Read

Asked to name a staff group which has contact with patients on a daily basis, most of us will immediately think of doctors, or nurses, or perhaps allied health professionals. But the reality is that the NHS employs half a million support staff who, while not clinically qualified, are in regular contact with patients – and whose actions can help improve experience, increase safety, and so bolster outcomes.

As last year’s report from the HSJ Inquiry on Maximising the Contribution of NHS Non-Clinical Staff made clear, the challenge is how to recognise and encourage such contributions. For one provider of support staff, the answer has been to introduce a new training programme which stresses the value support staff add, and empowers them to become a central part of the care team.

The programme was first introduced at Wishaw Hospital in Scotland, where 400 staff have now completed it. According to participants and managers alike, it has made a real differences. And they contend it is an approach which could valuably be adopted more widely across the NHS, leading to better patient care and improved outcomes.

Graham Carnegy isn’t a clinician, but he spends each and every day of his working life with patients. He sees them at times of high anxiety, before a scan or other test. He’s there in accident and emergency. And he’s there when a patient goes home, or onto further rehabilitation.

Graham Carnegy is a hospital porter. And like half a million others, he forms part of the NHS’s workforce of support staff – the domestics, caterers, security staff, gardeners, maintenance teams and the like who may not always be immediately visible but without whom the service simply could not function.

Care is what matters

If you ask Mr Carnegy to describe his job, he offers a simple but powerful sentence about the contribution he and his colleagues can make.

“It’s not medical, it’s not surgical, but it is care,” says the porter at Wishaw General Hospital in the centre of Scotland. “I may not have [clinical] qualifications,” he adds, “but I’m making sure the patient is OK.”

It is a message that was emphasised through HSJ’s Inquiry on Maximising the Contribution of NHS Non-Clinical Staff. The inquiry’s final report, published late last year, concluded the value of this part of the health service workforce was quite simply beyond doubt. The question, it suggested, was just how to support and promote their contributions.

For Mr Carnegy’s employer, the answer has been through the introduction of a new training programme. Dubbed “Serco Cares”, the programme draws on extensive evidence that a patient’s mental attitude can have an impact on their recovery from illness or injury – and that support staff can affect that attitude.

The course was [about] understanding situations, and that you can make a difference to a patient’s day – it could be that during a 10 minute walk I got them laughing, when they’ve not laughed in a week

“We’re not here to teach staff how to smile,” emphasises Andrew O’Donnell, who is the Serco contract manager at Wishaw Hospital. Almost 400 of his colleagues have now been through the programme, which Serco plans to roll out across all its sites. “We’re here to let them know what they already do, and the difference that makes to patients.”

Adds Mr Carnegy: “The course was [about] understanding situations, and that you can make a difference to a patient’s day – it could be that during a 10 minute walk I got them laughing, when they’ve not laughed in a week.

“That’s one of the big things I took from Serco Cares – is that recognition we are making a difference to patients.”

Designed by customer experience design organisation ExperienceLab, the programme runs over three sessions. Death by PowerPoint is not a feature. Instead, Mr O’Donnell talks of working through scenarios.

“So one of the employees plays a patient in the wheelchair, and we’ll go through a scenario where a porter is not speaking to them. Then we ask: ‘So what could you have done differently there?’ And we get the feedback from them. They learn from each other.”

That learning includes sharing ideas about what already works, and formalising them. But the course also encourages staff to speak up when something is going wrong.

“The stage we want people to get to is when they recognise something might not be right, they know that somebody’s going to listen to them about it, and know they have a responsibility to raise that issue,” explains Stephanie Gray-Roberts, a nurse and now director of clinical governance at Serco.

She firmly believes clinical excellence can only be achieved if support staff feel that empowerment and have that recognition. “If the NHS cannot see the advantages of doing that, for everyone – patients, staff, the whole of the NHS – then I think it would be very sad. And I think if it doesn’t start to take this seriously, then it worries me what the system will look like in the future.”

Taking it seriously will, she argues, mean a financial recognition of support staff’s value. “If we are saying that they are are important part of patient outcomes, that should be reflected in the way that we treat them. Not just on a day-to-day basis, but in terms and conditions and remuneration as well.”

She appreciates that will be “a difficult hill for the NHS to climb” given the current climate, but also argues there’s an invest-to-save argument at play.

“If we’ve got an empowered, committed, engaged, caring workforce, then it will definitely make a difference with the recruitment and retention and agency situation.”

Ms Gray-Roberts believes that difference won’t just be in the support staff workforce. She also hopes Serco’s programme could ultimately increase numbers of nurses and allied health professionals, since it is intended to provide a formal career pathway into care for those staff who want it.

Meanwhile, Mr O’Donnell is in no doubt that the programme leaves staff fully convinced of the value of any support role. “A lot of time before the training, staff would say: ‘I’m only a domestic’, ‘I’m only a porter’,” he reports. “Now they say: ‘I’m a porter.’ We don’t get that prefix any more.”