In this week’s North by North West:

The geographical boundaries of some sustainability and transformation partnerships make reasonable sense.

The 10 boroughs of Greater Manchester are interconnected in multiple ways beyond the NHS, while most of Lancashire and south Cumbria at least shares a single council.

Cheshire and Merseyside sits at the other end of the spectrum, with its STP sprawled across nine local authorities, 12 clinical commissioning groups, and a whopping 22 NHS providers.

The resulting lack of coherence has therefore been unsurprising, but also has real implications for patients; the STP has been one of the main losers in the competition for national capital funding.

With a new round of five-year planning now required, the region’s leaders will need to find a way to make the STP function more effectively.

To that end, I’m told additional capacity has now been commissioned by the regional leadership, in the shape of former SHA chief Sir Ian Carruthers and widely-travelled health consultant John Bennett.

The pair will be holding a series of engagement meetings with local leaders over the next few weeks, to come up with a broad level diagnosis.

One priority will be to help develop the system leadership role for the STP, which is still formally led by Mel Pickup (alongside the small matter of running Warrington and Halton Hospitals FT).

Likely priorities beneath that will include provider consolidation, ensuring stability in Liverpool through its big hospital merger, and finally bringing about clinical reconfiguration in East Cheshire and Southport and Ormskirk.

The most obvious candidates for consolidation would be the small widely-spread providers which don’t fit comfortably into the emerging integrated care models.

Bridgewater Community Healthcare, which operates on the fringes of Merseyside and Greater Manchester, is about to get 30 per cent smaller when its Wigan services transfer to the acute trust.

The trust’s finances have already been heading in the wrong way quickly, and the writing has basically been on the wall for standalone community trusts since the Kirkup report into serious quality and governance failings at Liverpool Community Health Trust.

It’s not yet clear where the Bridgewater services will end up, but its remaining core adult services will be left in Warrington, Halton, and St Helens.

North West Boroughs falls into a similar category. It is already collaborating heavily with Mersey Care, but again, it’s not yet clear where that will end up.

There is broad consensus for merging the Royal Liverpool and Aintree, which is due later this year, but the timing could be better.

Both trusts are now struggling on performance and finance, and the major upheaval of moving services into the newly-built Royal should have been out of the way by now (the project has been badly delayed by Carillion’s collapse).

There are clearly risks around sticking two struggling organisations together, and the departure of key senior figures such as the Royal’s chief executive Aidan Kehoe and chief operating officer/chief nurse Lisa Grant creates a concerning leadership vacuum over the summer.

Major reconfiguration of services in Southport and East Cheshire has been on the regional to-do list for years, and the original STP plans attempted to get this conversation started.

Political sensitivities and day-to-day pressures have made progress difficult, but perhaps some independent input will start to nudge things along.

The NHS staff survey is one of the best indicators of how well an organisation is functioning and what the quality of services are likely to be as a result.

Its indicators also suggest several trusts in the north west deserve more recognition than they tend to get.

The tables below rank trusts for their scores on the key indicator – staff recommendation of the organisation as a place to work or receive treatment – over the last three years. 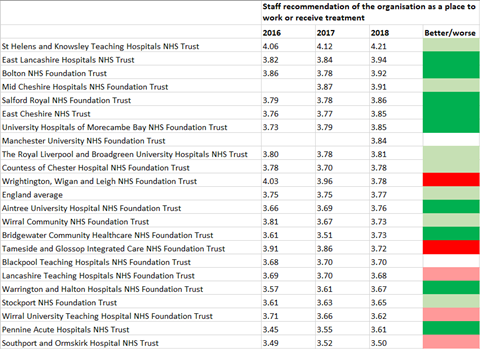 * Mersey Care FT’s score was not comparable with previous years