Analysis: Managing to the RTT target

But the world is not ideal, and there are many competing priorities. So the NHS has been given statutory access standards for elective care in the form of referral-to-treatment waiting time targets. The intention is that the NHS will respond to these targets in ways which keep waiting times down even when other pressures come to bear.

The going has recently got tough because capacity has not kept up with demand, and waiting times are longer than the targets envisaged. When managers try to achieve the targets, they find they are not always aligned with the needs of patients. Trying to deliver targets directly under these circumstances can be referred to as ‘managing to the target’.

There are several targets at the moment.

There is the statutory target that no patient should wait longer than 52 weeks RTT. This is a backstop which we will not be looking at here.

Then there is the statutory target that 92 per cent of RTT patients should be waiting no longer than 18 weeks. This has not been achieved nationally for some years, and even financial penalties for breaching it have been set aside.

In its place is a planning ‘ask’ to stop the RTT waiting list from growing. The intention behind this is that things should not get any worse.

Finally, there are moves to replace 92 per cent within 18 weeks with an average waiting time target; this is currently being field tested, and may or may not be set at 8.5 weeks.

These various targets give rise to several questions:

Let’s delve into this using a worked example.

Let’s say we have a waiting list of 27 patients to manage, as listed in the table below. 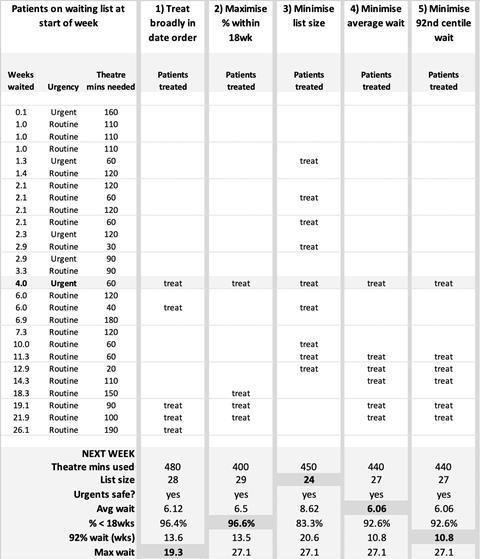 We know how long each patient has waited, whether they are urgent or routine, and how much theatre time each is expected to need. (We’ll use theatre time as the sole constraint to keep things simple, but in real life other kinds of capacity come into play too.)

If we have 480 minutes of theatre time in the coming week, then the question is which of these patients should we book in for surgery?

Before we look at the scenarios, let’s get one issue out of the way: clinical priorities. There is an urgent patient on this waiting list who is about to exceed their safe waiting time; they are highlighted with a grey bar in the above table.

On a strict interpretation of managing to the target, it would be expedient to ignore that patient and keep them waiting. It happens. However, in real life, the NHS does usually try to respect clinical priorities. So, in the interests of comparability, we will always treat that patient in every scenario.

But given that the incentive to neglect them is real, I suggest it would be prudent for the NHS to add protection for clinically urgent patients, initially by monitoring how many are waiting longer than they should.

With that out of the way, onto the scenarios.

The generally accepted principles of waiting list management are that clinically urgent patients should be treated within their safe waiting times, and routine patients should broadly wait their turn in the queue.

Under those principles, the patients we select for treatment are a) the urgent patient discussed above, b) the longest-waiting routine patients, and we will also pick c) a small shorter-waiting case that nicely fills up the theatre list.

This approach is particularly good for reducing the maximum waiting time, which in this example comes down to 19.3 weeks at the end of the week.

Treating urgent patients first and the rest broadly in date order is a process, rather than a target. It partners well with good planning, to ensure capacity is sufficient to keep up with demand and achieve any desired result on waiting times.

Or, to put it another way, managing to the target is not the only way of achieving targets. It isn’t even the best way, as we will see now.

2) Maximise the percentage within 18 weeks

This is the main planning metric for the 92 per cent within 18 weeks RTT target. Trusts submit trajectories showing their expected percentage within 18 weeks for the end of every approaching month, and this percentage is also monitored in most trust board performance reports.

In the worked example shown in the table below, three over-18-week patients have been chosen for treatment. However, the very longest-waiting patient has not been chosen, because that patient needs as much theatre time as the next two patients combined.

We do this because we are managing to the target now, and we want to maximise the number of long-waiters we treat. It makes no difference to the percentage whether those patients have waited 19 weeks or 49. So we pack the list with as many over-18-week waiters as we can, which in this case means leaving the complex and time-consuming case waiting.

We are also deliberately wasting 80 minutes of the theatre time available. We could have fitted two more patients in, but the only candidates have waited less than 18 weeks, and treating them would reduce the numerator and therefore the percentage.

It looks daft, but that’s the consequence of managing to the target. We end the week with a very decent 96.6 per cent of the waiting list within 18 weeks. (although it’s worth noting that the patient-centred ‘treat broadly in date order’ process achieves almost the same result).

In this particular example, it looks as though the longest-waiting patient will get their turn the following week. This will not always be the case. In many waiting lists, there is a steady stream of patients feeding through to 18 weeks, and they would persistently take precedence over the heavier case that has waited longer.

It is easy to minimise the list size: just treat the smallest cases and let the long ones wait. In this example, we are able to cut waiting list from 27 to 24 patients in a single week.

In fact, the longest-waiting patient might never get treated under this kind of managing to the target, if a constant stream of smaller cases is always arriving to fill our capacity.

I have to confess I thought minimising the average wait would be an easy one to demonstrate. All we have to do (I thought) is maximise the bang for buck by treating patients with large waiting times and small theatre times — in other words, those with the largest waiting time divided by theatre minutes required.

It wasn’t a bad method, but getting the best result turned out to be a lot more complicated. In the end I had to use Excel’s Solver to work out which patients to treat.

The resulting average waiting time of 6.06 weeks is impressive, but again it is not a great deal better than the patient-centred ‘treat broadly in date order’ scenario which achieves 6.12 weeks.

The final scenario is a variant on the 92 per cent within 18 weeks target, but instead of focusing on the percentage, we focus on the weeks.

This makes quite a difference. It removes the 18-week cut-off between those patients we are incentivised to treat and those we aren’t.

In this particular example, the patients we choose happen to be the same as in the average waiting time scenario, so the outcome is the same too. This won’t always be the case as the incentives are not identical, but it does suggest that many of the benefits of average waiting times might be achieved by tracking the 92nd centile wait instead — and no change to the statutory target would be needed.

The longest-waiting patient was left on the waiting list again in this scenario, because we were able to push the 92nd centile down further by treating a larger number of shorter-waiting patients.

It was telling that the only scenario in which the longest-waiting patient was treated was the ‘treat broadly in date order’ approach. This is a straightforward process that reliably keeps up with demand for heavy cases as well as lighter ones. It is not itself a target, but it is capable of delivering any target if capacity is also planned to keep up with demand and achieve a small enough list size.

In comparison with this patient-centred approach, any form of managing to the target is going to look suboptimal, with some forms looking worse than others.

Minimising the list size was probably the worst, as it gave the illusion of keeping up with demand without actually doing so or achieving a decent result on any other measure.

Maximising the percentage within 18 weeks was poor because it wasted so much theatre time, and stored up trouble for the future.

And minimising the average wait was neck and neck with minimising the 92nd centile waiting time in this example, both in terms of performance and in terms of the complexity of the decision-making process when choosing which patients to book.

In this worked example, we were only looking at one week in the life of a particular waiting list — perhaps the field testing reports will reveal more. But it may be that minimising the 92nd centile would be a reasonable alternative to either percentages or averages, and avoid any need to change the statutory target.

Finally, let’s remember that clinically urgent patients are sometimes kept waiting longer than they should (and the targets incentivise it), which is a genuine clinical risk to those patients, and it would be prudent at least to start monitoring this.