The English waiting list grew again in June. It needs to shrink decisively this autumn to avoid trouble on 18 weeks over winter. But a longer queue means longer waits.

The English waiting list grew again in June towards its seasonal peak, and set a new record for the largest waiting list since January 2008. At the end of the month just under 3.2 million patients were reported waiting, which becomes just over 3.4 million if you add non-reporting trusts back in.

‘If the waiting list continues to swell, no amount of clever patient scheduling can prevent an eventual breach’

This growth must now be reversed if waiting times are to be kept under control.

The usual seasonal pattern is for waiting lists to shrink in the autumn months, which needs to happen decisively this year to sustain 18 week waits over winter. A longer queue means longer waits, so if the waiting list continues to swell then no amount of clever patient scheduling can prevent an eventual breach of the 18 weeks standard.

Nevertheless, for the time being the 18 weeks standard continues to be met nationally, as trusts take advantage of their (now permanent) freedoms to treat routine patients on a first come, first served basis.

NHS England abolished the “admitted” and “non-admitted” targets on 4 June, making permanent the amnesty that was in place for most of 2014-15.

In response, trusts continued to treat large numbers of long waiting patients, to hold down the number of long waiters left on the waiting list and achieve the retained “incomplete pathways” target at national level. 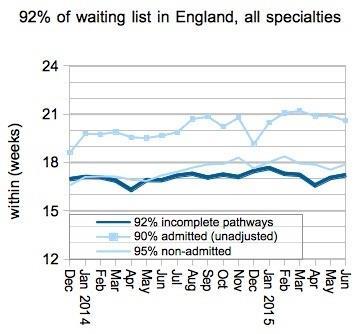 Medway Foundation Trust resumed its waiting list reporting, which is good news. But the Lewisham Hospital site stopped reporting, which has required a bit of jiggery-pokery to add them back in to the table below (which uses the same method as the official statisticians).

NHS England is now clamping down on non-reporting trusts so we should see fewer trusts dropping out of the data and more trusts resuming their submissions (though not necessarily accurately), in the coming months. 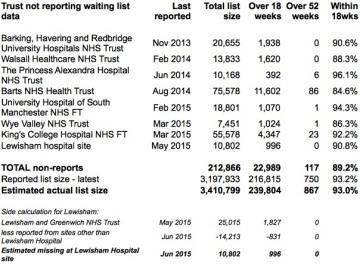 Non-reporting trusts are excluded from all the following data, so the true list size is much larger than shown in the following chart. Either way, it is the largest waiting list since January 2008 (before the 18 week targets were first met). 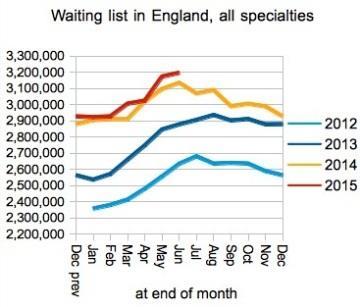 Admissions per working day were comparable to recent years, which is clearly not enough given the rising waiting list. 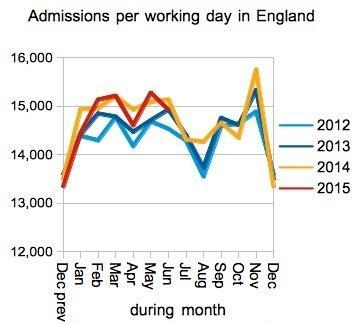 The number of one year waiters has risen again, mainly because University Hospitals of Leicester Trust have been cleaning up their waiting list data and found a lot of very long waiting orthodontics patients.

It’s always good to get errors like this out in the open because then they can be dealt with properly – a theme we will come back to when we look at the local picture. 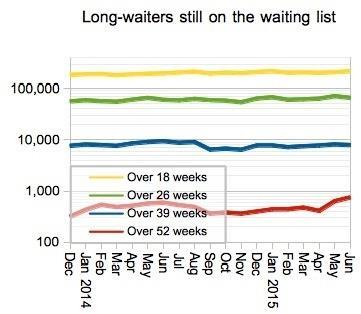 Most surgical specialties are breaching the target, with only ear, nose and throat, ophthalmology, oral surgery and gynaecology remaining within 18 weeks (plus all the medical specialties). 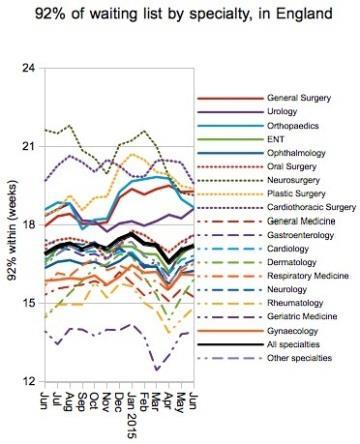 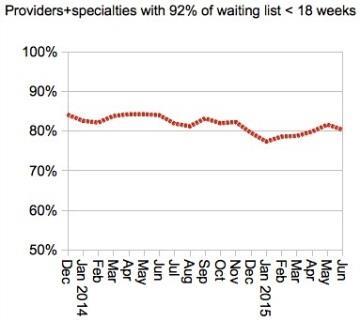 There is also little change in the distribution of waiting times across local services, although longer waiting services have deteriorated since a year ago. 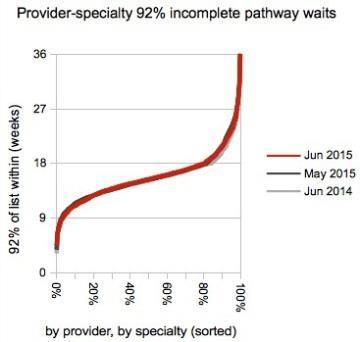 Perverse waiting list management (giving short waiting patients priority over long waiters) has been fairly rare since the amnesty on perverse targets began last summer, and it is happily getting even rarer now that the amnesty has been made permanent. 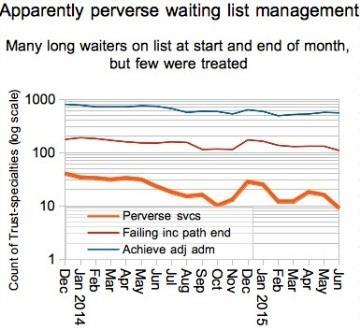 Medway has resumed its waiting list reporting, and jumped straight in at the top of the table of long waiting providers. Hopefully we will see it improve quite rapidly over the coming months, now that it has improved its data and can see where its problems are.

Which, by the way, is exactly what has been happening at the Robert Jones and Agnes Hunt Orthopaedic Hospital FT.

After excluding long waiters from its data over a long period, it started reporting long waiters properly in February’s data, when it also jumped straight in at the top of the table.

In the latest June data it has succeeded in dropping off the table entirely, going from 12th to 37th place as its “92 per cent” performance improved from 20.7 to 18.0 weeks. Well done the Robert Jones. 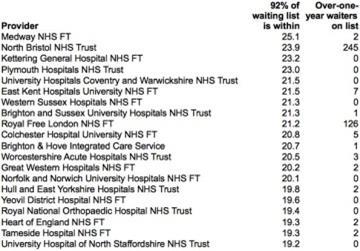 Data for July is due out on 10 September and is the first full month since the permanent abolition of the perverse “adjusted admitted” and “non-admitted” targets.