In an open email, Lisa Rodrigues outlines why chief executives should set an example and sign up for NHS Change Day 2015

It is unlikely you open your own emails any more. It just isn’t practical. Most NHS chief executives get circa 200 per day – and that’s with a decent spam filter.

You probably have a person in your office who reads them and a system to alert you to the ones you need to see urgently in between back to back meetings, visits and phone calls that start anytime from 7am and could go on 24 hours a day if you let them.

The emails to look out for come from patients or their families, members of your exec team, your chair and nationwide emergency department samples, any one of your 30 or so elected governors, clinical commissioners, NHS England, the Care Quality Commission, and Monitor/the NHS Trust Development Authority.

Not to mention MPs, elected council members, HM Coroner, senior colleagues in partner organisations, various medical, nursing and other professional regulators and representatives, the health and safety executive, the police, patient safety organisations, patient representatives including solicitors and other advocates, the media, the unions, your IT suppliers…

Plus members of your staff. And enthusiasts like me.

You have probably heard of NHS Change Day. Maybe you are one of the chief executives who agree with this tweet:

Actually I went to that event. I wasn’t paid. Most of the “50+ people” (actually around 30) were student nurses, recently qualified clinical staff or new managers.

Most were using their annual leave or days off.

One F2 doctor arrived straight from a night shift and went back to work the following night after limited sleep. We stayed overnight in a budget training centre so we could work late and start early the next morning. Everyone worked extremely hard.

Apart from another, briefer meeting at the end of January, NHS Change Day 2015 has been arranged entirely through using social media and teleconferences.

People work in their own time, including at weekends. These young and not so young folk are some of the brightest and most radical thinkers I have ever met. None have been selected, they are all volunteers.

They are also more facilitative and thoughtful in their style of working with each other and with colleagues at all levels across the NHS than I have come across in any group anywhere. It is an utter privilege to be involved with them.

NHS Change Day is now in its third year. It is an extraordinary phenomenon.

It is about the future, for patients and staff, many of whom, like me, are also patients.

‘What Change Day does is place the control where it belongs, with staff themselves’

As one newly qualified nurse said via WhatsApp on the Sunday afternoon I was writing this: “The guys at the top are working really hard on NHS improvements. If grassroots members of staff try to make their own changes too, we will see a positive impact on patient wellbeing and potentially on safety and treatment.”

Without giving you a whole load of statistics, suffice to say that people are most negatively affected by stress at work when they feel that they lack control. What NHS Change Day does, in a nutshell, is place the control where it belongs, with the staff themselves.

The suggested campaigns that have been developed for NHS Change Day 2015 are based on extensive evidence about what makes a difference to patients and staff.

The first three, #TimeToChange, #DementiaDo and #MaternityExp are already up on the NHS Change Day website, with the others being added between now and NHS Change Day itself on 11 March.

You can read about them here. Each has a brief narrative and a list of possible actions. There are also stories from patients and staff about the difference these things can make.

The campaigns are of course only suggestions. Staff can commit to any action that will make a difference, either individually or agreed with each other to assist with the extremely pressing priorities that every single member of NHS staff is feeling right now. Including you.

Maybe something about making time for the things that matter?

There’s no big jamboree event this year. Each team and trust are doing their own thing.

But there will be a 12 hour live broadcast to watch and participate in via computer screens and smartphones. In such tough times, our staff need as much collective encouragement and support as we can give them.

So if you haven’t had an email yet from someone about NHS Change Day, please find out what is happening at your trust.

Please use the power of your eloquence and your position to persuade senior colleagues that this is the best patient experience, service improvement and staff engagement tool ever invented.

And please set an example and sign up personally to an action, as Simon Stevens did here: 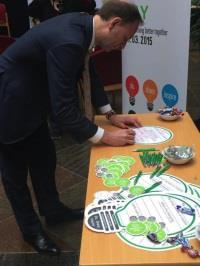 And then please stand back and allow NHS Change Day 2015 to be the game changer it has the potential to be.

Lisa Rodrigues is a writer and mental health campaigner