In the second part of our Respect for NHS Managers campaign, Andy Cowper offers a timely reminder for electioneering politicians to tell the truth

Last December, to kick off the HSJ/Managers in Partnership Respect for NHS Managers campaign, leaders representing doctors, nurses, allied health professionals and patients called on politicians to treat NHS managers fairly in the forthcoming general election. They did so because, as advocates of staff and patients, they know NHS managers do a vital job within the healthcare team.

‘We are helping politicians get it right by debunking these myths’

All the main political parties responded by promising to honour the spirit of the campaign. But, in case there is any backpedalling, we have compiled this mythbuster to keep them honest.

Politicians often acknowledge the importance of managers in private, but then fail to present that view in public. This helps to perpetuate myths about lazy, hazy managers. We are helping politicians get it right by debunking these myths.

The political failure to value managers is bad for patients. Evidence that healthcare management is directly linked to quality of patient care continues to pile up.

Managers are a crucial group. They are charged with keeping the public safe, supporting clinicians in their life-saving and life-improving work, and making scarce resources go further than ever. Negative political rhetoric not only damages morale and retention, it also gets translated into policies that undermine good management: look no further than endless, often pointless restructuring and pay freezes targeted at managers.

Take away the manager and patients will find it more difficult to navigate the complex health system and access services that are shaped to meet their needs.

HSJ and MiP will launch the third stage of our campaign after Easter to ensure that those politicians who fail to treat NHS managers with respect are held to account.

MYTH 1: NHS managers are unnecessary – only doctors and nurses are needed 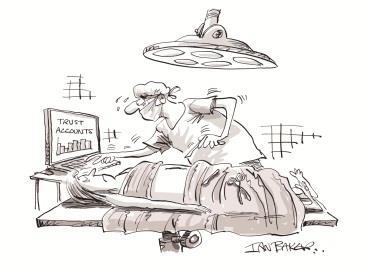 Oh dear. Does anyone seriously think that the 21st century’s technologically driven healthcare, focused on improving outcomes, quality and patient safety, can be delivered without proper systems, appointment booking, record keeping and safety checks? These are some of NHS managers’ many vital, often unseen roles.

To understand managers’ value, consider another safety critical industry: air travel. The equivalent of “the NHS just needs doctors and nurses” would be saying “an airline just needs pilots and cabin crew”. OK, you won’t get far without them.

‘Take out the managers and the clinicians either sacrifice care to manage process; or focus on care and process falls apart’

But would you get on a flight by an airline without well trained engineers checking the plane’s mechanics, or online booking, or auditors checking the quality and quantity of the fuel, to say nothing of a well functioning air traffic control system?

NHS managers have two broad tasks: managing equipment, infrastructure and systems; and managing people and teams. Both are vital. We need clinical directors and directors of nursing to ensure that the NHS provides clinically safe, evidence based care. Equally, we need to have enough sterile blades, swabs and dressings; reliable laundry, catering and cleaning; and properly maintained buildings.

Each of these tasks is checked and coordinated by a manager. The NHS spends nearly £2bn of taxpayers’ money every week on providing a universal, comprehensive health service that is based on need and not ability to pay. That requires managers to run it accountably, equitably, fairly and safely.

As one HSJ reader commented at the start of the Respect for NHS Managers campaign in December: ‘Take out the managers and the clinicians either sacrifice care to manage process; or focus on care and process falls apart.’

The 2011 independent report, NHS Staff Management and Health Service Quality, said: “Good management of NHS staff leads to higher quality of care, more satisfied patients and lower patient mortality. It also demonstrates how good staff management offers significant financial savings for the NHS, as its leaders respond to the challenge of sustainability in the face of increasing costs and demands.

“The more positive the experiences of staff within an NHS trust, the better the outcomes for that trust.”

The National Institute for Health Research’s 2013 review, New Evidence On Leadership and Management, found that around a third of hospital staff have substantial management responsibilities, many working in dual roles as clinicians and managers.

However, they do not always get the right support for their management role – a point echoed in the Chartered Management Institute’s 2013 Management and Leadership Health Check.

MYTH 2: There are too many NHS managers 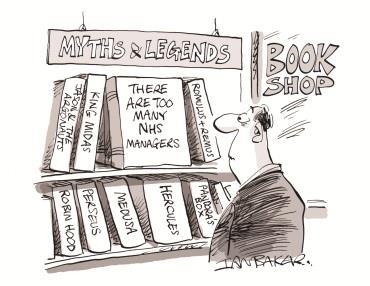 In context, Office for National Statistics data suggests that the proportion of managers in the UK’s workforce as a whole was 15.4 per cent in June 2010.

A pithy analysis by the King’s Fund notes that the percentage of managers in the NHS seems to be about one-third of the level found across the economy nationally.

And its latest quarterly monitoring review showed an 18 per cent reduction in NHS managers since 2010.

The think tank’s authoritative 2011 inquiry into the future of NHS management and leadership in the NHS, No More Heroes, commissioned original analysis on this topic, which concluded: “There is no persuasive evidence that the NHS is overmanaged and a good deal of evidence that it may be undermanaged.”

Evidence to that inquiry found that commissioning organisations spent just 1-2 per cent of their budgets on management, comparable with only the most outstandingly frugal charities. It noted that a single clinical directorate in a hospital with a management staff of three might manage a £40m a year business in an organisation with a £350m annual turnover.

Put simply, only one in thirty-five NHS staff is a manager. The NHS spends much less than 10 per cent of its money on administration. 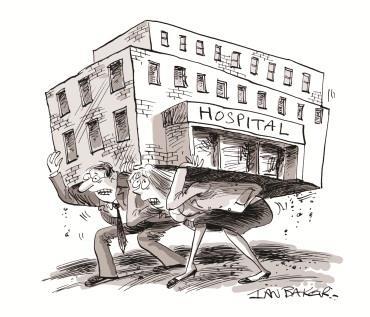 The idea of the NHS managers as faceless bureaucrats is as out of date as the typical GP being a tweed clad, golf loving, pipe smoking patriarch.

For a start many NHS board meetings are held in public, and an increasing number of managers are active on social media.

Equally NHS managers, many with a clinical background, are often an integral part of multidisciplinary teams, so they are far from “faceless” to their colleagues.

The caricature of “men in grey suits” will also come as a surprise to the 60 per cent of managers who are women.

Meanwhile, the 40 per cent of executives on most provider boards who are clinicians, as nursing directors and medical directors, may object to the “bureaucrat” tag.

Former cabinet secretary Sir Gus O’Donnell made a useful point about bureaucracy in his 2013 BBC Radio 4 series In Defence Of Bureaucracy.

Sir Gus, who was successful at the centre of government for many years, suggested that bureaucracy in the public sector is associated with a need for consistency, openness and transparency in a universal system. He argued that “without rules and processes, society would fall apart”.

As the King’s Fund inquiry into the future of NHS management and leadership noted: “Politicians of all parties who criticise the bureaucracy within the NHS should recognise they cannot have their cake and eat it.

“Some of the things they desire of the future health service – greater transparency, comparable performance data to inform choice, drive accountability and improve quality - all come at a cost.” 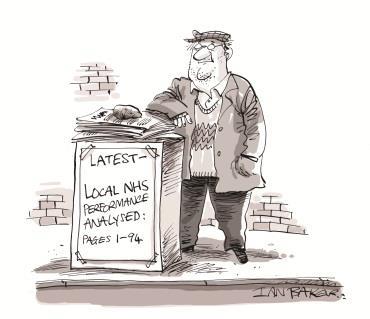 Oh, the hollow laughter in the senior management community at the notion that they are unsackable.

More than a third of NHS trusts have vacancies on their boards, according to the King’s Fund’s 2014 Leadership Vacancies in the NHS, and the average time in post of an NHS chief executive is 2.5 years.

By way of comparison, research by football analysis website Football Perspectives found the average tenure of a professional football manager is only slightly shorter, at 23 months.

We should also challenge perceptions of a “revolving door” for managers. First, NHS managers do not usually want to be made redundant. Second, for some decades the NHS has not been “one” organisation, but a series of standalone trusts and commissioning organisations.

Third, someone sacked by Tesco would not be criticised for getting a job with Sainsbury’s (or be expected to pay back their redundancy payment). Fourth, the alternative to re-employment would be to hire expensive “interims” or management consultants.

Fifth, many return on fixed-term contracts, without the benefits of permanent positions.

If we accept training as one valid proxy for quality, the NHS management training scheme has a trophy cabinet full of awards, generates savings per trainee of tens of thousands of pounds, and retains more graduates than other private and public sector schemes.

Likewise, perceptions that managers are “unaccountable” sit poorly with a lived reality for many of constant criticism by politicians and much of the media, who treat them as an easy target.

Whenever it comes to holding the NHS to account, politicians and committees take evidence from doctors and nurses, but the people whom they berate and hold to account are managers.

Draw your own conclusions.

MYTH 5: NHS managers are not worth the money they are paid 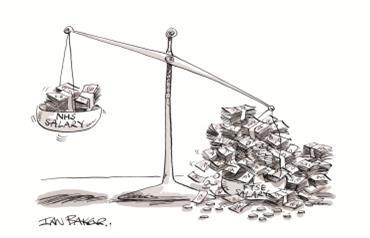 Middle managers are on Agenda for Change pay bands 8a to 8b and senior managers on bands 8c-9 – the very ones taking a hit in the latest pay settlement, with increments frozen and no cost of living increase.

‘There is a limited supply of capable, experienced and willing applicants for very senior managers jobs’

Objections to the pay of NHS board directors and “very senior managers” are most often voiced by passionate advocates of competitive free markets and private sector mechanisms.

It is ironic that fans of Adam Smith’s invisible hand fail to see that the laws of supply and demand apply as much to very senior managers in the NHS as elsewhere. There is a limited supply of capable, experienced and willing applicants for very senior managers jobs: this means demand – and price – is relatively high.

For more evidence, the Hutton review of fair pay in the public sector presents data on median sector earnings, executive pay and top-to-bottom pay multiples, and follows it with contrasting data from the private sector.

FTSE 250 companies have an average income of roughly the same level as the largest NHS trusts, but their bosses get paid nearly six times as much.

Perceived rises in very senior managers’ pay are a statistical misconception, because the NHS has got rid of a significant number of middle-tier managers, which has changed the average.

In 2014 (for the third year running), there was zero increase in the average level of executive pay, across all board positions and across all types of NHS organisation. Data also showed that: