The new year has kicked off with the predictable barrage of political posters.

This now traditional opening foray probably offers more material to be mocked than it does information for the electorate to make its decision, but it does serve to confirm the battle lines on health in 2015.

‘Despite the seeming media consensus that the NHS is close to a winter crisis, the Conservatives’ position has held up’

For Labour, the message is that the NHS as we know it will not survive another Conservative government. It may not yet have the urgency of Tony Blair’s “24 hours to save the NHS”, but give it a couple of months and it will get there.

For the Conservatives, the retort is that we will not be able to afford a health service without a strong economy, and only one party can be trusted to deliver that. Expect to get very bored of these messages before the calendar turns to May.

More analysis and comment ahead of the 2015 general election

If the starting point for political messaging on health in 2015 is predictable, then the position the parties find themselves in with the electorate is more surprising.

Our exclusive polling shows that, despite the seeming media consensus that the NHS is close to (if not in) a winter crisis, the Conservatives’ position on health has held up.

Labour may still be the party the public trusts most with the NHS, but its lead on the issue has halved over the past six months.

What is more, David Cameron is still more trusted than Ed Miliband on the NHS by a small margin.

Given the daily stream of bad headlines on health, these findings are a major surprise.

These figures should be worrying for Labour. The NHS should be the party’s strongest issue and strategists have signalled that they want to make health the centrepiece of Labour’s election campaign.

If the party cannot secure a decisive lead on the issue, then its chances of scoring any kind of victory in May will be seriously undermined.

That Miliband’s personal credibility on the NHS needs to be bolstered has long been recognised. That is why he personally led on a blizzard of autumn announcements, from using the “mansion tax” to pay for more staff to pledges on cancer early diagnosis.

The signs were the strategy was working. He closed the “trust” gap on health with the prime minister but then – curiously – stopped talking about the issue to the public, allowing Andy Burnham to spearhead Labour’s early winter offensive. 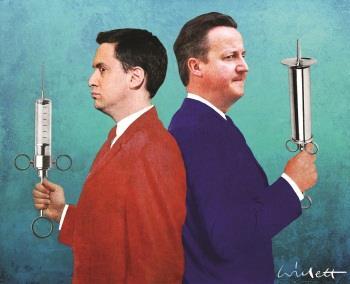 There may be a lesson for the leader of the opposition here.

Cameron has consistently outperformed his party on health and no one but Miliband can neutralise this.

As Labour begins its “health month”, it will be interesting to see the profile adopted by the party’s leader.

There are certainly plenty of voters up for grabs, with nearly half (48 per cent) of the public stating that they either don’t trust any of the party leaders on the NHS or have yet to make up their mind.

If our polling will provide a sobering new year reality check for Labour, there is also not much cause for celebration amongst the other parties.

Over a third (35 per cent) of the public think that standards of patient care in the NHS have got worse in the past 12 months. Forty-three per cent think they have remained the same.

Given the high proportion of the public (41 per cent) who say they don’t trust any of the parties on health or have yet to make up their mind, there is plenty of scope for concern about health to turn into outright opposition of the government’s handling of the NHS.

Nick Clegg’s attempt to personally lead the government’s focus on mental health has yet to translate into public trust – only 4 per cent of the public say they trust him most to run the NHS, less than Nigel Farage (6 per cent). Whether Clegg’s move to be the first politician to commit to fully meet the £8bn funding gap identified by NHS England can do anything to shift this remains to be seen.

Early in the NHS winter

Funding is one area where the public appears to be ahead of politicians.

Despite – or perhaps because of – the spending commitments made on the NHS, the public’s willingness to pay more income tax to fund health services has actually hardened.

Of those who expressed an opinion, two-thirds (66 per cent) now say that they would pay at least 1p extra in tax.

The finding comes as Simon Stevens has signalled that he feels the argument over health funding in the next Parliament is far from won.

With the Liberal Democrats having made the first move to bridge the NHS Five Year Forward View funding gap, it will be interesting to see if (and when) the other parties match this, or whether indeed any party will actually spell out how it proposes to pay for it.

‘Despite many announcements and much heated debate, no party has succeeded in shifting public perceptions’

As we enter an election year, one of the key political battlegrounds remains a stalemate.

Despite many announcements and much heated debate, no party has succeeded in shifting public perceptions (and voting intentions).

Labour’s lead on the issue looks anything but certain, but the Conservatives will be aware that many voters have yet to decide and a bad winter could make up their minds for them.

It is still relatively early in the NHS winter and there is every chance that events could lead to the dramatic shift that politicians have so far failed to deliver.

Mike Birtwistle is a founding partner of Incisive Health