This week End Game muses on Andrew Lansley’s next move, admires one trust’s decor and we’ll be booking a table at a hospital restaurant 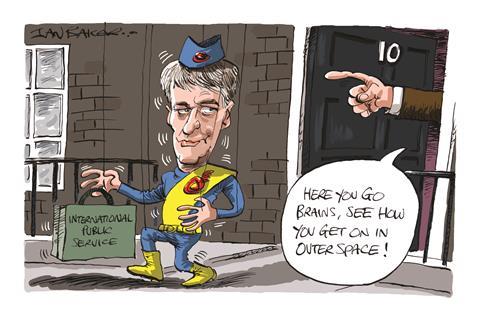 End Game misses Andrew Lansley because more than any health secretary before or since, he is the most likely to have pored over every last word in HSJ, most probably with a highlighter in hand.

‘Might there be a top-down reorganisation of the entire world brewing?’

Seemingly one of the losers from the prime minister’s transfer market antics last week, Mr Lansley’s demotion from the Cabinet heralds the end of his contribution to Westminster politics.

Once reshuffled out, he reportedly went round telling all and sundry that he is to be taking up a role in “international public service”.

What could this possibly be? Might there be a top-down reorganisation of the entire world brewing?

Perhaps Mr Lansley will join the ranks of the almighty International Rescue, home to the crime fighting Tracy brothers and their zippy Thunderbird aircraft.

While we apologise to all those who made exactly the same joke when David Miliband went to work for the same organisation, we were reminded that an integral part of the brothers’ set up is Thunderbird 5, their orbital satellite station.

Once posted there, the former health secretary would finally be able to confirm Sir David Nicholson’s assertion that Mr Lansley’s reforms were so ambitious one could see them from space.

A+ for alphabetical ambitions

Phone book aficionados may well be familiar with overzealous attempts to secure the coveted first place listing with dodgy nomenclatures like Aardvark Plumbing. But such name gaming has sadly gone the way of paper directories, the dodo and belief in Brazilian footballing genius.

How nostalgic then to receive a communication from the American Association for Accreditation of Ambulatory Surgery Facilities.

While AAAASF may be one of the most obscure healthcare bodies we have come across, it will forever be remembered as the most alphabetically ambitious – unless you know better, of course.

End Game enjoys a dismal hospital passageway as much as anyone but we were especially delighted on a recent trip to Basingstoke and North Hampshire Hospital. The corridor in question, which leads to the hospital’s necessarily unglamourous and utilitarian pathology department, is brightened up by an incongruously uplifting image.

The floor to ceiling mural is 10 feet wide and features an idyllic meadow with bunny rabbits frollicking around a pot of gold at the end of a weirdly coloured rainbow. Dolphins cavort in a paddling pool, playfully bouncing a heart shaped balloon with their snouts.

“Is that a better care fund explanation mural?” wondered HSJ columnist Your Humble Servant on Twitter.

Nope! While the painting would make a cheery addition to any acute facility, we learned that the hospital served as a set for the decade old Channel 4 sitcom Green Wing.

The corridor stood in for the fictional hospital’s children’s department, and – proud of its association with eccentric and quite rude TV comedy – hospital bosses never had it painted over.

Long may it continue to tickle the souls of all those trudging off to the lab clutching a vial of their own urine.

End Game applauds the irony of the decision by a patient at Nottinghamshire’s Wathwood Hospital to name an onsite restaurant Section 17. The mental health hospital’s eatery – staffed by patients – takes its name from a section of the Mental Health Act that grants patients leave into the community.

While End Game is genuinely impressed by the initiative, designed to help patients gain skills and confidence, it is an odd name for the business considering its staff cannot actually leave the premises.