Longer queues mean longer waits: the elective waiting list in England is edging towards breach as the number of patients waiting for hospital treatment in England shot up in August

The number of patients waiting for hospital treatment in England shot up in August, and waiting times took another step closer to breaching the main 18 week referral to treatment target nationally.

The English waiting list usually peaks in the summer, but even so, this year’s increase was an August record. After adjusting for trusts that started reporting their waiting lists again, the waiting list grew by some 40,000 patients in August, which comfortably beats the previous record of 34,000 set in 2008.

A longer queue means longer waits, and performance against the main 18 week target edged up from 17.4 weeks in July to 17.6 weeks in August. All the gains made in the run up to the general election have now been reversed.

Of the major surgical specialties, only gynaecology, ophthalmology, and ear, nose and throat (just) are still achieving the 18 week target.

At the end of August, 92 per cent of the English waiting list had waited up to 17.6 weeks since referral, which means the NHS is getting close to breaching the 18 week target. Waiting times came down at the start of the year in the run up to May’s general election, but those gains have now been reversed despite the NHS treating large numbers of long waiting patients. 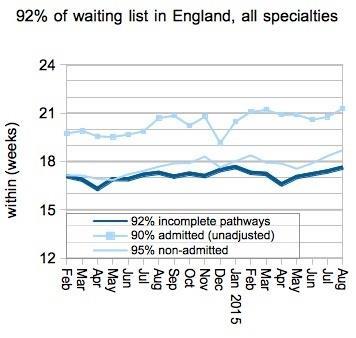 Before we start looking at the size of the waiting list, we need to remind ourselves that plenty of trusts are still not reporting their data and this makes a significant difference to the totals. On the plus side, it is good to see both University Hospital of South Manchester Foundation Trust, and Lewisham and Gravesham Trust reporting their data again in August. 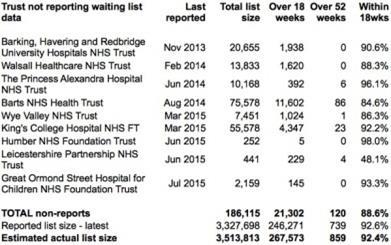 According to the official figures which are charted below, the waiting list grew by 67,420 patients in August. After adjusting for trusts rejoining and leaving the data series, that growth becomes 40,446 which is still the largest August growth since RTT data collections began. The waiting list needs to shrink now in the run up to Christmas to avoid breaching the 18 week target. 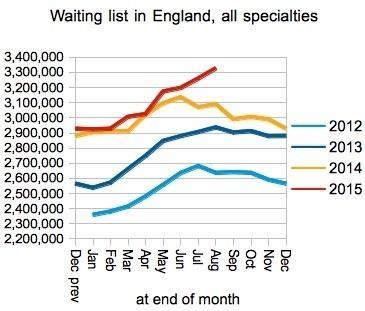 Inpatient and daycase admissions per working day are plodding along at 2014 levels, which is plainly not enough against a background of rising demand. 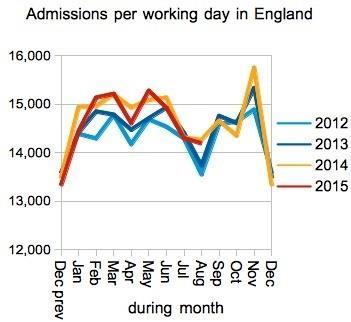 Long waits have been creeping up too, although these figures cannot be relied upon because so many trusts are not reporting their waiting list data. 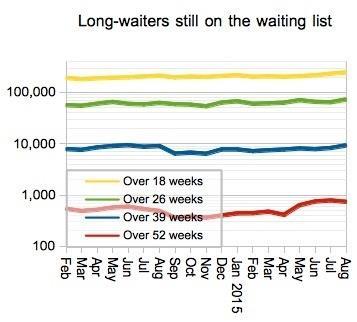 At specialty level, ear, nose and throat narrowly missed a national level target breach in August, with 92.04 per cent of the waiting list within 18 weeks against a target of 92 per cent. Failure is so widespread now that every surgical specialty except ear, nose and throat, ophthalmology and gynaecology is now in breach - oral surgery being the latest to cross the line. 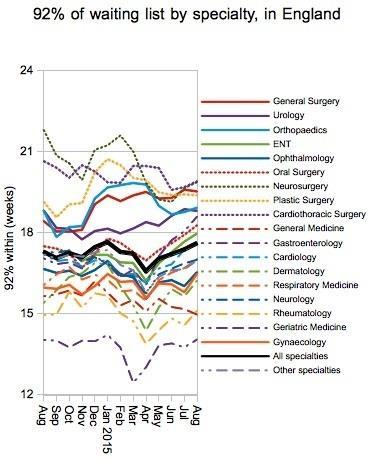 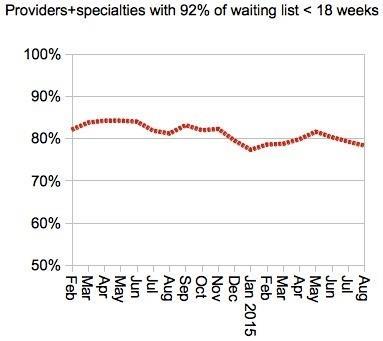 The deterioration in waiting times was remarkably evenly spread across all those services. 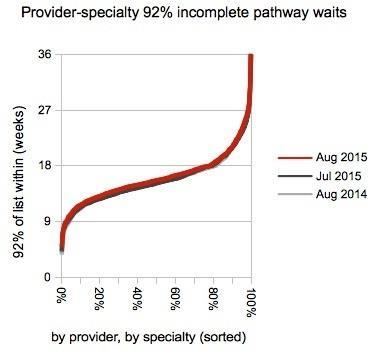 Medway FT continues to top the table, and its performance deteriorated again in August from 26.7 weeks to 28.8 weeks. North Bristol Trust continue to report the greatest number of patients still waiting more than a year since referral, most of whom are in orthopaedics. 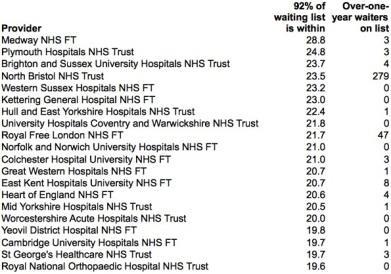 Three trusts dropped out of the top 20 but none reduced their waiting times below 18 weeks.