As NHS leaders contemplate a wholesale shift in the way care is delivered, a survey of 302 GPs, clinical commissioning group leaders and provider chief executives by HSJ, in conjunction with advisory firm FTI Consulting, reveals the obstacles reformers are likely to face.

The survey asked for respondents’ views on proposed new care models – such as multispecialty community providers (MCP) and primary and acute care systems (PACS) – as well as the broader transformation of the NHS.

Although all three groups admitted to having little concrete knowledge of the MCP or PACS models, there appeared to be a preference for MCPs: 73 per cent of GPs, 74 per cent of provider chief executives and 96 per cent of CCG leads said they were “supportive” of the idea.

By comparison, just more than half of GPs (58 per cent), 85 per cent of provider chief executives and 68 per cent of CCG leaders said they would support the PACS model.

This preference appears to be based on the perception that the MCP model will bring more advantages to respondents’ local areas: more than half said MCPs would bring a greater range of primary care services, or new ways to deliver care, and strengthen the provision of primary care.

More from the HSJ annual lecture

Yet respondents were aware of the possible obstacles to the MCP model. CCG leads and provider chief executives in particular cited possible conflicts between the new organisations and larger, traditional providers.

In the words of one provider chief executive, they were worried “the GP community does not have the skills or capacity to lead the scale of transformation required”.

CCG leads were most worried that the PACS model would increase the dominance of secondary care (77 per cent) and weaken provision of traditionally neglected areas, such as mental health services.

GPs also expressed fears that the model would undermine primary care in their area (59 per cent). 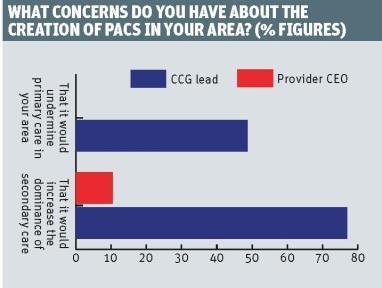 When asked about new care models and the broader objectives of transforming care delivery, GP respondents were more sceptical than their CCG and provider peers. Most GPs voiced concerns about the future of their practices, financial constraints, workforce pressures that could limit their ability to improve services and the need for further incentives to make new care models work.

Among the key findings were:

Survey respondents reiterated the importance of financial investment and political support: two thirds said sufficient funding would be needed on a national level, despite policymakers’ optimism about the efficiencies that are possible.

Most are unconvinced that politicians, the public or the media have a realistic understanding of the necessary resources or timeline required for the new care models.

Consequently, most respondents say national bodies need to be more honest about the time needed to develop new services and the risks involved.