Online therapy and technology can turn round tragic suicide numbers 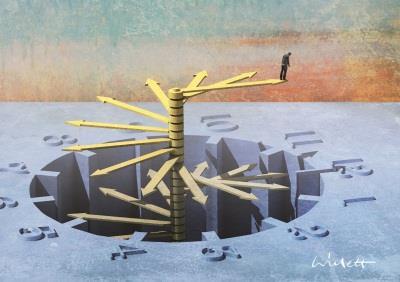 The latest Office for National Statistics data, published last month, revealed a 4 per cent increase in suicides – 252 more people killed themselves than in the previous year. These are truly awful figures.

But we could have stopped many of them. Suicide is the culmination of a series of triggers or factors that lead to a slide into mental ill health. That means it is preventable in many cases.

This may sound like a fanciful idea, but in reality the aspiration is grounded.

Clegg’s inspiration was the remarkable reduction in suicides seen among depression patients in Detroit, where the rate of suicide has been reduced dramatically, if not quite to zero.

As a cognitive behavioural therapist with more than 27 years’ experience, I firmly believe that early intervention is key.

Suicidal thoughts generally develop over time, so the quicker a vulnerable person gets help, the less likely they will be to take their own life.

So it is welcome that the government is finally bringing in waiting times targets for mental health to start making the much vaunted notion of “parity of esteem” a reality.

From 1 April most patients who need talking therapies for conditions such as depression will be guaranteed the treatment they need within a maximum wait of 18 weeks.

But for some people with anxiety or depression, most of whom will be referred to the NHS’s face to face mental health therapies under the umbrella of Improving Access to Talking Therapies (or IAPT), even this will be too long – if it is even achievable under the current system.

The new waiting times are going to require a huge expansion in access from where we are now.

The programme - the government’s flagship mental health access scheme - aims to be treating 15 per cent of adults who might benefit from mental health psychotherapies by April this year. And half of those who receive talking therapies should reach “measurable recovery”.

But the existence of these targets imply that we are only treating a relatively small proportion of people whose lives could be improved by therapy.

So we need to explore new ways of offering patients with depression and anxiety disorders the help they need.

As with so many other areas of the NHS, the possibilities of technology are starting to make this more than just a pipe dream.

Our model at Ieso Digital Health provides one piece of the jigsaw. Discreet one to one cognitive behavioural therapy is delivered in real time, with patients meeting a British Association of Behavioural and Cognitive Therapies accredited therapist in a secure virtual environment, at a time and location that is convenient to them.

The method is suitable and accessible for most people, with patient and therapist communicating through written conversations using their internet enabled device (laptop, PC or smartphone). Patients get a first appointment within days rather than weeks.

This doesn’t just improve access to therapy – it transforms it. And because we are already being commissioned by 20 clinical commissioning groups across England, our service is free for some patients to access on the NHS.

We are receiving 500 referrals a month through GPs and self-referrals, and this number is growing rapidly.

We treat the same spectrum of mild to severe mental illness as IAPT services. Indeed, in many instances we treat more difficult cases because we get the patients IAPT cannot help.

Our data shows that on average 52 per cent of Ieso Digital Health’s patients reach recovery, compared with 45 per cent for IAPT nationally.

Because it is a convenient service that fits around people’s lives, patients are more likely to attend their sessions than other IAPT services and on average need 50 per cent fewer sessions to reach recovery.

Our research indicates that this is because people often open up more readily when they are not talking to a therapist in a face to face situation, coupled with the opportunity to learn quicker through reading and writing.

What is more, they can go back online and look at their sessions after the treatment has finished. This has the effect of further consolidating learning.

Discretion is vital for bringing down the suicide rate. Men account for more than three quarters of suicides and yet they find it the hardest to seek help, because it is perceived to be “unmasculine” to admit vulnerability or ask for support.

Online therapy may not entirely remove the stigma men suffering from mental ill health face but it circumvents it.

“If we are serious about tackling suicide and mental illness, we need to try something different”

Of course, while the number of suicides represents its most devastating effect, the impact of mental ill health on society goes far deeper.

The wider challenge posed by mental illness is huge – it is estimated to cost the UK economy up to £100bn a year thanks to sickness absence, lost productivity and benefit costs. It is a problem that is simply too big to ignore any longer.

Like the rest of the NHS, IAPT services struggle to keep pace with demand, despite £400m being made available since 2011. If we are serious about tackling suicide and mental illness, we need to try something different.