How CCGs can make co-commissioning work

Most CCGs will soon be co-commissioning primary care with NHS England, leading to concerns about their expanded role. Holly Holder and Ruth Robertson discuss some ways to may the new arrangement work 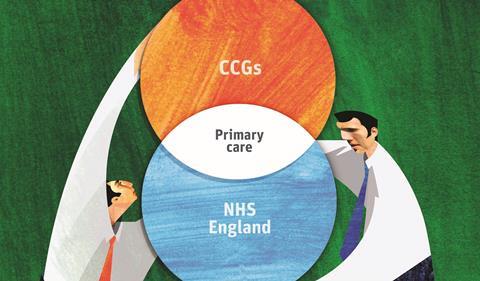 In a couple of months the majority of clinical commissioning groups will begin co-commissioning primary care with NHS England, a change that has brought much speculation about how CCGs will balance the risks and opportunities associated with this expanded role.

‘Few felt it was appropriate for CCGs to performance manage GPs’

A report by the Nuffield Trust and the King’s Fund identifies a number of reasons why, despite the progress groups have made in building clinician to clinician relationships, the sustainability of clinical involvement in CCGs is a concern.

The research was based on case studies of six CCGs including interviews, surveys, observations and document reviews.

The report found that the benefits offered by co-commissioning might be compromised by potential conflicts of interest, reductions in running costs and strained relationships with GPs and NHS England.

For example, despite increasing acceptance from GPs regarding CCGs’ role in supporting developments in primary care, few felt it was appropriate for CCGs to performance manage GPs. And while this will not be required under co-commissioning, the changes will undoubtedly necessitate a more contractual relationship.

In order to address these concerns, CCGs and NHS England will need to consider the following five points:

In one case study it was found that, during the first year of CCGs’ existence the proportion of GP leaders highly engaged in the work of their CCG declined. This was possibly linked to the finding that less than half felt they had the time, support or training necessary for their role.

Concurrently, many CCGs did not have adequate succession planning in place. The growth of leadership roles in new GP provider networks might also mean the pool of recruits is getting smaller.

It is vital that CCGs and NHS England invest in a clear primary care leadership strategy that supports current leaders and trains future ones.

The ambition of CCGs as local, clinically driven commissioning organisations will succeed or fail based on the strength of the membership voice in decision making.

We saw overall levels of engagement in a group remain constant but GP member views were, at times, limited by a complex local environment and tight deadlines set by NHS England. Joint working between CCGs and many other organisations in the local health and social care economy also added complications.

In order to maintain engagement, leaders need to be able to demonstrate the impact of members’ involvement and, throughout the changes required by co-commissioning, ensure that the relationship remains focused on peer support and is not overly contractual.

Vested interests are an inevitable part of any system that asks GPs to make funding decisions about local health services, some of which they provide.

This is not a new issue for the NHS. Many will remember headlines in the 1990s about GP fund holders spending savings on swimming pools and works. Public outrage at the idea that GPs were lining their pockets contributed to the abolition of this model.

CCGs already have processes in place to manage conflicts - interests are declared at the beginning of meetings and GPs stand down from decisions where they are conflicted.

‘CCGs will need to renew efforts to ensure transparency’

However, as some take on new responsibilities in primary care, conflicts will arise more frequently and there will be greater potential for decisions to be challenged and new initiatives stalled.

We have seen some CCGs use their local commissioning support unit to run elements of the procurement process independently; others develop the roles of lay and other non-GP members on their governing body to provide extra scrutiny.

With their new co-commissioning role, CCGs will need to renew efforts to ensure transparency in their decision making processes. The challenge will be to ensure good governance without losing the benefit of GPs’ knowledge and insight on local health services.

Be clear about the relationship with NHS England.

As it stands, CCGs have a legal duty to promote quality improvement in primary care, working with their area team. But the split of responsibilities between the two organisations plays out differently across the country.

As area teams are restructured - 27 down to 14 - and CCGs across the country take different decisions about the primary care responsibilities they want to take on, the picture will become more complex.

This change provides an opportunity to revisit the relationship between CCGs and area teams to ensure the split of responsibilities is clear and makes the most of both organisations’ strengths.

CCGs need to have adequate funding to take on new functions.

In April CCGs will be adjusting to a 10 per cent cut in their running cost budgets, from about £25 per head of population to £22.

This will come at the same time as many take on additional commissioning responsibilities.

Although CCGs have been told they can agree local arrangements for sharing staff with NHS England, there is still a risk these resources will prove inadequate; many area teams are already overstretched, and staff also work with multiple CCGs that may have taken on different levels of co-commissioning responsibilities.

To summarise, CCGs have a big year coming up: they will take on new functions with lower running cost budgets, and will be commissioning services from some providers that are often struggling to balance their finances, while maintaining levels of patient care.

As the election approaches, the whole structure of the commissioning system is up for debate again, which means uncertainty and the prospect of further change.

The focus of our work with CCGs has been on how they involve their GP members in decision making and the role they take on in primary care.

If CCGs and NHS England address the five areas we have outlined, they will - despite the uncertain environment - be well equipped to start delivering real change for patients in primary care.