2
Revealed: Eight hospital trusts with more covid patients than in the spring
Coronavirus

Revealed: Eight hospital trusts with more covid patients than in the spring

Eight hospital trusts have surpassed the level of covid-19 patients in general acute beds which they recorded in the spring peak, according to HSJ’s analysis of NHS England data.

The North West and North East and Yorkshire regions are bearing the brunt of the second wave of coronavirus and trusts there are seeing their beds fill with covid patients at a substantial rate.

Blackpool Teaching Hospitals Foundation Trust and Liverpool University Hospitals FT have the highest covid occupancy rate in England, as of NHS data up to 27 October.

But Doncaster and Bassetlaw Teaching Hospitals FT has seen the greatest increase compared with the first peak.

Doncaster already has the third-highest covid occupancy rate for an acute in England and it has seen an increase of nearly 9 percentage points from a seven-day rolling average rate of 14.7 per cent in late May to 23.5 per cent and climbing in late October.

In addition to the eight which have already surpassed their spring peak, there are 10 trusts that are nearing that point, including Wrightington, Wigan and Leigh FT which had the same proportion of beds occupied on 27 October than on 17 April in the first wave (21 per cent).

Although most of the trusts listed experienced substantial covid pressure in the first wave, they were not among those hit hardest.

In contrast, the 10 trusts furthest below their covid occupancy rates seen in the first wave are all in London, reflecting how substantial the first peak was in the capital, the much lower covid infection rates than those seen in the north in recent months, and the large bed base of some trusts in the capital.

Two London trusts have seen their covid occupancy move into double figures. Outer north east London’s Barking, Havering and Redbridge University Hospitals Trust had a fifth of its beds filled with covid patients at the peak of the first wave on 13 April. It had a little over an eighth, or 12.7 per cent, occupancy on 27 October.

Outer north central London’s North Middlesex University Hospital Trust bore a considerable burden in the first wave with nearly half its general and acute beds occupied with covid patients on 6 April. On 27 October it had 10.4 per cent of its beds occupied. 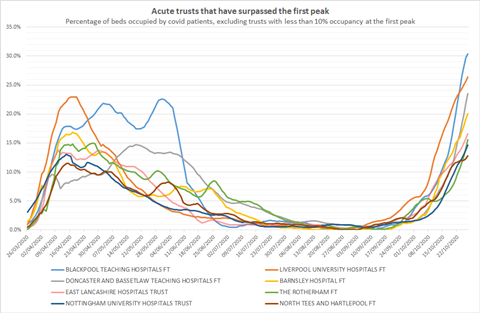 *Above chart excludes one trust whose covid occupancy in the first and second peaks has been less than 10 per cent so far. 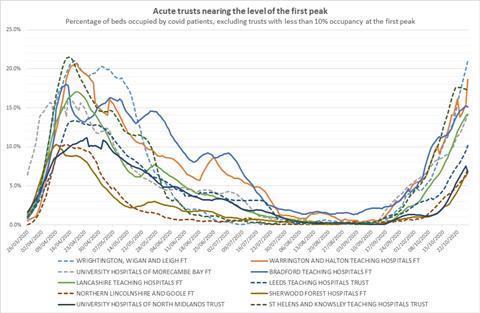 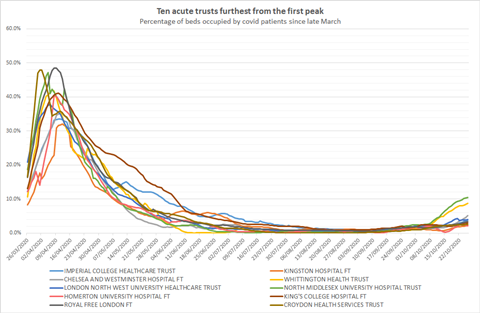 The Patient Safety Virtual Congress brings together over 1000 attendees with the shared goal of pushing the boundaries of patient safety in the UK. Hear from patient advocates on an equal platform and leave with practical ideas to take back to your organisation.