1
Fight for change: healthcare lessons from the battlefield
Delivering Change

Transformational work in army field hospitals has shown meaningful change can result from a focus on evidence-based data and the will to innovate. Daloni Carlisle reports 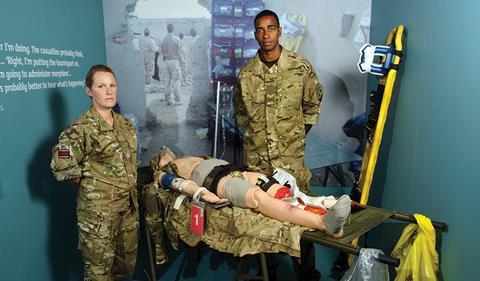 Now here’s a question. Faced with the horrific injuries inflicted on young soldiers by roadside bombs in Afghanistan, what do you do?

If you are Colonel Tim Hodgetts, medical director of NATO’s Rapid Reaction Corps and a consultant in A&E medicine at University Hospitals Birmingham Foundation Trust, you do everything – anything – you can to protect them and ensure they have the best chance of recovery.

An exhibition now running at the National Army Museum in Chelsea, London, tells the story of how army medics have dramatically improved the chances of men injured by improvised explosive devices (IEDs) – the army’s name for roadside bombs.

It documents how the army field hospital now almost routinely save the lives of combat casualties who, if they had comparable injuries and were treated in an NHS hospital, would stand a much lower chance of surviving. From 2006-09 25 per cent of seriously injured soldiers were categorised as “unexpected survivors”. In comparison, the rate of unexpected survivors in NHS hospitals was, at best, 6 per cent.

It is a story that is at once dramatic and, in a curious way, rather prosaic. Because as with all lasting change, it has involved a slog of fanatically collecting data, analysing it, adopting or creating innovation to address problems, fanatically collecting more data to see what worked, and then embedding successful changes into practice.

“It’s quite a long story, but I have analysed it in detail,” says Colonel Hodgetts, who recently completed his PhD thesis tracing the transformation over the 10 years from 1999 to 2009. “That does not mean to say that innovation stopped in 2009, innovation has continued incrementally, but in terms of step change in concepts, technology and the organisation of services, we can demonstrate the revolution in that period.”

It was during the UK’s involvement in the 1999 conflict in Kosovo when the army deployed emergency medicine as a specialty for the first time. “It might surprise readers to find that emergency services is the youngest specialty in the armed forces,” says Colonel Hodgetts. “Previously we were drawing on the inpatient specialists.”

He led that team from Frimley Park Hospital, treating victims of gunshot wounds and cluster bombs as well as road traffic accidents and began, for the first time, to collect data based on international models.

“Our assumption was that we could not provide the same level of care as the NHS,” he says. “We demonstrated that with these international models and the involvement of emergency medicine we could.”

‘Our assumption was that we could not provide the same level of care as the NHS. We demonstrated that with these international models and the involvement of emergency medicine we could’

He used a model of continuous quality improvement that he had instigated in Frimley Park, at that time an exemplar of good emergency care in the UK. It included a trauma nurse allocated to collecting data on each patient. “This was the start of trauma governance and was really important,” he says.

By 2003 and the start of the Iraq conflict, this approach of deploying specialist emergency teams and data collectors was embedded – and remains the case today. A mock-up of a field operating theatre in the exhibition shows the “scribe” – a nurse who writes down everything that happens to each patient. “It allows dynamic analysis of the way we treat our patients,” says Colonel Hodgetts.

Come 2006 and the British Army was deployed to Helmand, Afghanistan. Hodgetts took with him the lessons from Kosovo and Iraq but, faced with the catastrophic injuries inflicted by IEDs, more was needed.

“It had a profound impact on the way we train, equip and practise care all the way from point of wounding up to and including the resuscitation in the field hospital. We changed our mindset and made the catastrophic haemorrhage the most important thing.”

This was not a random shot in the dark but again based on data. “When you look back at the data from World War 2 and Vietnam, where there is a very high-quality database, it identifies that the commonest avoidable cause of death on the battlefield is external bleeding.”

‘When you look back at the data from World War 2 and Vietnam, where there is a very high-quality database, it identifies that the commonest avoidable cause of death on the battlefield is external bleeding’

It was a change that meant equipping and training the one in four “army combat medics” – soldiers with the first aid kits and skills to stanch catastrophic bleeding and maintain airways, assess the patient and relay information to the field hospital.

“It’s made us rethink how we manage the front end of the hospital,” he says.

Take right turn resuscitation as an example. “In the standard civilian hospital there is a linear approach from reception, to imaging to theatre,” says Colonel Hodgetts. The army has rethought this model and now takes the most severely injured patients straight into theatre, turning right, and bypassing resus on the left of the hospital entrance.

“This is the guy with both legs blown off and we know he is dying but he is being kept alive by the pre-hospital care and needs to go straight to theatre,” says Colonel Hodgetts. “We make that decision before the casualty arrives.” By the time the helicopter lands, the resus team and operating team are already in theatre.

The army has also changed its transfusion protocol so soldiers who have lost nearly all their blood are infused not with salt water but with blood plasma.

“It’s been taught for 20 years that the first two litres should be salt water but not our guys who have dumped nearly all their blood at the scene of the injury,” says Colonel Hodgetts.

It was a decision based on evidence emerging from the American forces in Iraq since 2007. “I am convinced that this is one of the principle reasons for our improvement in outcomes,” says Colonel Hodgetts, who intends to quantify and publish his data. His colleague, Colonel Heidi Doughty, based at the National Blood Unit, was this year awarded an OBE for her role in making this change and has been working to get the practice adopted in the NHS.

These are some of the changes in medical practice. Running alongside is organisational change. The Royal Centre for Defence Medicine, established in 2002 at University Hospitals Birmingham, provides secondary and specialist care for members of the armed forces once they have been evacuated back to the UK; it is also a clinical centre of excellence.

“We have our own floor in the new [Queen Elizabeth Hospital] complex and close relationships with the university and National Institute for Health Research,” says Colonel Hodgetts.

Headley Court, the forces’ rehabilitation centre, has become a world-leading centre in rehabilitation through its innovation, especially with prosthetics. It is now moving towards a collaboration with the NHS to create a centre for rehabilitation excellence.

This overall structure, along with the Academic Department of Military Medicine, has fed into another continuous improvement loop: weekly telephone conference calls involving all the field hospitals, policy-makers, the control centre at Brize Norton, and the department of military emergency medicine. Field hospitals on exercise listen in as do the team at Headley Court.

In place since 2007, these calls involve clinicians discussing every patient in the field hospitals so that the teams back in the UK can start planning and problem solving.

“It is an incredibly powerful tool,” says Colonel Hodgetts. “When we start to think about what we can move across to the NHS, this is a good candidate. It has empowered the clinicians. Before this there was an opportunity to go out on tour and see problems but not to do anything about them. You could go out six months later and see the same problems.

‘Before this there was an opportunity to go out on tour and see problems but not to do anything about them. You could go out six months later and see the same problems’

“The joint clinical theatre conference – and we have published this – identified that the vast majority of problems can be closed down in three weeks. You can identify with the right people who are clinically driven and centred on the patient what needs a new policy issue and what is an equipment issue, for example, and do something about it.

“There is huge momentum that is clinically driven and management is actively supporting it to develop the clinical service. Because clinicians who are deployed can all see the changes it is hugely empowering and enthusing.”

“As a doctor I do not care whether soldiers understand the physiology,” he says. “I want them to be able to recognise problems and treat them in an appropriate way with confidence and competence.”

As a result, he says, soldiers are now engaged in first aid training rather than being a secondary concern. “Their ears prick up and everyone wants to know about the tourniquets and dressings and our standards of delivery have improved.”

‘I do not care whether soldiers understand the physiology. I want them to be able to recognise problems and treat them in an appropriate way’

On a professional level, clinicians from the Birmingham team have attended every single post mortem of combat casualties since 2004, identifying patterns.

This has led not only to improved training and practice but also to some very non-clinical innovation. For example, medics noted a high number of groin injuries in soldiers killed in Afghanistan.

Within six months of spotting and verifying the trend, the “combat codpiece” had been developed, tested and introduced to provide protection where it is most needed.

“It’s based on clinical data,” says Colonel Hodgetts. “It deflects injury. I do not think we can underestimate the psychological importance to the young soldier of protecting that part of the anatomy.”

Colonel Hodgetts and his team have standardised equipment, introduced new technology, developed new clinical guidelines for operations (by which he means when the army goes out on tour rather than surgical procedures). “They are intuitive and pictorial and we update them regularly so they reflect best practice internationally,” he says.

The theme that runs through this is a culture that allows people like Colonel Hodgetts to innovate and experiment based on data and the best international evidence. It allows them to try things out, demands that they show their results and if successful quickly embeds change.

“We have also had great political will and management support to do the changes,” he adds. “The political will comes from social culture – that in wars of choice, the social stance is casualty aversion. We don’t like casualties and we don’t like deaths so anything that can reduce death and injury is going to be well received.

“But at the centre of this is the quality data to be able to provide reliable and convincing evidence on which objective decisions can be made and supported.”

Unseen Enemy is a special exhibition telling the story of Improvised Explosive Devices and their impact, focusing on the British Army’s experience in Afghanistan. It can be seen at the National Army Museum in London.