The past three months have seen a strengthening of public approval for the government’s treatment of the NHS, an exclusive HSJ/FTI Consulting poll has found.

The survey is the second in a series of quarterly polls to be conducted over the year leading up to next May’s general election. 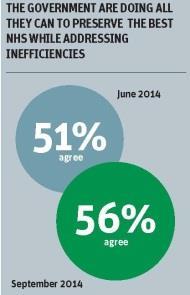 The HSJ poll found 56 per cent of people agreed the current government was “doing all they can to preserve the best of the NHS” while trying to address inefficiencies.

This was up from 51 per cent three months ago, while the proportion that strongly disagreed with the statement dropped from 25 per cent to 17 per cent.

This strengthening comes in spite of growing and widely reported financial and operational pressure on the service. 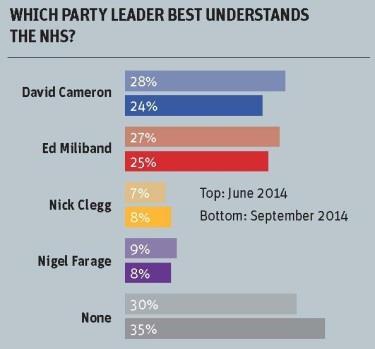 The NHS has struggled over the summer to hit emergency, cancer, and elective waiting time targets, and NHS providers’ deficits are growing.

It also comes as the Labour leadership has in recent weeks been considering making the NHS a centrepiece of its election campaign, and the possibility of committing to increased health funding growth.

The poll was carried out during September using a representative sample of over 2,000 adults from across England.

For both the prime minister and the leader of the opposition, there was a fall in the proportion of respondents who agreed that they understood the NHS. Some 35 per cent of voters thought none of the main party leaders did – up from 30 per cent in June.

Both Labour and Conservative politicians have been campaigning on issues that resonate with voters. The HSJ/FTI Consulting poll found very strong support for free parking at hospitals for staff and patients and their families. Health secretary Jeremy Hunt issued guidance last month requesting hospitals give relatives of gravely ill patients free or cheap hospital parking.

A majority believe restrictions on overseas recruitment are lowering the quality of potential employees for the service, but there was also clear concerns over “health tourism”, a consistent theme of the coalition government.

Meanwhile, many said it was more difficult to see their GP now than under the previous government. Labour leader Ed Miliband campaigned on access to primary care in May. 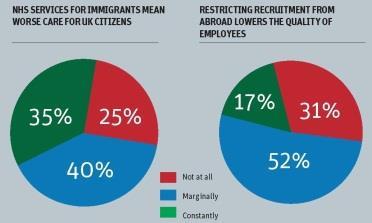 On some questions Labour has marginally extended its clear lead over the Conservatives on health since June. It made small gains on which party would provide the best NHS healthcare and on efficiency.

The survey also found there was widespread popular support for a major increase in funding for the NHS after the next election. Thirty per cent strongly agreed that NHS spending should increase above the rate of inflation, while 38 per cent slightly agreed. A third of voters wanted to see an increase of 5 per cent or more.

However, more than a third of voters said the funding increase should only arrive “once the NHS is able to demonstrate it is not wasting money”.

“Issues like car parking and health tourism are ‘nice to haves’ but the political debate will have to focus on whether we will have to give the NHS more money,” he said.

“I am encouraged that they already think the NHS needs an increase in funding… The NHS was just in balance last year and it hasn’t reached the top level of public concerns.

“If I was a betting man the chances of it becoming central to the political debate are rising sharply. The numbers are deteriorating and are continuing to all the time.”