Sarah Amani: Opportunities must be taken, not handed out

Black and minority ethnic pioneers must be brave in their resolve, create opportunities and not wait for change to happen, says Sarah Amani, the chief clinical information officer for Surrey and Borders Partnership Foundation Trust. 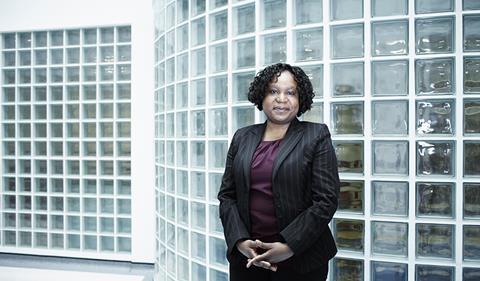 In 2005, as a newly qualified mental health nurse barely one year into her career, Sarah Amani took the courageous decision to stand up against what she saw as poor quality care. The decision in part led to the temporary closure of her ward.

Malawian by birth, it was her father’s stance on right and wrong that had prepared her for the path she was to take.

“In Malawi, up until 1992, girls weren’t allowed to wear trousers or keep long hair − you’d get arrested; from the age of three or four my dad would take me everywhere dressed up in trousers,” remembers Ms Amani.

“So he was a very good compass. He drilled into me that you have to stand by what you believe in and know the difference between right and wrong.”

It was this guiding principle that rose to the surface when she complained about the poor level of care on her ward. “Unfortunately, while some staff were wonderful, some people were quite jaded by the system for various reasons,” she recalls. “So some people were definitely not putting people’s needs first.”

During the meeting, the trust’s chief executive recalled somebody raising a concern and her team intervening to ensure there was a very wide review of the practices in that setting. “But it’s only when she mentioned it and made it sound like it was this big thing that I thought ‘oh, ok’, but it didn’t seem brave to me; I think it was actually just the right thing to do,” says Ms Amani

Steps were taken to rectify the situation and the incident has not clouded her perception of the NHS or hindered her career progression from mental health nurse to chief clinical information officer for Surrey and Borders Partnership Foundation Trust.

For Ms Amani, good leadership starts with great mentors at the beginning of your career who draw the best out of you. “I have had brilliant mentors throughout my career,” she says.

But more importantly, she believes collaboration is a major part of NHS leadership. It is, she says, “what the NHS is built on − this idea that people should not be passive recipients of whatever we deem suitable, but they actually inform the treatment that they receive”.

‘In the year the website launched, hospital admissions reduced by 75 per cent among young service users’

This ethos has been a fundamental part of her passionate advocacy for young people experiencing psychosis. Her work collaborating with young service users to build a bespoke website and app to meet their needs led to her being singled out as an emerging leader by the National Leadership Council, as well as receiving a Mary Seacole award and being shortlisted for an HSJ Award.

“Even though [the early intervention in psychosis service] was an open referral service, most people didn’t know it existed. We were sending out promotional materials like leaflets to GPs, [but] young people were telling us, ‘If I want to find something I Google it’. If you are not on Google you don’t exist [to them].”

With the development of the website, “clinicians reported that they really took pride suddenly in what they were doing”, she says, in terms of clarifying how the clinical team works and what the team was there for in addressing the mental health needs of young adults. In the year the website launched, hospital admissions reduced by 75 per cent among young service users.

Trying to fit in

It is hard to imagine the amount of energy staff from minority groups spend on trying to fit in among the majority, says Ms Amani. But opportunities are taken, not handed out, she adds.

“I had to ask for certain things; I had to sometimes say, ‘I’m not confident doing this, can you help me gain more confidence? So anybody who takes that attitude will probably get the same opportunities.”

“Instead of focusing on what needs to get done, some [BME staff] are looking to fit in. One person actually said to me I used to go around practicing a typical British accent and listening to Radio 4, trying to change who I am just to be accepted because they thought it was the only way to progress.”

There are certain things that only someone from a minority background can comprehend, she adds. “A lot of nurses and others who I speak to tell me that they just don’t have enough role models to look to or ask questions about how they can transcend this state of play,” says Ms Amani.

“Not that colour is a determining factor in relating to someone but sometimes there are things that only if you’ve lived them can you advice on. If you don’t see anybody who has lived a similar existence to yourself or from a similar background, then there’s very few people to ask about how to navigate some of those tricky issues.”