Crackdown on OAPs has desired outcome

In June last year, NHS England’s national director for mental health, Claire Murdoch, took a strong step to crack down on areas dragging down national performance on inappropriate out of area placements.

Looking at the latest inappropriate OAP data for July through to November, it appears there was a consistent monthly decline in figures. This is the first consistent decrease in “inappropriate” OAPs — defined as those caused by a lack of available beds, as opposed to, for example, being admitted after presenting at accident and emergency while away from home — since February 2018, which is welcome news. 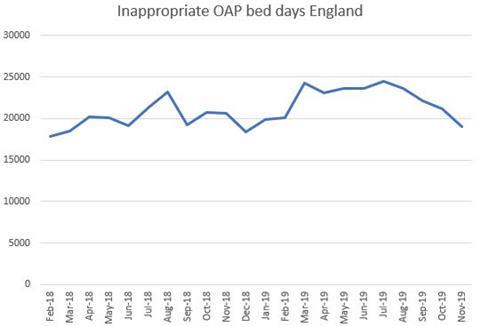 Back in June, Ms Murdoch took aim at the 10 worst performing trusts for inappropriate OAPs, stating in a letter to regional directors that the poor performance by the small number of providers was causing “considerable concern not only within NHS England and Improvement, but to ministers at the Department for Health and Social Care”.

A closer look at some of those problem trusts now, such as Devon Partnership Trust and Southern Health Foundation Trust, reveals a dramatic decrease in such placements. South London and Maudsley FT saw the biggest decrease, going from 1645 OAP days in June to 415 in November.

Was this due to NHSE’s command and control?

The process taken by NHSE will have sharpened the focus with requirements for systems to look at transformation funding, and submit recovery plans. This will have likely made it harder for clinicians to have OAPs approved by their boards.

However, the NHS is still a very long way from eliminating inappropriate OAPs by the government target of 2021, so I wouldn’t pop the champagne just yet.

While an increase in national beds is by no means a solution to OAPs, it does form part of the picture.

HSJ is hearing the prospects of capital being handed down in next week’s Budget are slim. If this is true, the capital the sector has been calling for will have to wait until the spending review, leaving little chance of a significant increase in NHS-owned acute mental health beds over 2020-21.

Even if the sector is handed some capital next week, it is more likely to go towards the improvement of inpatient units, such as eliminating dormitory wards, rather than to increasing the bed base. I would argue this is probably the most appropriate use of the money.

In other news… with the NHS preparing for Covid-19, I’m keen to hear from mental health trusts about their plans, as they will often be in a very different situation to acute trusts.

If a trust had an outbreak of the virus on one of its acute or PICU wards, would it be appropriate to isolate a patient who has, for example, schizophrenia in their room for two weeks?

Mental Health Matters is written by HSJ’s mental health correspondent Rebecca Thomas. Tell her what you think, or suggest issues she could cover, by emailing her in confidence at rebecca.thomas@wilmingtonhealthcare.com or by sending a direct message on Twitter.