Barriers to a paperless NHS: Are you ready for your screen test? 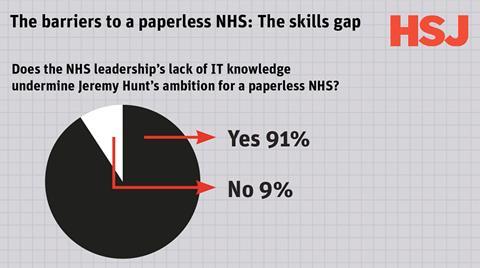 The barriers to a paperless NHS: The skills gap

The barriers to a paperless NHS: The skills gap

Today, HSJ publishes an open letter to the health secretary, detailing what those working both inside and outside the NHS feel are the barriers to realising his ambition for a paperless NHS.

We have received no shortage of answers. Some 430 people have now responded to our survey on the topic - run in association with BoardPad - which has been open since late last year.

The message to Jeremy Hunt is loud and clear: many working in the NHS and private sectors - including those within the technology industry - have serious concerns about whether his target for it to be paperless by 2018 is a realistic one.

One of the most pressing worries is the lack of knowledge of IT issues among the NHS leadership community. An overwhelming 91 per cent of those who answered our survey felt that ignorance of IT at the top levels of the service will undermine the paperless ambition.

It is in this area, that of knowledge and culture, that HSJ is today calling on Mr Hunt to take action.

We have asked him to address a situation in which technology is often seen as separate from - rather than integral to - the delivery of efficient, high quality patient care.

Our survey suggests any such plan may need to involve increased promotion of existing efforts to increase understanding of healthcare technology.

In November, NHS England launched its clinical digital maturity index, an attempt to help trusts comprehend how well developed their clinical IT is.

Only half of those who responded to our survey said they were familiar with the term, however, and another 34 per cent said that while they had heard it they were not certain they fully understood it.

While a significant majority of those who responded to our survey identified culture and knowledge as an important barrier, it was far from the only concern. Almost 71 per cent cited the lack of joined up working between different parts of the NHS as a problem. A significant minority felt legal requirements and worries about information governance would prevent the NHS realising the paperless ambition.

This point seems all the more notable given the well publicised recent difficulties over care.data, and the debate as to whether it should be based on an opt-in rather than opt-out principle.

Our respondents had money concerns, too. Close to half believed funding to buy new systems, or a lack thereof, would prove a major barrier to becoming paperless. And if funding were available, and software purchased, over half of respondents told us the lack of interoperability between such systems would be a problem.

Linked to both these points was scepticism from many about the benefits of huge, multinational organisations being involved in the NHS’s journey to paperless. Asked to name the biggest barriers to Jeremy Hunt’s 2018 goal, one manager in an acute trust replied: “Profit-driven greed.” “Private providers have to be more open and set realistic profit margins,” agreed a senior manager from a special health authority.

It was a point echoed by a doctor who answered our question on the biggest problems in purchasing IT solutions: “Existing providers using anticompetitive tactics,” was the response. “Everyone wants the cheapest option or gets taken in by wildly inflated product specs by the sellers,” argued a senior manager in the private sector.

“Some of the systems I’ve seen installed never do what was promised, and the NHS picks up the tab to put it right.”

An ICT project manager working in the private sector expanded on the point by making reference to HL7, the international organisation which has worked on interoperability standards for health IT since 2000.

“HL7 provides an interface mechanism for all systems to speak to each other,” the manager explained. “However, companies seem to be able to demand ridiculous sums of money to provide simple HL7 interfaces. This has to be in part due to the lack of alternative options for trusts as they do not have the funds or the ICT resources to switch vendors.”

Another manager in the private sector argued contracts should be denied to any companies “which use private tags in so-called international standards such as HL7.”

He had a further suggestion to make interoperability and vendor switching easier: “Tie in private sector providers at the front end of a contract to future data transfer costs.”

In the context of such responses, one of the most striking statistics from our survey becomes more easily understandable. An arguably surprising 72 per cent said they supported NHS England’s call for more open source technology to be used by NHS providers. Just 8 per cent said they did not support these efforts; the remaining 21 per cent were unsure.

Staff at NHS England have increasingly encouraged NHS providers to examine open source software, which is collaboratively created and involves making source code available to the general public to use and modify free of charge. In an article published in HSJ in October, Beverly Bryant expounded on the benefits of such an approach.

“It can provide a range of benefits to the NHS that are not usually achievable by purchasing commercial off the shelf software,” argued NHS England’s director of strategic systems and technology.

Many of those who responded to our survey agreed. “Set open source as the norm so no single provider is dominant,” suggested one, a former executive director at a mental health and community provider. “Make it [paperless] a not for profit reality,” argued a manager at an acute provider.

Our respondents saw several potential benefits of using open source. Some 80 per cent argued it would allow trusts to share innovation across the rest of the NHS.

Almost 67 per cent saw it as helping organisations to avoid “vendor lock-in”, with just over half suggesting it would drive up the quality of the offer from proprietary vendors.

There remained some doubters among our sample, but it is fair to say they were in the minority. Less than a quarter of those surveyed opted to name what they felt were the risks of open source technology.

And while some questioned the virtue of the paperless itself - “clinically I do not see the need for it,” said one allied health professional working in a community trust - these were in an even more significant minority of respondents.

After all, just 5 per cent said they did not feel the goal to become paperless was relevant to meeting the targets of their organisation.

The priority, then, is to address the barriers - not least lack of knowledge. “It is vital that senior managers, including board level, have the skills and understanding to enable them to work with vendors and act as ‘intelligent customers’.

Over to you, Mr Hunt.

Suggestions on how to overcome the barriers

“People have to start believing that a paperless NHS is achievable! It is, but clinicians of all disciplines need to embrace the changes that will result, rather than hide behind their much-loved paper. Private sector stakeholders (and IT in general) need to start speaking and writing in plain English so that people, including the general public, can understand what a paperless NHS could offer them.” - Nurse in private sector

“Listen to senior clinicians, remove over-complex IT governance; relax and just do it.” - Doctor

“I would rather we all embrace the idea rather than being bogged down in pessimism about phantom barriers.” - Independent mental health advocate

“First, don’t make the project too big. Look what happened to NPfIT. Make the programme [too] big [and] it won’t work; prove it on a smaller scale and work up. Second, don’t allow providers to grab control by virtue of their refusal to collaborate with others. Third, open source should be mandated and anyone who won’t play should be excluded. No exceptions.” - Executive board director, consultancy

“Collaborate more. Don’t try to reinvent the wheel. Set up a reference library of experience that people can draw from and take elements they like that they can apply locally. They then make their own contribution to the library when they finish.” - Executive board director at a software vendor

“Mandate it. Provide human and finance resource. Believe it is possible - which I think it is.” - Responsible officer

“Fewer negative comments in the press. The whole idea of paperless is great. Look at how people were against ebooks, and now everyone loves a Kindle.” - Information manager working in education