Pathology plays a significant part in almost all patient pathways. But how can healthcare organisations get the greatest benefit from it? Alison Moore reports

An HSJ survey, in association with Roche, looked at what managers and clinicians think about pathology services and how they could be improved. More than 500 people, from both providers and commissioners, took part in the online survey.

Accuracy of results was top, followed by timeliness and then advice on interpreting abnormal or clinically significant results. 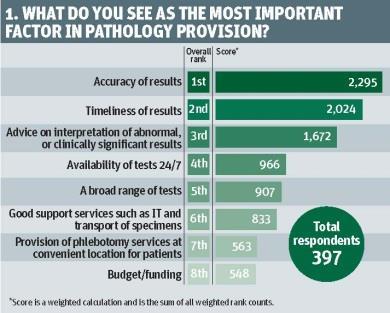 But when asked which factor would have the most impact if improved in their own organisation, respondents chose timeliness, followed by support services (such as IT and transport for specimens) and tests being available 24/7. 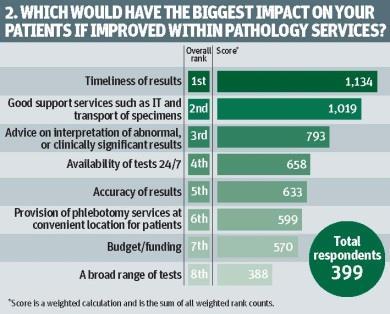 In both cases budgets and funding ranked relatively low.

The comments also suggested there were problems. Several respondents reported that the system under which they worked was not patient-centric. One said it needed to be more local, thereby “reducing inconvenience for patients in an outpatient setting”. Another said patients could face up to three hours waiting for blood to be taken, and so often gave up and went home.

‘The value of pathology lies primarily in using the results, not in producing a result’

Difficulties with IT were also highlighted, including fragmented, unconnected systems that can delay the reporting of tests. It was also noted that this was true of transport to the laboratory and the difficulties caused when it was not timely were noted.

A rush of late afternoon arrivals leads to GP samples not being touched until the next day. And with GPs under pressure to provide seven day surgeries, one respondent pointed out the need this would create for seven day transport and processing for samples.

That more advice and interpretation was desired came out strongly in the comments, and there were concerns that in future there might not be enough staff to give advice. One person highlighted virology results which, they said, could not be interpreted by a computer and needed individual analysis.

Another pointed out that, when results were abnormal, junior doctors simply asked for more tests, which could waste money and time, and delay patient treatment.

One summed it up: “The value of pathology lies primarily in using the results, not in producing a result.” However timely and accurate a test result is, it means nothing if it does not influence treatment.

“Some tests have true medical value but there are others that will have limited impact in particular cases. Does pathology have a role in saying to clinicians: ‘As a result of whatever this test shows, are you going to change the treatment for the patient involved?’” asked Pierre Hazelwood, director of point of care at Roche. “We often hear that there are a lot of unnecessary tests but [people in the NHS] also feel they can’t get the funding for new tests.”

A separate question showed that one in five felt their organisation never made use of pathologists’ expertise to avoid unnecessary tests.

When asked about barriers to adoption of new tests, respondents flagged up budgets - despite being seen as fairly unimportant in the other questions. 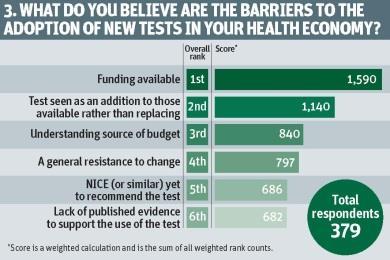 Funding was seen as the biggest barrier, followed by new tests being seen as an addition to - rather than a replacement of - existing tests and understanding the source of the budget.

If decisions around adopting new tests are sometimes contentious, who makes them? Perhaps encouragingly, three out of four respondents felt they were a joint decision that involved two or more groups, such as managers and clinicians.

However, there was scepticism about whether organisations always looked at the impact of investment decisions in pathology on the whole patient pathway. Only an eighth overall felt this was always considered - just a little more than the number of those who felt that it was never considered.

‘Pathology is a clinical service, not an ancillary one’

Among those responsible for pathology budgets, the percentage was higher - around one in five said impact on the patient pathway was always considered, against one in 10 who said they were not responsible for a budget. However, just over half were aware of cases in which a new test had led to improvements in patient outcomes and nearly 40 per cent knew of cases where the introduction of new tests had led to a reduction in patient care costs.

Budget holders were more likely to be aware of improvements in patient outcomes - more than three in five knew of this, against just under half for non-budget holders.

In addition, they were twice as likely to be aware of cases when new tests had reduced overall costs of care (62 per cent against 31 per cent for non-budget holders).

When asked whether they knew of cases in which the introduction of new tests had led to benefits, there was a rush of examples, many of which would have reduced costs and improved patient outcomes and experience. In one case the adoption of new tests had allowed a hospital to develop a gastroenterology service. However, some respondents pointed out it was rare to collect the data that demonstrated the positive outcomes of new tests.

Some pathology tests have frequently led to improved patient outcomes, including:

Mr Hazelwood said: “There seems to be a huge opportunity for pathology to be seen as a more central part of clinical services. Delays in interpretation can slow patient treatment and yet, together we all want to reduce patient anxiety and provide better care.”

He added that involving pathology with clinical services could lead to positive outcomes - not least, the reduction of unnecessary tests, which would bring financial savings. “There is a clear need within the clinical team for more support in interpreting these tests. They really need to understand with new tests where they could be adopted, but also what are the positive outcomes. This is the opportunity for pathology.” Some of these benefits could be some way away from where the money is spent.

“You often have people operating with these tiny budgets without a holistic look at where they spend that budget,” he said. “But where we have already started to help is by showing the savings and efficiencies that can be gained by using these tests.”

Mr Hazelwood’s colleague, Paul Skingley, director of hospital in vitro diagnostics, pointed out there are great examples of good practice within the NHS where whole-system savings are considered. “What makes the difference is the partnerships, driven by local clinical and technical leadership - people simply having these important conversations together.”

The issue was often that it was not the default position to consider the whole-system impact. Another issue was how to weigh up local availability against the benefits of centralisation. While a central laboratory can offer opportunities for excellence and economies of scale, it can also involve more time getting specimens to test and can make pathologists more distant from clinical teams.

Mr Skingley points out there are pros and cons. Centralising some specialist pathology services has enabled access to excellent interpretation. At the same time, patients may be treated closer to home. But how can tests then be taken, and results obtained and passed to clinicians, in the same time scale? As one respondent points out, patients can wait up to two weeks for a blood test at their GP’s surgery.

But the survey shows pathology is less about tests, and more about guiding and aiding clinical decisions - both to order the test in the first place and once the results are known. As one respondent summed it up: “Pathology is a clinical service, not an ancillary one.”