Problems with a major vaccination IT system across England are occurring because the NHS greatly under-estimated the amount of data which would need to be processed, HSJ can reveal.

The blunder means the company which runs Pinnacle – the IT software used at all vaccination centres apart from NHS hospitals – is “scrabbling” to increase the system’s capacity to keep up with the increasing numbers of jabs happening, according to sources.

More than 30 new mass vaccination centres are opening this week.

Last Friday, Pinnacle – which is run by health technology firm Emis – crashed in parts of England for several hours due to “exceptional demand”, forcing staff at some centres to record vaccination details with pen and paper.

It was the latest incident in several reported outages suffered by Pinnacle since GP-led and community vaccinations sites went live in December.

However, HSJ understands that the problems have occurred because the system was not initially contracted to deal with the data volumes it is currently processing.

One senior source said: “When NHS England/Improvement put contracts in place with Emis, they specified a load requirement which was much lower than the volumes of vaccinations now being processed through the system.

“This was also much lower than what is required to support the new vaccination centres that [are still in the process of opening].”

The disruption caused by Pinnacle’s problems has forced NHSE/I’s primary care vaccination team to make funding available to vaccination sites for extra staff which can be hired to help record the jabs.

The temporary measure has been put in place while the NHS and Emis try to scale up Pinnacle’s capacity, according to a memo sent to vaccination sites.

The source told HSJ: “Emis are scrabbling to catch up with a level of usage that they were not asked to provide for, until very recently.

“Various changes are going in over the coming weeks to create much more capacity so that the system performs much better.”

A spokeswoman for EMIS told HSJ it had increased Pinnacle’s system capacity “significantly” throughout January, and added: “Further increases are being introduced on a rolling basis to meet demand as the programme expands, while maintaining high performance standards.”

She said Pinnacle was the first IT system commissioned by NHS England/Improvement to support the “unprecedented” covid-19 vaccination programme, which “began from a standing start and is scaling at pace”.

The overall responsibility for digital services, including data, to support vaccination sites is held by NHS Digital.

A memo (see below this story) to vaccination sites on Friday said NHSD is working “around the clock” with Emis and the primary care covid-19 vaccination team to scale up capacity.

NHSE/I did not respond to HSJ’s questions, but said in a statement: ”Pinnacle is a longstanding and tried and tested vaccination system, and as EMIS who provide Pinnacle have rightly said, they have been working closely with NHS Digital on a rolling basis to meet demand as vaccination expands.”

The regulator had originally planned to use two IT solutions across England – Sonar in London and Pinnacle elsewhere. Both were mainly used in pharmacies and to record details in the annual flu vaccination programme.

But HSJ understands Sonar, run by Sonar Health, pulled out shortly before vaccine deployment began, due to price issues.

This meant Pinnacle already had to absorb 20 per cent extra vaccination data than first planned. 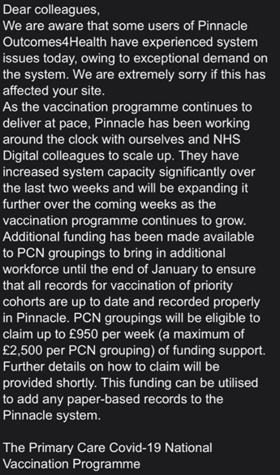 The memo received by vaccination sites on 22nd Jan about Pinnacle’s problems.