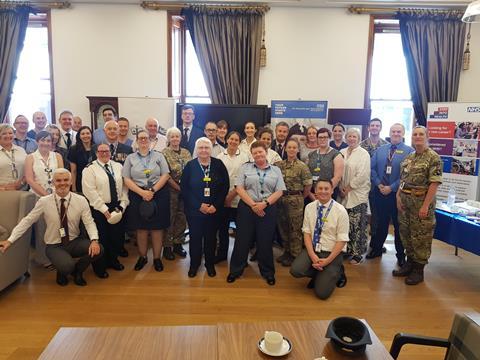 Serving a region with a strong military history and close proximity to the 201 Field Hospital, The Newcastle Upon Tyne Hospitals Foundation Trust has a particular focus on the needs of veterans and reservists.

The trust employs around 40 active reservists, a similar number of veterans, as well as around five cadet force volunteers. It has a supportive mobilisation policy and reservists are entitled to 10 days additional leave so that they can attend annual camp.

Its approach has won it several prestigious accolades including the Ministry of Defence’s Employer Recognition Scheme gold awards – the highest badge of honour for those who employ and support members of the armed forces, veterans and their families. The trust has also been honoured locally for its work. Last year, it also won the Reservist Support Initiative category in the HSJ awards, giving it an opportunity to share its work with a wider audience.

The organisation wants to encourage people with armed forces backgrounds – whether reservists or veterans – to become part of its workforce, in part because it recognises the transferable skills they bring, including leadership capabilities and experience, and planning expertise. Steps to make jobs attractive and accessible include a guaranteed job interview scheme for reservists who meet the minimum criteria; the removal of the necessity to have NHS experience as an “essential” part of job requirements; and a dedicated page on its careers website.

Importantly, the trust also puts people with forces experience at the heart of the organisation’s wider decision-making process. Recently, after consultation with reservists and veterans, the organisation formed an armed forces staff network to ensure that they had a strong voice and a means of making it heard. The forces-friendly agenda is also backed from the top, with sponsors including the medical director, a non-executive director of the trust board, and an HR lead.

Its well-embedded mobilisation policy ensures that managers and staff understand what is needed before, during and after deployment

“The network allows them to contribute to the future of our ‘Forces Friendly’ culture and shape how we continue to benefit reservists,” a spokesperson says. “Each year on reservists day, we hold an executive lunch where our board thank our reservists for their contribution and commitment.”

The trust has also signed up to the Veterans Hospital Covenant Alliance – another means of pledging its support and the priority it gives this area.

Becoming known as an organisation that supports the armed forces has benefited the trust reputationally and operationally. “Our patients are able to see that we recognise and value the contribution the armed forces play in our community and our part in that as an NHS organisation,” the spokesperson adds. “We are able to work closely with the local field hospitals and military units to fill skill gaps in specific specialties. As part of this we also offer honorary contracts to those in the regular forces to maintain and develop their clinical skills and likewise, we benefit greatly from the transferable skills and expertise those in the reserve forces bring into the organisation, specifically in relation to emergency care, leadership, planning and strategy. One of the trust’s reservists, Rachel Hawes, was awarded an OBE in June 2018 for her work in bringing lessons learned from the military back to the NHS.”

The trust has developed strong links with armed forces charities including Forward Assist and the Royal British Legion Industries. Since 2016, it has supported RBLI by running mock interviews for veterans through its LifeWorks programme.

The support is two-way: the trust’s leadership programme – open to all senior NHS leaders in the North East – includes a two-day session on learning from the forces, which gives participants the opportunity to learn skills from the British Army, including communication, planning, crisis management and resilience.

The trust also shares its work in this area more widely, including through the NHS Employers AF network. It is also an active member of the Newcastle Armed Forces Forum, which is hosted by the city council and brings together units, employers and businesses to ensure that the armed forces community is supported.