I'm a male feminist: Why I fight for equality

You don’t have to be a woman to fight for equality of pay, opportunity and a fair society, writes Chris Lake. He explains why he wears his self-imposed feminist label with pride

Years ago, I used to be somewhat gender blind, holding a naïve belief that if I said often enough, “gender is irrelevant, let’s just be a meritocracy”, then I could make it so – at least in my team. It’s when I realised that, whether I liked it or not, I was a fully paid up (if reluctant and unwilling) member of the patriarchy simply by dint of being a man, that I saw the world through new eyes.

These eyes saw a society constructed for centuries in favour of men. I saw, too, an unequal society that perpetuates today where men hold the balance of power and predominate in roles of leadership, authority and privilege.

Nowadays, I frequently refer to myself as a radical feminist (as opposed to a liberal feminist because I don’t just seek equal opportunity but push for a more challenging stance to dismantle male supremacy). As a badge for this, my email footer always carries a feminist quote – a few recent examples are included below.

This self-imposed feminist label sometimes confuses people. Not too long ago, a colleague – a decent and well meaning man – challenged me on my use of this term, saying: “Chris, you can’t be a feminist, you’re a man!”

‘One doesn’t have to be a woman to fight for equality of pay, opportunity and a fair society’

My retort was that one doesn’t have to be black to support race equality, nor gay to promote workplaces where people can be their true selves.

One doesn’t have to be a woman to fight for equality of pay, opportunity and a fair society.

I think it was this reputation as a male feminist that led to me being asked to speak at the launch of the HSJ Women Leaders network.

Why did they ask me – someone who, on the face of it, is clearly a member of the established power holders (white, male, heterosexual, you get the picture…)?

I think it was because the topic for the network launch was “Should the HSJ Women Leaders network admit men?”

My personally conflicted response was: “It depends.”

If the aim of the network is to provide a safe and bounded space for women to have conversations that simply would not happen if men were present, then I’d be a huge supporter, but a supporter from outside, and say: “Leave men out!”

However, if the network has grander aspirations to stimulate and provoke a political movement, to change our organisational cultures, the NHS, society, and indeed to change the very nature, practice and definition of leadership, then maybe the answer is yes. And I’d urge my male colleagues to join and support the movement too.

“A man told me that for a woman, I was very opinionated. I said, ‘For a man, you’re kind of ignorant’” - Anne Hathaway, actress, human rights campaigner, LGBT rights activist, Step Up Women’s Network

“Feminism has fought no wars. It has killed no opponents. It has set up no concentration camps, starved no enemies, practiced no cruelties. Its battles have been for education, for the vote, for better working conditions, for safety on the streets, for child care, for social welfare, for rape crisis centres, women’s refuges, reforms in the law. If someone says, ‘Oh, I’m not a feminist,’ I ask, ‘Why, what’s your problem?’” - Dale Spender, Australian feminist scholar, teacher, writer and consultant

Glass ceiling is cracked, but not shattered

I used to work with Val Hammond, whose research underpinned the Opportunity 2000: A Culture Change Approach to Equal Opportunity report, which coined the phrase “glass ceiling”. The report, published in 1992, planned for a new millennium with a rebalanced workforce and updated organisational cultures. Its aim was the equal employment of women, especially in senior management, in a way that reflects their abilities.

‘A masculine style tilts leadership away from the inclusive, empowering practice’

Fifteen years after the target date for board gender equality, we are still not there. We may have had a woman prime minister, but arguably Margaret Thatcher, as parodied by Spitting Image, demonstrated the macho and heroic approach associated with stereotypical male bosses.

This masculine style tilts leadership away from the inclusive, empowering practice that we know promotes staff engagement. It limits organisational performance and, importantly in the NHS, represents a real risk to patient care.

Cast your eyes over the figures below – at least in the NHS, the glass ceiling may be cracked, but it’s definitely not yet shattered. 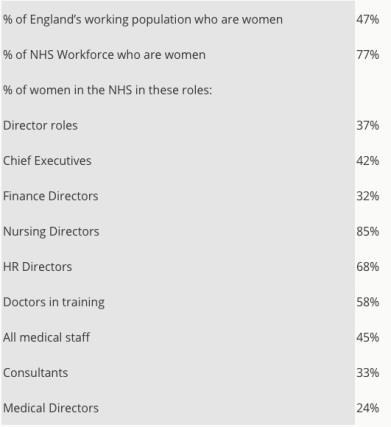 Right at the top of the NHS tree, the situation is even more stark. Both the chairs and chief executives of NHS England, Monitor, the NHS Trust Development Authority, Public Health England, Health Education England and the National Institute for Health and Care Excellence – all men.

Even the six-strong team of health ministers holds five men and a solitary woman.

This month sees the 150th anniversary of Elizabeth Garrett Anderson becoming a Licentiate of the Worshipful Society of Apothecaries, and in so doing, becoming the first woman to qualify in the UK as a doctor. I wonder what Elizabeth would have thought about the stats above and the need for a women’s network.

‘Do you want to be more like the WI or the Suffragists?’

History has a couple more examples of women’s groups that might serve as a model for us now. One-hundred years ago this month, women had the opportunity to join a brand new organisation – an organisation that’s still going strong today: the Women’s Institute.

The WI has always been for women only – it’s a bounded space for women to meet beyond the influence and interference of men. Also 100 years ago, women (and indeed men) could join the women’s suffrage movement, and fight for equality and the democratic right to vote.

My challenge to the HSJ Women Leaders network is simple – which do you want to be more like: the WI or the Suffragists? If it’s the latter, then I’m up for joining.