The number of hospitals falling short of their planned nurse staffing by 10 per cent or more has almost tripled in five years, HSJ has learned.

An analysis of unpublished workforce data by HSJ reveals the gap between the number of nurses hospitals think they need, and what they are able to staff it with, has grown since 2014.

The number of hospital trusts reporting a shortfall of 10 per cent or more on their day shifts increased from 20 in June 2014 to 55 in June 2019 – nearly triple.

The data shows a small improvement over the year to June 2019, the reason for which is unclear.

Meanwhile, in every single month from 2014 to June 2019, a majority of hospitals fell short of their planned nurse staffing number.

Experts said the data showed the NHS was “drifting into massive skill mix change” as hospitals overstaff with support workers, while having to run shortfalls of nurses, despite evidence this has a “detrimental impact on patient outcomes including survival”. 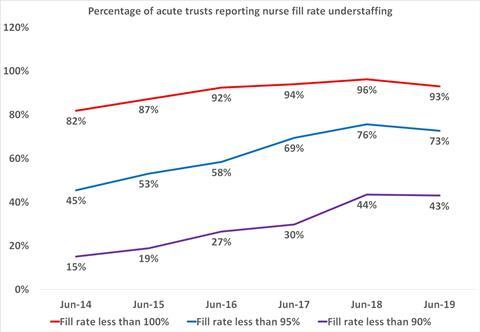 In 2013 the Francis report, following the public inquiry into the Mid Staffordshire care scandal, recommended greater transparency over nurse safe staffing levels which led to the regular publication of trust by trust nurse staffing data.

This has now been stopped by NHS England and replaced with a “care hours per patient day” metric which has been dismissed as “fundamentally flawed” by nurse staffing experts, and mixes together nurses and care staff.

However, HSJ obtained the data via a Freedom of Information request to NHS England.

Health Foundation senior economist Ben Gershlick told HSJ the Francis report had generated a better understanding of the need for more nurses, but that policy decisions since the public inquiry had led to those key messages being “slowly, slowly forgotten”.

He warned: “We have seen a hollowing out of the [nursing] workforce with more doctors and more support staff but because we haven’t increased nurses we have drifted into this massive skill mix change without thinking what it means on the ground.

“If we don’t do something soon it is only going to get worse. We need to do something quite big quite soon to get ahead of the problem.” 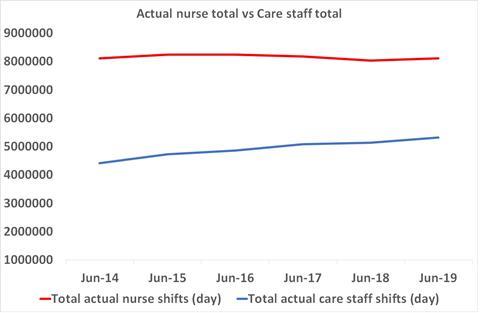 Other findings from HSJ’s analysis – all of which related to analysis of day shifts – include:

Using the planned versus actual numbers of nurses needed across England, the data shows on average at least 47 medical specialties were below their planned nurse staffing levels during the day each month.

In total, 25 specialties were short of nurses for each of the 61 months analysed by HSJ. This included acute medicine, cardiology, critical care, general medicine, and neonatology.

The worst affected specialities – with less than 90 per cent of planned nurse staffing levels each month – were clinical pharmacology, spinal injuries, paediatric surgery, neurosurgery and neurology.

Alison Leary, professor of healthcare and workforce modelling at London’s Southbank University, told HSJ: “It’s concerning but understandable that trusts are filling that gap with unregistered support staff because we know from the evidence that skill dilution has a detrimental impact on patient outcomes including survival.

“Six years after the Francis report we are going back to what he discovered with a focus on financial performance over safety and workforce. It is very concerning this data has been taken out of the public domain. It needs to be subjected to scrutiny and we shouldn’t have to rely on journalists and FOI legislation.”

Professor Leary said NHS trusts needed to do more on retaining nurses and recognising their value.

North Tees and Hartlepool Foundation Trust reported fewer than 90 per cent of nurses in each month since 2014, while the Princess Alexandra Hospital reported less than 80 per cent for 34 months – or more than half of the five year period looked at by HSJ.

A spokesman for North Tees said safety was a priority and the trust had been rated good by the Care Quality Commission. They added: “Over the past 18 months, the trust has been particularly successful in recruiting into vacant posts and maintaining a low vacancy rate. Gaps in fill rates are due to a number of factors including staff sickness absence and not purely related to vacancies.”

NHS England did not answer questions about why this data was no longer being published. A spokeswoman said: “There are over 9,000 more nurses working in the NHS than five years ago, and the ratio of nurses to hospital beds has improved, but there needs to be a further large increase in the nursing workforce over the next five years, which will be set out in the forthcoming NHS People Plan.”

A Department of Health and Social Care spokesman said: “The safety of patients is paramount and all hospitals are required by law to have the right staff in the right place at the right time.

“There are 17,000 more nurses on our wards compared to 2010 and we’re taking action to recruit and retain more dedicated staff.”