In current times, how can the NHS best support honesty when things go wrong?

Pandemic and backlog pressures may make candour more challenging but do not make it any less essential, the panel at a recent HSJ webinar argued. Claire Read reports 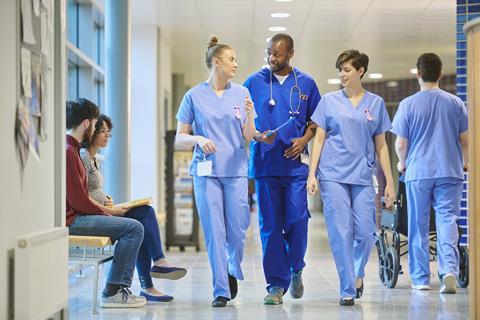 When Helené Donnelly reflects on whether the pandemic has impacted on NHS staff’s ability to speak up when things go wrong, she says there had been reason for optimism.

“Thus far we’ve actually seen an increase in some of the numbers of people coming forward, certainly to freedom to speak up guardians,” Ms Donnelly, ambassador for cultural change at Midlands Partnership Foundation Trust.

But as she reviews the current landscape, 18 months into a pandemic, a difficult summer behind and a very concerning winter ahead, she sees reason for concern – and an uncomfortable reminder of the failings she saw when she was a nurse at Mid Staffordshire FT.

“I think we’re at a tipping point now. We’re at a point in time when burnout is really high, there are huge issues around capacity and retention.

“And the message from the centre is: ‘Just get the job done and get it done quickly.’ That is a dangerous position to be in because it will silence people. That was essentially the climate we had at Mid Staffs which led people to either cut corners and lie about it, or just stop caring in the way that we should, and we should never lose sight of that.”

Ms Donnelly – who raised concerns while at Mid Staffordshire and ultimately went on to give evidence at both inquiries into what is deemed the biggest care failing in NHS history – was speaking at a recent HSJ webinar. Run in association with RLDatix, it brought together an expert panel to consider how the NHS can best support honesty in a time of extreme pressure.

Concerns that 18 months of the pandemic had led to a ‘just get it done’ culture, and one in which compromises are having to be made, were a central theme of the event.

“What I hear, and particularly since the pandemic, is the health system has become more transactional,” said Alison Leary, professor of healthcare and workforce modelling at London South Bank University.

“The things that drove Mid Staffs – financial performance, particularly, and efficiency; the underpinning transactional nature – have resurfaced. It’s all about doing more with less, and doing more with less skilled people. The reasons are different now, but the situation seems to be recreating itself.”

She said the result was a workforce having to make “big compromises on care, and compromises that it is not comfortable with”. “There are a number of studies going on at the moment, looking at things like the moral distress this is causing in the workforce. And there are also people exploring the incidence of PTSD [post-traumatic stress disorder] in the workforce. So, all of this is like a perfect storm. Not enough people, too much work, a workforce that feels morally distressed and exhausted.”

Not an optional add-on

Under that sort of pressure, something’s got to give. But for Peter Walsh, chief executive of AvMA (Action Against Medical Accidents), that something cannot be candour.

“Honesty and openness when things go wrong isn’t an additional, optional add-on. I would argue it’s a fundamental part of professionalism,” he said. “The vast majority of health professionals would see it as who they are and what their professional status stands for. So it’s not something that can be jettisoned or diluted when things get tough. In fact, it’s even more important when things get tough that we stand up for fundamental principles that are all part of that culture that leads to a safer environment and a safer organisation.”

What can be cut, he suggested, is the red tape sometimes involved. “A lot of people still treat the duty of candour as some kind of tick box exercise. People shouldn’t be fearful of being caught out – I know the CQC wouldn’t be seeking to catch people out for having a discussion a little later than might be expected where people have good reasons.

“The important thing is that the discussion takes place between the treating health professionals or people representing them and the patient or their family.”

So how can leaders create the sort of environment in which the spirit of honesty is always supported? Part of it, said Ms Donnelly, is showing gratitude when issues are raised.

“It’s about thanking people when they do speak up and something has gone wrong and seeing it genuinely as a gift. It inevitably will create some work and create some problems, but seeing it as a gift from which to learn and improve is what it’s all about.”

Also important, said Ms Donnelly – who serves as her organisation’s freedom to speak up guardian – is ensuring those who do report concerns are updated on what has been done in response.

This was a point on which Tim McDonald was in complete agreement. “People don’t report for fear of retaliation, but they also don’t report because of apathy, which is: ‘Why should I report when I never hear back from [you on] what you’ve done?’”

The chief patient safety and risk officer at RLDatix said this feedback issue was something that could be addressed by incident reporting systems. But, more broadly, he said “we have to stop punishing people for being human”.

“We’re all human, we’re all going to make mistakes. We have to stop punishing people for that, recognising mistakes will happen, and we can’t improve if we don’t learn about them. We have to do it in the context of just culture, which is one that is fair but also holds people accountable.”

That accountability was especially important, he said, in the context of leaders who try to prevent concerns being raised. Ms Donnelly, for instance, was confronted by bullying and threats when she tried to speak up.

“You needed to be celebrated instead of bullied,” Dr McDonald said. “The people who bullied you are those who need to be held accountable, because that is volitional, intentional. That isn’t a mistake. We have to find ways to hold people accountable that behave recklessly, versus those at the frontline who make mistakes.”

This sort of just culture, he said, is one which is “open, honest, empathic and compassionate”. In that way, it is beneficial both for patients and for healthcare professionals – enabling them to feel supported in immensely difficult circumstances.

“This isn’t about ticking the box,” said Dr McDonald. “This is about loving our patients and families, loving our caregivers in this time, and if we’re able to do this, I think we can get through the pandemic.”

An on demand version of this webinar is available. If you had already registered for the event, click here to access the recording.

For those who have yet to register, click here and scroll to the foot of the page to complete the form. Details of how to access the on demand recording will then be sent to you via email.