An HSJ analysis of agency spending reveals what trusts have spent on staff. Ben Clover reports 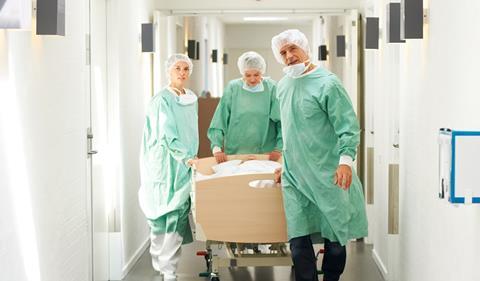 Spending on agency staff will be the biggest issue in the hospital sector over the coming 12 months. It is the locus of financial, activity, safety and staffing pressures.

With the provider deficit potentially breaching the Department of Health’s expenditure limit, containing agency staffing costs would be a major coup for the service.

This analysis of data collected by HSJ is the first to provide detailed information at trust level on what was spent, where, and the accompanying picture on nursing staffing.

Assessed by headcount, the number of substantive nurses working in the English non-specialist hospital sector rose 5.5 per cent from Q1 2013-14 to Q1 2015-16, according to data from the Health and Social Care Information Centre.

One would expect the agency bill to have shrivelled in this period, as new substantive nurses took to the wards, but this was not the case. As we have seen, total agency spending grew substantially over this period (see table, below).

Monitor will not release the total reductions it and the NHS Trust Development Authority have mandated for providers, saying they are commercially confidential and would put trusts at a potential disadvantage against fellow NHS providers.

The total increase over the two years masks a significant slowdown over the year leading up to Q1 2015-16. In this period, the growth was 0.9 per cent and some trusts went backwards on headcount in the second year.

‘Managers don’t want to go to the Old Bailey’

So why did agency spending rise at the same time as employment of substantive nurses? In the words of one hospital chief executive, who declined to be named, “Because managers didn’t want to go to the Old Bailey.” This is a reference to the “Francis effect”, with its duty of candour and potential criminal sanctions for wilful neglect.

He described a situation pre-2013 when a sickness absence would see a trust try and find a bank nurse; failing that, a framework agency nurse; and failing that, a more expensive off-framework agency nurse. If none of those were available, then the ward would go without the nurse. Now trusts pay whatever is necessary to make sure wards are at establishment levels. Like most of the acute sector, this chief executive’s trust is predicting a deficit in 2015-16.

The growth in substantive and agency staff indicates that the number of undermanned rotas in hospitals was higher than previously thought.

Many trusts significantly increased their nursing establishments in this period, although some now have a lower nursing headcount than they did at the start of 2013-14.

This suggests they may have to employ significant amounts of agency nurses as the current financial year goes on.

The 12 organisations are district general hospitals, and they are more likely to see an increase in demand over winter than specialist trusts.

Together, the dozen trusts are predicting a combined year-end deficit of £192m – a disproportionately large share of the total predicted £2bn deficit for the year.

The average sickness absence rate for the acute sector in 2014-15 is 4 per cent. Only seven of the 12 were above this rate in March 2015 – suggesting that these were not trusts with particular morale problems.

One exception to this was South Tyneside Foundation Trust, which reported a 6.37 per cent absence rate in the latest monthly data, the highest acute absence rate in England.

If this rate continues, trusts will spend £3.58bn over the whole financial year, higher than the 2014-15 total – but lower than what the DH’s impact assessment predicted.

The first quarter normally sees the lowest expenditure on agency staff, meaning there could be a larger increase still.

The slowdown in the growth of nursing staff might also indicate likely increases in agency spend.

Conversely, the agency cap and the restriction on agencies being paid more than 55 per cent on top of the normal cost of a shift could bring the total down.

The government has also moved to ease some of the immigration restrictions on bringing in foreign nurses.

Board-level staff at trusts have been told the UK Borders Agency should start processing the applications for foreign nurses in December, which might take some of the pressure off quarter four.

Ben CloverBen is a bureau chief at HSJ and covers the private sector, pathology sector and south London. He has lectured at Imperial College London’s master’s course on health policy.