The 2015 budget did not cause a dramatic shift in the polls or much change for the NHS, but don’t speak too soon, the budget is, of course, simply the prologue to the campaign

The 2015 Budget will not be remembered as a significant inflexion point in the politics or economy of this country.

Conservative strategists will argue that this is the point; a long term economic plan shouldn’t need dramatic short term corrections.

If you are fighting an election on the basis of economic stability, you should probably demonstrate it.

This was a “steady as you go” Budget. No big changes in fiscal policy led to the smallest of short term bounces in the polls.

This was not the Budget to cause a dramatic shift in the polls that many Conservative MPs were hoping for and Labour feared. It also changed little for the NHS.

The mental health announcements are welcome, but hardly scratch the surface of the funding requirements set out in the NHS Five Year Forward View.

Having seemingly fallen over themselves to make spending commitments in the autumn, the parties appear to have become considerably more reticent.

The relative absence of health from the Budget didn’t stop (and may have triggered) a spat between the parties about the NHS.

Labour predictably chose the subject for its first election poster:

The Conservatives hit back with a comparison between the NHS in Labour run Wales and Conservative run England: 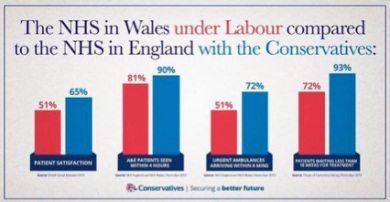 The Liberal Democrats, for their part, were quick to claim that they were a moderating influence on the Conservatives: 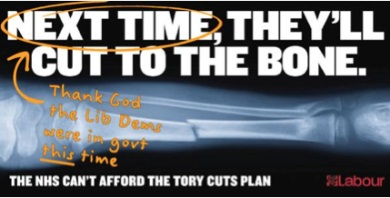 So far, so predictable.

We’ve heard all the lines before and we will hear them again (and again).

But what of the missing £8bn? The NHS England master plan was surely to use the pre-election period to secure its minimum funding requirements for the next five years.

No cut through yet

The Liberal Democrats have, of course, already committed to finding the money, although an electorate that seems to have stopped listening has barely noticed.

Incisive Health polling suggests that the public even fails to give the party credit for action on mental health, which is their flagship issue in the coalition.

Recognition from health watchers has yet to cut through with the electorate. The best the Liberal Democrats can hope for is that policies resonate more in the marginal than they do in national polls.

So what of Labour and the Conservatives?

The Budget is, of course, simply the prologue to the campaign.

As Bill Morgan wrote recently, both parties will be holding back big announcements for their manifestos and beyond.

For Labour, seeking to fight the election on the NHS, it seems inconceivable that a further spending pledge will not be made.

A failure to do so would expose the party on an issue it needs to win decisively.

Presumably every media interview would start with questions over the money. With this and rows over privatisation, Labour spokespeople may not get on to any other health issue.

The Conservatives don’t want to fight the election on the NHS.

Strategists would gladly never speak of it, fearing that health distracts from the economic message.

I have written before about how the Tories cannot afford to vacate the field on health. In an organisation as large and complex as the NHS, things (good and bad) happen all the time.

Having something new to say helps you manage issues. I suspect that Jeremy Hunt – an effective communicator who is highly attuned to media sentiment – agrees with this.

It should not have gone unnoticed that the Tories largely neutralised Labour attacks on health in 2010.

Labour’s failure to make the NHS a major flashpoint was one of the greatest failings of its last campaign.

However, the task was made very difficult by the Conservatives’ commitment to effectively outspend Labour on health in this Parliament, unpopular with large sections of the Tory party as it was.

Seeking to repeat this tactic in 2015 would make sense for the Conservatives.

Make a big spending commitment on the NHS early in the campaign and then seek to close down the debate on health.

If Labour finds itself in the position of having to make up ground on NHS spending commitments, it will become much harder to make health the defining issue of the campaign.

Health may have been the dog that did not bark in the Budget, but the big spending decisions of the election campaign may still be to come.

Mike Birtwistle is a founding partner of Incisive Health