Why we need a staff support commission

We need a staff support commission to deal with issues such as whistleblowing, staff wellbeing and redeployment of staff who are well skilled but who find themselves out of favour with their employer 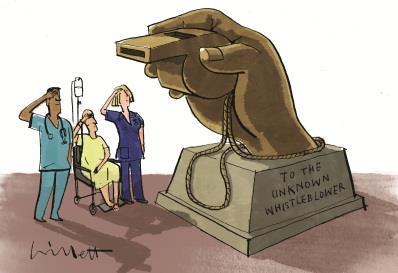 The Francis report, the Berwick review and Ann Clwyd’s review of the NHS complaints system all require that we have a long, hard look at how the service is run, and the government is to be given credit for its response.

There are two sides to a well run health service, the wellbeing of patients and the treatment of staff. There are many indications that if staff who raise concerns are not listened to, this leads to poor patient care.

The issues relating to the treatment of staff are so diverse and so complex that they warrant a distinct body that has this remit. I propose that there should be a staff support commission. It would not regulate, but it would provide specialised support in four main areas.

As the late Dr Peter Gooderham noted a few years ago, there are many ways to “skin a whistleblower”.

Some trusts suspend or dismiss whistleblowers for a “breakdown in relationships”, which will inevitably arise if staff keep raising concerns, or for “bringing their employer into disrepute”, which again is inevitable if they go public with their concerns. Whistleblowers in the NHS need to be praised and rewarded for the courage they have shown in risking their livelihood for the sake of patient safety.

The commission would scrutinize how people who raise concerns are treated, listen to their stories, see whether they have been subjected to unfair disciplinary procedures and whether they got their job back if their concerns had been vindicated after suspension or dismissal. It could also oversee an award scheme for whistleblowers.

The commission would gather evidence on the fairness of disciplinary hearings at an organisation, and whether they were more than show trials. It would affirm whether independence, expertise and plurality were followed in the hearings, with at least an independent chair and two independent panel members, one of whom is an expert in the field of the member of staff. An observer would go to hearings that involved someone who had raised concerns, or where there was an attempt to dismiss someone on the often contrived ground of “breakdown in relationships”.

It would also speak to those who were unfairly suspended or dismissed, and consider issues such as vexatious referrals to regulatory bodies. It would talk to past employees, especially those who raised concerns, since they are more likely to be frank about an employer and suggest lessons that can be learned.

The Francis report describes a case of a nurse who committed suicide after being bullied. Recent surveys of NHS staff have shown a worryingly high level of bullying: in 2012, 24 per cent of staff reported being bullied.

The staff support commission would oversee staff surveys that focus on issues such as bullying, as well as listening to workers’ stories. It would also probe subtle and indirect forms of bullying such as exclusion of staff from meetings, freezing of posts or budgets and “digging for dirt” about staff who have raised concerns. The commission would gather data on staff wellbeing within a hospital, the occurrence of discrimination, how much impaired wellbeing is due to working conditions and what support services are in place for staff who suffer stress or ill health.

It would liaise closely with bodies such as the General Medical Council and the National Clinical Assessment Service. It would see whether support services for doctors are effective and use the latest psychological research in this field. It would also ensure that such services and support extended to all staff.

A dedicated mediation unit within the commission could advise and help managers and staff resolve disputes before they incur the major costs and time associated with commercial mediation or legal action.

This unit would liaise with organisations such as the British Medical Association, and also ethnic medical organisations; doctors from India represent a disproportionately large section of staff in trouble, and their backgrounds and needs are often quite specific.

Commercial mediation services exist, but they are often guided by legal concerns and their expertise and experience with NHS staff can be limited. Nipping disputes in the bud at an early stage would save huge amounts of money that is spent on legal confrontations, and would help to find amicable solutions early.

Where a staff member has been suspended or dismissed, and where it is not at all viable or practical for them to go back to their employer, and where there are no major issues relating to conduct or performance, serious attempts should be made to redeploy them.

A redeployment unit would help employees readjust after their ordeal and to find alternative posts. This is a major issue, since staff who find themselves out of favour with a healthcare body can be blacklisted. Such a scheme has been successfully pioneered in Wales.

People can find it difficult or impossible to get work if they have “suspended”, “dismissed” or “referred to regulatory body” after their name.