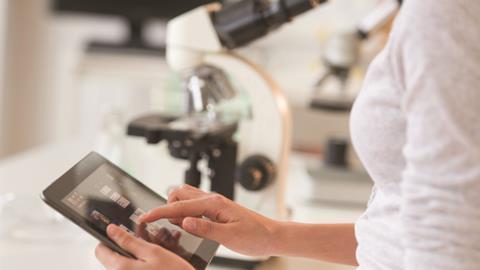 The subtle shift from traditional histopathological techniques to their more sophisticated digital cousins brings challenges as well as benefits. Daloni Carlisle reports on one trust’s experience

There are still some technologically sleepy backwaters in the NHS where new technology has yet to make serious inroads. Given the rising demand for histopathology, it’s something of a surprise to find that this is one such area.

Now that’s beginning to change. Very slowly and very carefully, a small number of NHS hospitals are replacing glass slides and microscopes with digital images viewed on an HD screen.

Because the image can be viewed any time, any place, digital pathology opens up the possibility of new ways of working. The technology also creates an opportunity for developing and applying algorithms to support image grading. Suddenly the management buzzwords of efficiency, productivity and standardisation hove into view.

University Hospitals Coventry and Warwickshire Trust was the first in the UK to introduce the technology and Dr David Snead, consultant pathologist, is leading the work.

Will digital pathology one day be as accepted as PACS? Probably – but there is a long way to go

His lab scientists process tissue samples and create the glass slides in the traditional manner but then scan them using a digital camera. “It’s still a microscope,” he says. “Just a different kind.”

This creates an image in a single file that the pathologist can then view. “It’s a lot like how you would use Google Earth,” explains Dr Snead. “You can scan over the whole image on low resolution and then focus on one area to look at the detail.”

UHCW uses a system developed jointly by GE Healthcare and the University of Pittsburgh Medical Centre.

Moving from an old and established technology to a new one is never an easy process.

The first step was to establish that pathologists could accurately diagnose from digital images. Dr Snead and colleagues last year published a study of more than 10,000 slides viewed by pathologists on both platforms. They found a clinically significant variance in just 21 of them. In 12, the truth lay with the glass slide; in nine it was with the digital image.

Dr Snead says that in practice, 80 to 90 per cent of routine histopathology can be conducted using digital pathology. There are some special cases where a higher resolution scan is needed or where a pathologist still needs a physical view of the glass slide.

But even so, Dr Snead has not switched over for this 80 to 90 per cent just yet. “We are doing a phased rollout,” he says. “We are very conscious that there are still all manner of bugs to sort out along the way.”

One is making sure that images can be tracked from creation to reporting without getting lost– and Dr Snead thinks he has this cracked now with IT supported workflow. Another was integrating digital pathology with the laboratory lab information system.

UHCW currently uses digital pathology in skin pathology (a high volume workload with urgent and non-urgent cases) and general pathology (non-urgent and including the samples that need a check such as a removed appendix or tonsils).

It’s as much about transforming the workflow as using the digital technology for diagnosis. Each digital image is uploaded to a secure cloud-based data centre and enters a queue.

A team of pathologists working from home or on site then take each image from the head of the queue and complete the report that is then sent back to the cloud, from where it can be accessed by the attending physician.

In theory, the pathologist could be anywhere in the world and already some places are experimenting with new workflows that exploit this possibility. One idea is to create an “academy of pathologists” where a group of hospitals call on a network of pathologists, each specialising in a particular area.

He describes a pattern: initial scepticism followed by a realisation that the technology works and is easy to use. Then comes a difficult case where they want to throw in the towel. “If you force them to go through it, they realise that they can do it – and then they say they do not want to go back to the microscope,” says Dr Snead. “They realise there are things they can do more easily and more conveniently.”

Longer term, there are more areas to roll out digital technology – cancer diagnosis would be an obvious one.

And here there is lots of talk about using sophisticated algorithms that could standardise cancer grading and measure the margins of healthy tissue around tumours removed in surgery to nanometre accuracy. This kind of accuracy and standardisation affects the treatments offered to patients.

Dr Snead believes his department is still some way off using such algorithms.

“We need applied maths to tell us the patterns. Very few centres have access to high-quality mathematicians who are able to engage with this problem – and that’s before you have done the validation process.”

Having said that, he is working with a team of computer scientists at the University of Warwick on the next generation of image analytics.

Another area of work is establishing the return on the £1.5m investment in the technology. GE Healthcare and UHCW are approaching this jointly.

Some commentators have likened the potential gain from digital pathology to that of PACS, in which radiology images were digitised. Dr Snead thinks this is helpful – but only up to a point.

Will digital pathology one day be as accepted as PACS? Probably – but there is a long way to go. Dr Snead says:  “Some people will think this is the future and let’s do it now.

“The majority will see that it has got a place but cannot see how it is relevant to them. A small rump will say ‘over my dead body’. This is not going to happen overnight.”