NHS managers will face political opposition to their reforms, regardless of the election result on Friday, an HSJ survey of 367 election candidates suggests. 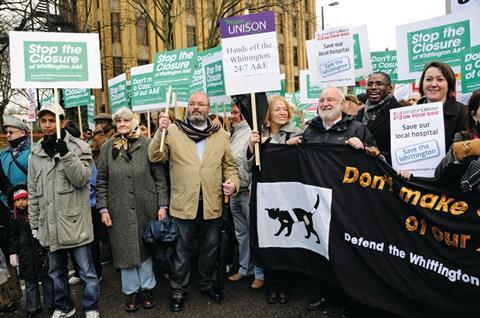 The survey respondents included 329 parliamentary candidates, of which 178 were from the three main political parties. The results reveal that more than three quarters of all the candidates had included a campaign against local NHS changes in their bid to get elected.

Asked if there were any circumstances under which they would support the closure of an accident and emergency service in their constituency, a third from the three main parties said “no”. Only 44 per cent said they would support that if the service was “clinically unsafe”.

Candidates also failed to back the centralisation of specialist and trauma care - even when presented as an argument for higher quality. Thirty-six per cent of all candidates from the main parties said the consolidation of expertise in large centres was not a valid reason for closing local services.

When asked to rank a list of policies in order of priority, candidates from the main three parties ranked stopping the closure of local hospitals first.

Attend HSJ’s post-election briefing for an immediate reaction on what the general election result means for you and your organisation.

Places are limited - secure your place now at www.hsj-postelectionbriefing.com

HSJ also gave candidates a list of 12 areas which might be considered for cuts in the bid to save £20bn. Politically palatable options such as “invest in prevention” were omitted.

Candidates overwhelmingly selected a ban on branded drugs where generics were available as their most favoured option. In second and third place they selected banning or limiting “ineffective” and “largely cosmetic” procedures, for which the examples given were tonsillectomies, grommets and varicose vein removal.

That could offer some solace to NHS commissioners attempting to make significant savings. The controversial McKinsey report leaked to HSJ last September said up to £0.7bn could be saved a year by limiting or banning such procedures.

There were some differences between the three main parties on their preferred savings route. Conservatives were more interested in revisiting the terms of the NHS pension scheme than the other two parties, with 11 out of 19 Conservatives selecting that.

The same number also opted to put inefficient hospitals under private sector control. But Conservatives were notably less interested in introducing full price NHS prescriptions for those who could afford it - an option selected by 18 per cent of Liberal Democrat candidates and 11 per cent of Labour candidates.

Conservatives also eschewed co-payments, which were supported by a small number of Labour and Liberal Democrat respondents. That is despite 37 per cent of Conservative candidates telling HSJ they had private medical insurance, compared with 7 per cent of respondents overall and 12 per cent of the British public.

But candidates were more united when asked to estimate the proportion of the full time health service workforce working in management.

The correct figure is 3.8 per cent, but the largest share of candidates (28 per cent from the three main parties) selected the largest possible proportion given by HSJ - 14 per cent, with only 13 per cent of total respondents getting the figure right and 5 per cent underestimating.

Do Candidates agree with their party lines?

‘The NHS is an expression of our values as a nation. It is a symbol of collective will, of social solidarity’