The Ward Round: Calling BS

Staffing is the issue keeping NHS leaders awake at night – and which consumes two-thirds of trusts’ spending. The fortnightly The Ward Round newsletter, by HSJ workforce correspondent Annabelle Collins, ensures you are tuned in to the daily pressures on staff, and the wider trends and policies shaping the workforce.

Sparks don’t usually fly when it comes to workforce planning, but a health select committee evidence session this week proved to be an exception. 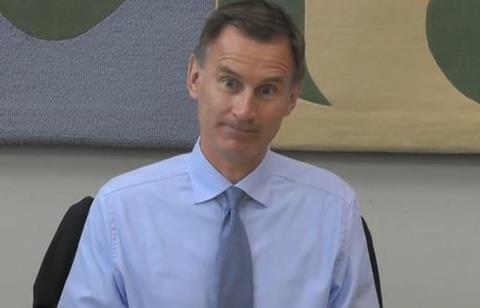 Tension came when the conversation moved on to HEE’s ‘Framework 15’ and whether it would include specific workforce numbers and projections for years to come.

A recap for readers: last summer HEE was asked to “review long-term strategic trends for the health and social care workforce”, known as its ‘Framework 15’. It later emerged the Department of Health and Social Care had also commissioned NHS England to work on and publish a workforce strategy, distinct from ‘Framework 15’.

But back to the evidence session.

Mr Hunt and select committee member Rosie Cooper MP were clear; they wanted to know from the workforce leaders a simple ‘yes’ or ‘no’ answer to the question ‘are we training enough healthcare professionals’?

“It’s complicated” summarises the response from Dr Evans. She argued it was not possible to attach a number to HEE’s framework and argued it was more about skill mix and “the ability to use the framework to start thinking differently”. She argued the healthcare world will be in a very different place in 15 years’ time, so it would “not be possible” to say how many staff might be needed.

Mr Hunt, exasperated, replied: “The secretary of state told us it was ‘Framework 15’ for a reason, because we need to know how many doctors and nurses we will need in 15 years’ time.

“I don’t think we are going to get an answer…We’re going to get a framework or an algorithm, or a way we should be thinking about the problem, which sounds a bit bullshitty to me, to be honest.”

Danny Mortimer responded: “Framework 15 is not the word [bullshitty] you’ve described it as. If your colleagues in government let my colleagues in arm’s length bodies publish the data… if we in the health service are allowed to share that data and share that analysis, we will come close to what you have described.”

Mr Mortimer was clear: the decision to attach numbers to the various pieces of workforce planning “was a political one”.

The Ward Round has discussed the Treasury’s unwillingness to commit to years of expensive workforce spending before. This is also why Mr Hunt’s workforce amendment to the Health and Care Bill, which would have required the government to publish independent assessments of current and future workforce numbers, ultimately failed.

I’m also reminded of comments made by Dido Harding in the Lords last year. Baroness Harding was asked by Mr Hunt, while health secretary, to lead the development of the People Plan.

She said: “The Interim NHS People Plan, published in June 2019… did not contain any forecasts of workforce numbers. Why was this? It was not because the work was not done — it was — and not even because the government disagreed with the numbers.

“There are no forecasts because we could not get approval to publish the document with any forecasts in it.”

Although Mr Hunt was at pains to point out he was not attacking individuals, he lamented the “revelations about much-trumpeted ‘Framework 15’” after the evidence session in his Patient Safety newsletter.

Yes, it is frustrating that there are still no long-term workforce projections, and no workforce plan, but Mr Hunt must be acutely aware of the politics behind the policy?

‘The cost of harm is expensive’

This week trade unions have renewed their calls to the health secretary for an NHS pay rise.

Unison wrote to Sajid Javid urging “significant action” on pay to “stop the exodus of health service staff”, as they face a rising cost of living, along with the rest of the UK.

More than 35,000 health staff and members of the public signed an online version of the letter, which argued that if more staff leave, “those left behind will find it tougher to provide the standards of care patients rightly expect”.

The British Medical Association also weighed in. David Wrigley, BMA deputy chair of council, said: “With inflation rocketing skywards and thousands of doctors seeing the value of their wages plummeting in real terms, this government is playing a dangerous game.”

This was prompted by reports this week in the i newspaper, which suggested the Cabinet wants public sector workers to show pay “restraint”, for fears of “spiralling inflation”.

Royal College of Nursing president Denise Chaffer, expanded on the impact this pay restraint has on the nursing workforce during the same health committee evidence session discussed above.

“We have nurses that are unable to pay their rent, unable to afford their petrol to get to work and are unable to get a mortgage and are relying on foodbanks. Pay is critical. And we cannot get away from that.” Dr Chaffer said.

She added: “When we talk about pay we’re also talking about safe care. The cost of harm is expensive.”