Providers notch up another £800m deficit in three months

The belated publication of financial performance data for the first quarter of 2019-20 suggests little improvement to the provider sector deficit, despite extra money being channelled in.

The new five-year settlement for the NHS enabled around £1.4bn to go into payment tariffs this year.

In theory, this was supposed to mean efficiency targets could be relaxed (with the baseline assumption for these almost halved) and the deficit could be further reduced.

But the first quarter data finally released by NHS England/Improvement suggests a pretty small change to the efficiency requirement, and little improvement in the provider deficit.

It indicates that in reality trusts are having to target savings of around 3.5 per cent this year, well over the baseline tariff assumption of 1.1 per cent, and roughly the same as they delivered in 2018-19 (against a 4.1 per cent target).

But even if they deliver this (which looks unlikely), and despite that extra income, the combined deficit would only come down to £280m, from £570m last year.

There’s a few factors likely to be at play here.

Firstly, much of the extra money has gone into pay increases. Not much can be done about that.

Secondly, as acknowledged by NHSI this year, the provider sector was actually in underlying deficit of around £2.5bn at the end of 2018-19. Lots of one-off savings, from things like accounting benefits and land sales, have long flattered the position and this may now have started to unwind.

Sally Gainsbury, senior policy analyst at the Nuffield Trust, said this wasn’t supposed to happen: “Despite the Treasury, the Department of Health and Social Care and NHSE/I all agreeing that trusts needed much more realistic efficiency targets, trusts are being asked to deliver the same levels of savings.

“Trusts thought there would be sustainable improvement trajectories, but they are being demanded to improve straightaway.”

The figures for the first quarter also suggest there’s already lot of catching up to do.

The data shows trusts reported a combined deficit of £806m for the first quarter, which is broadly similar to the position reported at the same stage in each of the previous two years.

What’s different is the expectations for the remainder of the year.

In each of the previous two years, from a first quarter deficit of around £800m, trusts were optimistically forecasting to reduce the overspend to £500m by the end of the year (implying a surplus in the final three quarters).

The 2019-20 plan goes even further, by forecasting a deficit of £280m by year-end. An even bigger surplus in the last three quarters. 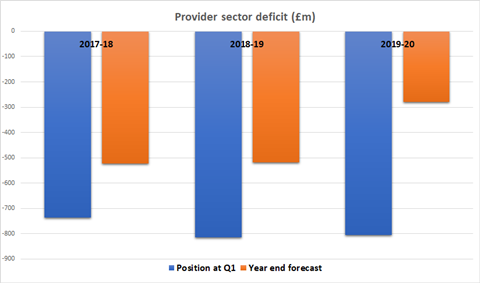 This suggests lots of trusts have agreed tough “control totals” on the assumption they can somehow find the savings in the latter part of the year.

This creates a headache for NHS England and NHS Improvement because it presents huge risk and uncertainty right up until April.

The regulators would rather have savings in the bag early, which is why their joint planning guidance, published back in January, said: “We expect that efficiency plans are appropriately phased and not back-loaded.”

On the face of it, this instruction appears to have been roundly ignored, probably because many trusts don’t know where the savings will come from.

Regulators will know the chances of providers achieving the forecast are slim.

In 2018-19 the final position (-£570m) was only slightly worse than forecast at quarter one, but it benefitted from an extremely handy accounting windfall from the Carillion fallout.

The quarter one performance of providers has typically been published by NHSI in August or early September, so there has been some doubt as to whether the publication was being scrapped this year following the merger with NHSE.

Happily, having being pestered for the last few weeks including publicly on Twitter, the regulators have now published a report. Good news - even if it comes somewhat lighter on commentary than its predecessors, and more than half way through the financial year.

Lawrence DunhillLawrence Dunhill is a bureau chief for HSJ. He joined in May 2015, after reporting on the NHS for regional newspapers in Lancashire. He covers the North West region, as well as national policy, reform and finance. He was named specialist journalist of the year at the Press Gazette’s British Journalism Awards in 2020, for his work reporting on the coronavirus pandemic. He has previously been highly commended for awards run by the Medical Journalists Association and the Professional Publishers Association.