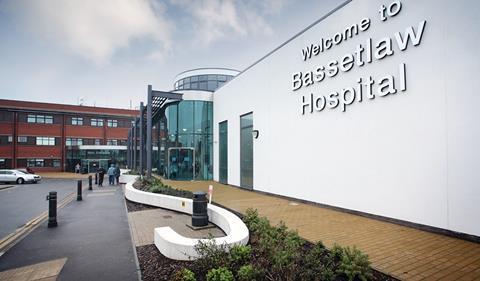 As the chief executive of Doncaster and Bassetlaw Hospitals Foundation Trust, you might expect Mike Pinkerton to have a pretty fancy office. Perhaps that was true a few months ago, but now he and his fellow managers have moved out to make way for patients.

‘We’re trying to provide the same quality of work every day of the week. That has involved increasing diagnostics at the weekend and taking on medical staff’

When it came to sourcing more space, the answer was literally on the senior management team’s doorstep.

“We realised we needed to expand the bed capacity to enable us to meet demand and to give staff the tools they need to do the job,” he says. “The trust headquarters occupied prime clinical real estate at the heart of the hospital, so we decided to release it for patient care.”

The facility is being transformed into a 17 bed ward. Due to open in January 2014, it is part of a wider effort to increase capacity and provide a better quality of experience for patients and staff.

“The move coincided with one of the worst winters the NHS has faced,” says Mr Pinkerton. “At the same time, demand is increasing − particularly from frail, elderly people. The new ward will be dementia friendly and we’ll also have a ‘decant’ ward to allow for deep cleaning to improve infection control. It’s been an opportunity to make improvements all round.”

The directors vacated their offices in the summer and are now in “various boltholes” around the hospital, he says. Mr Pinkerton is “camping” in the boardroom.

“I think the previous headquarters was a bit of a nuclear bunker,” he reflects. “Now that we’re dispersed, I think it’s easier for directors to see what’s going on. In time, a few directors will come back together but it won’t be in a bunker.”

There are risks with allowing senior management to become detached from day to day happenings in hospitals, he adds, citing the Francis report’s observation that the headquarters at Mid Staffordshire was situated on the edge of the site. “Directors entered and left without actually seeing the hospital,” he says.

As part of the £7m plan to expand capacity and improve outcomes, Doncaster and Bassetlaw aims to reduce bed capacity to recommended optimum levels, and to achieve as great a degree of separation between emergency and elective work as possible.

“Our ultimate objective is to separate them,” he says. “We want to introduce an emergency and elective split to insulate elective work from emergencies.”

‘Constantly monitoring workforce requirements is key, ensuring the right number and type of staff are on the wards is a priority’

A new day surgery unit is also part of the solution, he adds, as it will allow more procedures than ever before to be undertaken without the need for an overnight stay.

“We’re quite a high percentage day case provider as it is, but this will make it even higher,” says Mr Pinkerton.

As a result of taking a good hard look at how best to use capacity and infrastructure, the trust is also moving to seven-day working. It has already been introduced in Bassetlaw and is being phased in at Doncaster.

“We’re trying to provide the same quality of work every day of the week. That has involved increasing diagnostics at the weekend and taking on additional medical staff,” he adds.

These changes have been a challenge in leadership, he concedes, but points out that staff have been brought along using a step-by-step approach. “We’ve trialled it in a small number of areas before taking it wider, so we know it works,” he says.

‘If you get the quality right, then you’ll have efficient and safe services for patients − and enough money to look after them’

Constantly monitoring workforce requirements is key, he continues, adding that ensuring the right number and type of staff are on the wards is a priority.

There is also support from local CCGs, he explains, making sure that the whole health economy of the area is working towards the same ends.

He says these investments have been possible because spending in general has been “reined in” at the trust, driven by a largely refreshed senior management team. Its members, crucially, have responsibilities devised to give them a stake right across the organisation.