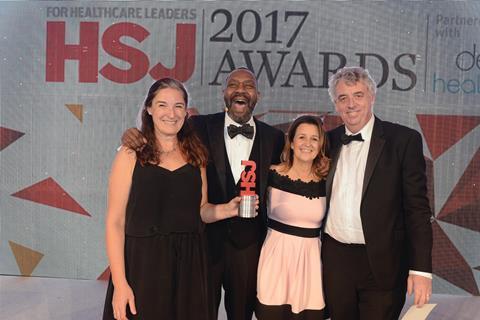 With demand for paediatric outpatient appointments growing by 20 per cent a year at Taunton and Somerset Foundation Trust, and four in five patients seen by specialists discharged after their first appointment without requiring any investigation or follow up, it seemed clear to the trust that a different approach was needed to the care of children and young people.

A review of past referrals revealed that, while historically children and young people had been referred to outpatients labelled with a diagnosis such as asthma, constipation or coeliac disease, in recent years referrals had become more symptom based, with patients referred because of abdominal pain, wheeze and diarrhoea.

There were a number of reasons for these changes, says Sarah Bridges, consultant paediatrician at Taunton and Somerset Foundation Trust, including GPs receiving little if any paediatric training during the general practice training programme, workload pressures in general practice squeezing the time available for GPs to assess patients, and worried parents who had researched their child’s symptoms on the internet demanding referrals.

“In some ways it does result in better quality care because there is more public involvement and awareness of illness,” she says, “but it does mean it’s a needle in a haystack trying to find the person with a long-term condition, where the haystack is getting bigger because more stuff is being referred.”

Taunton and Somerset Foundation Trust worked with local GPs and Somerset Clinical Commissioning Group on redesigning the care approach to better comb the straw to find those patients needing specialist intervention and provide appropriate and timely care to the remainder.

The aim was to create bespoke management plans for many children and young people that, through closer relationships between primary and secondary care clinicians, would see care shared between the two sectors - an approach that has been so successful it received the 2017 HSJ Award for Acute, Community and/or Primary Care Services Redesign.

The team identified more than 30 steps from a child or young person being seen and referred by a GP attending, to them being seen by a paediatrician in hospital.

The Paediatric First Outpatient tariff is £240, and only 5-10 per cent represents the cost of the patient actually being seen by the paediatrician, the rest pays for all the processes and overheads of managing and organising an outpatient appointment in secondary care, the cost of using e-referrals, nurses in outpatients, generating the notes, the capital cost of the building, and facilities management, explains Bridges.

The ambition of this project was to cut out all these unnecessary process steps that add cost, time and inconvenience to the pathway for families, clinicians and the healthcare economy.

Under the redesign all referrals are emailed to a named paediatric consultant who determines in which of three ways the patient should be managed: a bespoke written management plan describing the diagnosis, investigation and red flags is provided to the family and other relevant health care professionals; the patient receives an appointment to see that paediatrician in primary care; or the patient is referred to a specialist paediatrician in hospital.

The new approach was piloted in a GP practice with an annual paediatric referral rate of 80. The paediatrician holds bimonthly clinics at the practice, at which they see eight patients for 30 minutes each. A member of the practice team (GP, GP trainee or nurse practitioner) sits in the consultation, which not only facilitates the joint approach to care but also provides an educational opportunity for them.

The team accesses information about the patient directly from the GP electronic patient record in the GP system and inputs information into that record, meaning the information is available to the practice immediately and avoids the administrative costs of transcribing dictated notes and sending a letter to the practice is avoided. At the end of each clinic, a meeting is held with the practice’s clinicians to discuss referrals over the last eight weeks and any other cases they want to raise.

That pilot has now been rolled out across the areas, after the acute trust and the CCG agreed to a new patient tariff - 50 per cent of the Paediatric First Outpatient - for children and young people seen in this way. The new tariff recognises the reduced overheads for the acute trust in terms of premises and administrative work but retains its profit margin to prevent destabilisation of the paediatric service.

“By charging 50 per cent of the tariff we were able to work out that the trust still gets the same profit but actually the health economy overall benefits and quite markedly,” Bridges said. For every 100 referrals seen in this way, the health economy therefore saves £12000.

Around a third of referrals (over 500/year) are seen by a paediatrician in primary care. Of the remaining referrals, 40-50 per cent have a management plan developed, which is sent to the young person’s family within five working days, and 20 per cent receive a specialist paediatric appointment, which speeds up their care by avoiding the need for them to attend a general paediatric appointment first.

What the judges said

Last year’s HSJ judges highlighted that the pathway had eliminated non-value adding processes and scored it most highly for spread and involvement, because they felt the approach “could be scaled up and replicated in other specialities”.

Cardiff has instituted the approach in one of their city centre GP clusters, and Exeter, Torbay, Bristol and Cornwall are considering trialling it. At Taunton and Somerset FT the specialties of cardiology, care of the elderly and gastroenterology are looking at whether it would be feasible to redesign their care in a similar way.