PET CT scanning has the potential to go beyond its traditional oncology role and help neurology patients too. But the UK needs to radically expand their availability first, writes Ingrid Torjesen. This is the first in a four part series in association with GE Healthcare looking at the people and technology breaking new ground in healthcare 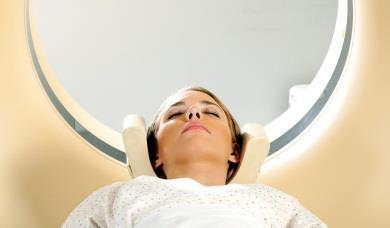 Positron emission tomography computed tomography (PET CT) is a key imaging test primarily used for the diagnosis, staging and management of cancer. Cancer patients are injected with a radioactively labelled glucose (fluoro-deoxy-glucose), and the PET CT highlights areas of cells which take up more glucose, such as tumours with rapidly growing and dividing cancer cells.

More than 95 per cent of PET CT scans are given to cancer patients, but as new radioactive isotope tracers are developed it is likely that the technique will have an increasing role in other conditions. The technique already has a small role in cardiology, but the greatest increase in demand is expected to come from neurology.

Tracers are being developed that highlight the presence of amyloid plaques in the brains of patients with Alzheimer’s disease, meaning that PET CT scanning could have an important future role in its diagnosis and management.

In 2008 two contracts for PET CT scanning in England - north and south - were awarded to the private sector. These end on 31 March 2015 and NHS England is inviting tenders for four new 10-year contracts - North West; North East; Midlands and East Anglia; and South and South West. These contracts make up around half of the PET CT service provision in England.

The remaining services are provided by NHS and charitable trusts, and according to NHS England specialist commissioners are also reviewing these contracts.

The aim of the procurement is to boost scanning facilities in England, because the UK lags behind its European neighbours both in the number of PET CT scanners it has and the number of scans it carries out.

‘PET CT scanners play a key role in diagnosing patients, understanding whether treatments are working and helping our researchers to improve treatments’

But there are concerns that the 10-year contracts could focus too much on how and where services have been provided in the past and not have enough flexibility to develop as imaging needs increase in the future, and demand from outside oncology increases. 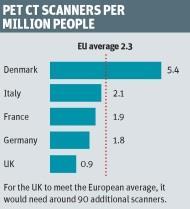 Dr Alp Notghi, president of the British Nuclear Medicine Society, estimates that the UK has around 50-60 PET CT scanners, and in terms of scanners per million population, the UK has less than half the European average.

Since 2008, the number of PET CT scans carried out in the UK has been increasing at around 15 per cent per year, and in Europe the increase has been closer to 20 per cent, he says.

Under the upcoming contracting arrangements, PET CT scanning will follow an oncology hub and spoke model. “The brain centres are not necessarily the same as the cancer centres, so whether we are going to allow PET CT centres to be outside the cancer centres is going to be the big issue,” says Dr Notghi.

Cancer survival rates in the UK lag behind the rest of Europe, and the NHS is trying to address this by tackling delays in diagnosis and access to treatment. Sarah Woolnough, executive director of policy and information at Cancer Research UK, says more work is needed to investigate whether having fewer PET CT scanners was contributing to the UK’s lower survival rates.

‘It’s likely there will be increasing demand for PET CT scanners in the future, as we start to use the technology for more cancer types as well as for other diseases’

“PET CT scanners are an invaluable tool in the fight against cancer and they play a key role in diagnosing patients, understanding whether treatments are working and helping our researchers to improve treatments,” she says.

“It’s likely there will be increasing demand for PET CT scanners in the future, as we start to use the technology for more cancer types as well as for other diseases. It’s crucial that the exercise to improve access to scanners takes this into account.”

The sensitive scans also play a vital role in ensuring patients receive the right treatment, explains Dr Charles Niehaus, chief medical officer at Alliance Medical Group, which was awarded one of the 2008 contracts.

“If the staging of a patient doesn’t identify metastases which have spread from the primary to somewhere else in the body, we could be treating the primary only and leaving the metastases,” he says. And where the spread is extensive, clinicians may decide that expensive treatment will offer little benefit in terms of length of survival and have a detrimental impact on quality of life.

The technique can also be used to assess whether an treatment is working. “After the first or second dose, you can follow up with a scan to check that the tumour is shrinking or responding,” Dr Niehaus says.

In addition to worries about the number of UK units, there are fears that future provision may rely too much on mobile services. Not having access to a scanner on a daily basis adds an additional hurdle for hospitals in terms of meeting referral to treatment targets, and could act as a barrier to innovation and development of services.

Clinicians will not have ready access to diagnostic expertise to discuss a patient’s condition, or the opportunity to use scanners for research purposes in terms of developing new tracers or to monitor a patient’s response to treatment in clinical trials.

On the day I’m writing this, the FT’s front page is reporting Apple’s push for “Jetsons style home automation”, turning the iPhone into a remote control for household appliances like lights and security systems. Mention “innovation” and this is the sort of next generation, endless possibility technology that springs to mind.

Technology has a vital role to play in the future of sustainable healthcare in the UK, but it is not the only sort of innovation that the healthcare system needs. PET CT is a case in point - the technology is great, but it has been around for a while so can no longer be considered innovative.

We need new thinking to tackle increased demand with decreased budgets. Technology can go a long way towards supporting this, but innovation needs to begin with long term planning and appropriate procurement.

The proposed tender for the UK’s PET CT provision marks a milestone for the next 10 years of cancer services provision in the UK, yet it seems close to a direct renewal of its predecessor. Mobile PET CT facilities have been effective in the past, servicing multiple hospitals in regions where access is poor, but are they the right long term solution?

When costs appear to be comparable for kitting out, road and safety testing mobile trailers to fixing static units within hospital walls, is it the right time to consider a bolder, more innovative approach?

PET CT is currently provided at 28 sites in the four areas covered by the procurement, but only nine of these have static facilities, the remainder relying on a mobile service. Karl Blight, general manager at GE Healthcare Northern Europe, which manufactures the scanners, says: “The concern is that we are going to be stuck with this mobile or static service for the next 10 years without actually being able to develop it too much.”

Birmingham City Hospital, where Dr Notghi is based, sends a few hundred patients a year to University Hospitals Birmingham Foundation Trust for PET CT scans and is hoping to get access to a mobile scanner.

“The biggest benefit will be the expertise that it brings and communication with clinicians,” he says. “Much better than sending it somewhere else and just getting a written report.” Dr Notghi sees a mobile unit as an essential step to demonstrating that the hospital has enough patients to justify a static site, which he would prefer.

Dr Niehaus says: “Mobiles are good to establish the service. In the long run we want the clinician to have the confidence to know that if he has an emergency case and he’s got a multidisciplinary team meeting to determine the treatment of the patient, he will have a PET CT available. What happens with a mobile is that it is not always available in the timescales that these [meetings] happen.”

Mobile units only visit on certain days, and may be fully booked. “They would need to move at seven or eight o’clock that evening to be on site the next morning at seven o’clock, so you can see how fitting in an extra patient, which sounds very sensible, becomes a real challenge,” Dr Niehaus says.

Guy Blomfield, chief executive of Alliance Medical Group, says: “It is quite right that some hospitals will continue to have a mobile service, but the point at which they need the static service is probably sooner than might be in the mindset of the commissioners.”

An installed base within the hospital can help improve radiotherapy planning, development of broader and more specific cancer pathways, and of non-standard fluoro-deoxy-glucose isotopes, he adds.

Asked about plans for future proofing the contracts, a spokesman for NHS England said: “NHS England is aware of the need and importance of future proofing all aspects of the service, including the anticipated increasing demand for clinical PET CT.” But he gave no details on how this will be achieved.