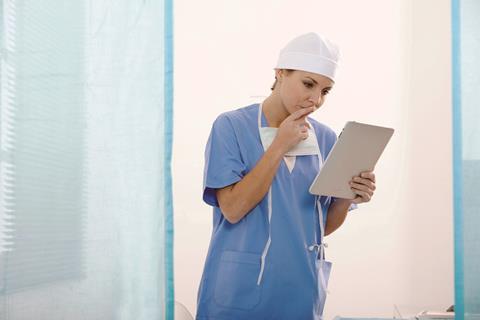 At your fingertips: tablets can be used to access records on the move

In the same year, research published in BMJ Quality and Safety, showed how much could be achieved by replacing paper-based approaches with technology designed to improve the accuracy, reliability and availability of patients’ vital signs, and early warning scores.

‘This kind of technology has great potential to improve outcomes of care, including saving lives’

Across the country, trusts are putting these findings together and turning to technology to identify patients at risk of deterioration and improve their care. But take-up is far from universal.

So, is technology the answer to solving the problems highlighted in Sir Liam’s report – and, if so, what can be done to improve take-up?

Advocates, such as Sonia Swart, chief executive of Northampton General Hospital Trust, see it as part of a wider drive towards change at every level.

“This is very much part of our work on patient safety and service improvement,” says Dr Swart, who wants managers and clinicians to have the real-time data they need to see exactly what is happening in their area of responsibility.

Northampton’s use of mobile technology is already allowing nurses across 650 of the 750 beds to monitor patients for early signs of deterioration far more effectively than ever before.

The VitalPAC system is being rolled out in other areas of operation and to other groups of staff, including doctors, who will carry mini iPads to access records and share them with patients. This is an element of Dr Swart’s broader vision for professional approaches which includes putting doctors back in white coats - something patients asked for.

When a nurse identifies a patient at risk, a doctor will be contacted and will arrive at the bedside, introduce themselves by name and explain what they are doing “rather than just diving straight in with tests”.

‘Staff felt that the technology did not just save them time, it empowered them as clinical decision makers’

At the macro level, the data provided by VitalPAC enables Dr Swart to know exactly which patients are where and how sick they are, helping predict demand and manage resources.

“Seeing what’s going on in the entire hospital is invaluable. If we can make it safer, and improve the quality of care, that will help me in achieving my other targets, including financial outcomes,” she says.

Sir Liam, who witnessed the same system in operation at Croydon, says: “I saw the great benefits of bringing clarity and focus to the complex task that busy staff face in manually observing so many acutely ill patients and making early interventions.

“The staff I spoke to were extremely positive and felt that the technology did not just save them time, it empowered them as clinical decision makers. This kind of technology, if used more widely, has great potential to improve outcomes of care, including saving lives.”

Paul Schmidt, a consultant at the Portsmouth Hospitals Trust Medical Assessment Unit, is part of a research group with a long-standing interest in patient deterioration, and was lead author of last year’s BMJ Quality and Safety paper.

He says that one of the most significant breakthroughs came after the trust formed a collaboration with The Learning Clinic to develop the mobile technology to gather large quantities of highly accurate observations as part of routine care. This was used to rank existing early warning scores and then to develop a new one – which was then adopted nationally by the Royal College of Physicians in 2012.

Digitisation, through the creation of VitalPAC by the Learning Clinic, highlighted high error rates in paper-based observations, underestimating the patient’s seriousness.

Research at Portsmouth and University Hospitals Coventry and Warwickshire Trust later explored that the mortality rate declined as VitalPAC was deployed. Across the hospitals 750 lives a year were saved.

Dr Schmidt says: “A fundamental problem with paper is that the only person who necessarily knows the data is the nurse who does the recording. Retrospective looks often show that there were signs there that should have been acted on. This system ensures all relevant data is gathered then pushes it on to other people, ensuring appropriate action is taken.”

Its use in other areas, such as infection control, has seen ward closures due to diarrhoea and vomiting plummet.

Dr Schmidt says: “The focus needs to be on the basic care processes. You can be operated on by the most gifted surgeon in the world or have the most up-to-date treatments from the best physicians, but if there are errors in the care process it might all be undermined.”

It’s a view reinforced by Nick Elliott, former chief operating officer of University Hospitals Coventry and Warwickshire Trust, who is now client engagement director at The Learning Clinic. He entered the NHS from industry where he was used to having real-time data on every aspect of a factory’s functions.

“It was a surprise to find that this kind of information was not being gathered, let alone put to use. The crises of this winter would have been far less difficult had hospitals got real-time data rather than dealing with everything on retrospective and often inaccurate information that was time-consuming to gather and soaked up staff time. We need to be gathering and using data far more effectively to anticipate and prevent.”

Mr Elliott claims the ready availability of real-time data is allowing hospitals to cut stays by 10 per cent and his aim is 20 per cent as the company is developing an entire workflow system. At the same time, managers are able to redeploy clinical staff because they no longer need floor walkers.

He argues that getting rid of paper is only half a solution; the real issue is whether you actively maximise your capacity to mine data and use it to yield positive change. “A lot of systems simply take your paper form and hang it on a screen when the real point is to do something intelligent with it,” he says.

Going paperless can bring direct benefits to the NHS by enabling quicker and more accurate data recording and eliminating the need for repetitive form filling. This is important: for instance, the best electronic patient observation systems are up to 40 per cent faster than information recorded by hand on paper charts and almost 100 per cent accurate.

But the real transformative potential of going paperless is not in its ability to replace manual tasks. Rather, it is in the insights which human beings can draw from digital record datasets.

‘Data-driven insights can lead to quantum leaps forward in care’

An example is the creation of the Royal College of Physicians’ National Early Warning Score, used across the country to identify deteriorating patients early: this algorithm, drawn up by clinicians, was tested against datasets created by the first electronic patient observation system. This digital data was analysed to reveal life-saving patterns in a way that would have been totally impractical using paper records.

The scoring system – designed by people, validated by digital data – is now built into the patient observation system, and peer-reviewed studies have found its roll-out has been followed by a 15 per cent drop in mortality rates.

We have also seen electronic monitoring of infection risk factors, for instance diarrhoea and vomiting, lead to practice changes which have seen infection outbreaks at one hospital drop by 94 per cent. This shows how data-driven insights can lead to quantum leaps forward in care, bringing not just benefits for patients but large cost savings for the trust.

As digital records spread from the bedside across the hospital, further benefits are emerging. It is impossible to manage bed use efficiently across a trust if real-time information about each ward’s bed use is only accessible on the white board in each ward office.

If, however, executives have an instant, constantly updated, electronic picture of bed use across the hospital, they can start to make better decisions about use of beds. Such information is vital for improving patient flow: it can help identify bottleneck, allowing – once again – people, not machines, to take better decisions.

We like to say going paperless with electronic patient observations gives nurses time to care. That’s true, and that’s important. But just as important is the way that from the bedside to the boardroom, going paperless gives people time to think, and creates the data they need to inform that thought. That, in my view, is the real prize for the NHS.