Survey: Funding pressures are holding up the paperless NHS 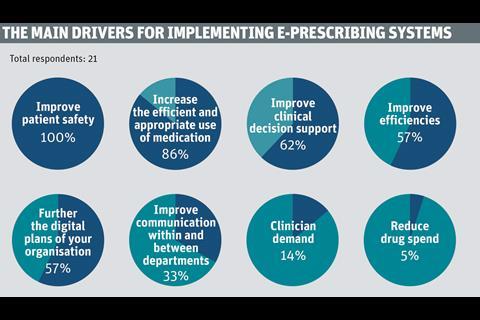 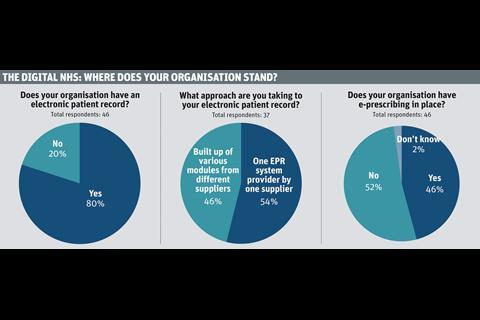 Funding pressures seem to be the principal obstacle to digitising key NHS systems such as patient records, a new HSJ survey of senior managers suggests. And while most see digitisation as a priority, some have their doubts. Claire Read reports

The news that Tim Kelsey is to leave his post at NHS England, exclusively broken by HSJ last month, will have come as a surprise to many. The intense online debate which followed the revelation was much less unexpected, however.

In his role as national director for patients and information, Mr Kelsey has often been a divisive figure.

Where there was and is little room for debate, however, is on his belief that digital healthcare is essential to delivering high quality services. Writing in HSJ a couple of weeks before his resignation was announced, Mr Kelsey went as far as to characterise urgent action on a digital NHS as a “moral imperative”. “Patients are put at risk where paper is the currency of clinical practice,” he argued.

Whoever replaces Mr Kelsey is as yet unknown, there seems little doubt that he or she will be taking on an agenda that will remain a priority at the national level.

The Five Year Forward View identifies better IT as a key factor in closing the £22bn funding gap, and of course the aim of a paperless NHS is a stated priority for health secretary Jeremy Hunt – even if 2018 now seems to be the goal for patients to access and add to their own health records, and 2020 for the revised goal of full paperless status.

It is in this context that HSJ recently garnered the views of senior managers on digital health. Our survey, run in association with software and technology specialist Civica, was completed by 46 people in healthcare organisations, many of them chief executives and chief technology officers.

It explored the extent to which these leaders see digital healthcare as a priority – and revealed something of a mixed picture.

Take the creation of a paperless health service. While 87 per cent described it as high or very high priority, the remaining 13 per cent saw it as low or very low priority. Notably, even among those who did see it as important, there was concern about how realistic an aim it is.

“Not achievable by 2018,” said one acute trust chief executive in the north west. “It will be dependent on funding,” reported an acute trust information management and technology lead who nonetheless saw going paperless as a very high priority.

There was limited interest in NHS England’s intended way of helping organisations understand where they are on the journey towards digitisation. The clinical digital maturity index (CDMI) was launched in November 2013 and designed to help leaders understand their organisation’s digital capability. Yet almost 40 per cent did not know their ranking, and those who did were not always convinced by its value.

“The NHS England CDMI is unnecessarily complicated,” said one chief technology officer at an acute trust. Perhaps related to this, almost 40 per cent said improving their ranking was of low or very low priority.

‘The building blocks for digital capability are often present’

Our survey suggests that the building blocks for digital capability are often present, however. Eight out of every 10 respondents reported that their organisation has an electronic patient record (EPR) in place, for instance. Yet the degree of implementation varied.

And as one acute trust chief technology officer put it: “Although [our EPR] is fully implemented across the hospital, we are still developing it” – an acknowledgment that digitisation is a journey rather than a definitive destination.

‘Digitisation is a journey rather than a definitive destination’

Many of those lacking an EPR said they had plans to change that in the near future (78 per cent), with all of them describing such plans as high or very high priority. When asked what form they expected their EPR to take, a significant minority (29 per cent) suggested that they would be taking a “best of breed” approach: acquiring different modules from different suppliers which would together make up their EPR.

“We will aim for one but that’s unlikely, and [we expect] to end up having a majority from one supplier plus others with integration,” said one head of information management and technology. Interestingly, 46 per cent of those who said they already had an EPR had taken this best of breed approach.

Thoughts on the obstacles to the digital journey

“I’m disappointed by the lack of central support and funding. The technology fund was also a disappointment.”
Corporate director

“It is difficult and expensive. We can manage the difficult bits, but we need help with funding.”
Chief technology officer

“[Digital health] is fundamental to moving into new service models such as an accountable care organisation. [Clinical commissioning groups] in our area are rudderless and have no capability to deliver the necessary building blocks for new care services.”
Chief information officer

“There seems to be a lack of understanding about the long term capital costs of replacing equipment. The increases in the use of IT are not matched by an increase in capital or revenue from the centre.”
Chief technology officer

“Desire is very high. Funding is the obstacle.”
Head of information management and technology

“We need to move the digital healthcare conversation on from EPRs and e-prescribing towards patient focused digital health, ‘internet of things’, and using data/analytics for improved healthcare planning, delivery and monitoring.”
Chief technology officer

“An EPR is a clear part of the trust’s strategy and vision, key to releasing efficiencies going forward in an already very efficient organisation. But currently unaffordable and will not be [affordable] for five-plus years.”
Chief executive

Yet over half of those we surveyed said they had no such system in place at their organisation, and that clinicians are still prescribing via pen and paper. Of those who did have such a system, only 29 per cent said it was fully implemented across their entire organisation. Said one: “Lack of funds has prevented full rollout.”

Which is not to say that those who had moved to e-prescribing were unconvinced of the benefits. Over 80 per cent said they felt they had seen improvements as a result – primarily around safety and reduction in medication errors. An acute trust chief executive in the North West, whose organisation has had e-prescribing in place for over two years, reported: “Fewer unreadable scripts, fewer transcription errors, more timely for patients, less duplication, more complete medical record.”

Those potential benefits are perhaps why the vast majority (92 per cent) of those without e-prescribing planned to implement it. Timeframes for implementation varied hugely, however.

Those with no e-prescribing system and no plans to implement one cited a lack of clinical demand and a belief that other digital projects were more important.

Similar feedback was received from those who said they had no current plans to implement an EPR: with concerns about expense and lack of staff to support implementation also creeping in.

Indeed, resources were – predictably – the theme when it came to obstacles to healthcare digitisation.

“This is a high priority for the NHS as a whole,” argued one health informatics director from the North West.