1
Advice from emergency consultants one phone call away 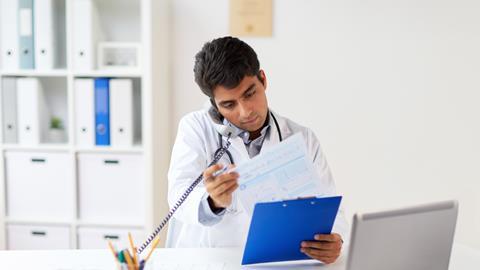 A Scottish health board has rolled out a system that provides GPs and paramedics with immediate advice and guidance from emergency department consultants, reports Jennifer Trueland

Implementing a system giving GPs and paramedics access to immediate advice and guidance from consultants in the emergency department and acute medical unit is paying off for a Scottish health board.

NHS Tayside has seen a significant impact since introducing the Phone Advice & Guidance service last September, with nearly a third of calls from GPs and paramedics resulting in an avoided emergency admission.

Support is available immediately by calling a single number to reach a phone held by a consultant at the region’s main hospital, Ninewells in Dundee. Junior doctors at the smaller Perth Royal Infirmary can also use the number to source advice from a consultant out-of-hours.

GPs, paramedics and junior doctors have responded positively to the initiative, as have consultants in the ED and AMU.

Advantages include the fact that all calls are recorded, giving a real-time record of the advice that was given, improving safety and governance.

GPs and paramedics also appreciate having one number to call – with the phone being answered by a senior member of the medical team, usually a consultant.

The app also allows GPs and paramedics to take photographs on their mobile phones in a safe and IG-compliant way. The photograph can then be attached to the patient record.

The service will also be trialling the real-time transmission of clinical photos and notes from remote locations back to the Ninewells emergency medicine team, which will then be accessible on screens including within the resuscitation room.

Improving the flow through emergency departments is not simply a matter of employing more staff – it’s also about making sure that everyone who attends actually needs to be there.

This is easier said than done, as shown by worsening performance against ED waiting times targets in hospitals across the UK and beyond, which also has a knock-on effect across local health and care economies.

Reshaping unscheduled care has been a key plank of transformation at NHS Tayside, one of Scotland’s 14 geographic health boards: an important part of that has involved ensuring that services, including the ED, are used appropriately.

Carol Goodman, who, in her role as general manager for the medical directorate at NHS Tayside helped spearhead the changes, says the approach has been multifaceted. “We’ve done quite a lot of work to transform unscheduled care in Tayside, which has included a really robust redirection policy,” says Ms Goodman, who is now regional programme manager for the North of Scotland region within NHS Scotland, which includes NHS Tayside.

But it also means ensuring that everyone involved in hospital admissions, from the GP making the referral to the paramedic called out to see a patient, is on board – and has speedy access to advice and support if they are not sure whether a person needs to be in hospital.

That’s where professional-to-professional advice systems come in: for several years, NHS Tayside has given GPs and paramedics the option to ring through to speak to hospital-based clinicians for decision-making support.

While this was helpful, it wasn’t ideal, with challenges including getting through to hospital switchboards at busy times, and then making contact with the relevant professional.

There was also a question of governance: the calls weren’t routinely recorded and although clinicians were supposed to write up the advice they had given in a book laid out for the purpose, this didn’t always happen. Even when it was written up, it could be some time later when the clinician had a gap between patients and other work.

One number to call

In September 2018, NHS Tayside introduced Consultant Connect’s Phone Advice & Guidance service. This gives paramedics and GPs one number to call, getting them straight through to a senior clinician – usually a medical consultant – in the ED or AMU, bypassing the need to go through switchboard or bleep the doctor on call. Importantly, the calls are recorded, giving a real-time and accurate record of the advice given.

Emergency medicine consultant Ron Cook, who is also clinical care group director for urgent care at NHS Tayside, says it’s about ensuring people are treated in the best place for them.

Although it has been available in Tayside for less than a year, Phone Advice & Guidance is already notching up around 300 calls per month from paramedics, around 200 from GPs, and around 600 from junior doctors based at Perth Royal Infirmary.

Feedback from users has been positive and the service reported outcomes from NHS Tayside are even more impressive. Almost a third of calls from paramedics (30 per cent) have resulted in the patient not being conveyed to hospital, with a further 5 per cent being sent directly to a clinic or outpatient department.

For GP calls, around a fifth of calls resulted in the patient being treated out of hospital, while 11 per cent were sent directly to clinic or outpatient department.

For Rod Fleming, a GP in Dundee’s Erskine Practice, Phone Advice & Guidance has proved a useful source of support. He cites one case where a young mum had attended the surgery with an upper respiratory tract infection and a pain in her upper left side. “I wanted to get a chest X-ray [there is open access x-ray in Dundee] but we wouldn’t have got the report for seven to 10 days,” he explains.

Dr Fleming spoke to the AMU consultant who agreed to look at the X-ray as soon as it was done, and speak to the patient by telephone. The patient was prescribed antibiotics in case of pneumonia, which is what it turned out to be.

“It saved her having to go up to Ninewells, and meant she could stay at home. This was good for the patient, who had two small children, but also good for the health service as it meant she was managed in the community rather than in hospital.”

Mr Cook says the system is also working well for hospital consultants, who take it in turns to hold the phone (never when they are in the resuscitation team). And staff can actually see it paying off. “The last time I held the phone, when I took the third call in two hours I realised that this was the third person who wasn’t coming into hospital,” he says. “That’s a real result.”