3
Roundtable: Why community nurses suffer from lack of shared data
Technology and innovation

Roundtable: Why community nurses suffer from lack of shared data

Community nurses are at the interface between health and social care, often caring for patients who are also receiving social care. Shared information could help them see a more holistic picture of the patient and their needs, and contribute to finely-balanced decisions such as whether remaining at home is the right thing for a patient.

Still waiting for the digital age 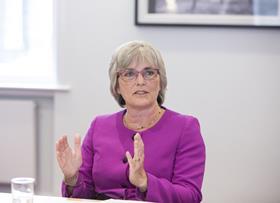 But despite this pivotal role, community nurses often don’t have good access to information – whether held by partners such as social services or by their own organisation.

QNI chief executive Crystal Oldman said a survey of 500 members had shown that 27 per cent were still paper-based and some had not even been issued with a phone by their employers – despite often working alone. Many used systems that were old and clunky and had not been designed with clinical input.

The QNI had done a similar survey five years ago but what was different about the current one was that there was no money to put things right, she added.