The use of a new approach to ward rounds at one trust is helping to standardise the review of care, improve communication and reduce length of stay, writes Helen Beel 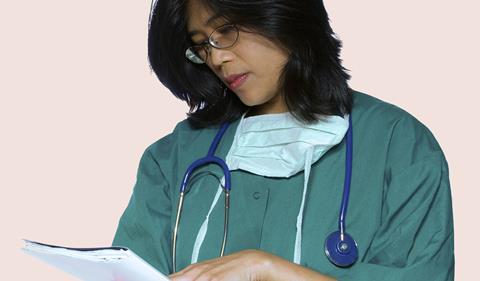 Consultants at United Lincolnshire Hospitals Trust now use a document called Plan From Every Review to capture the decisions made during their daily ward rounds.

This has resulted in improved communication between the multidisciplinary team by ensuring a clear and concise plan of care for every patient.

‘Some consultants will see the document as “just a form”. Others will be more open’

One consultant physician understood the need to improve planning to reduce delays and to ensure that his patients had the right length of stay for their condition. A small project was started with the support of the clinical improvement team. The design and testing of the document took 12 months.

The project set out to:

The way the plan is documented is the critical step to ensuring the patient received the right treatment at the right time, with the right length of stay for their condition.

The plan is divided into sections to provide clarity around:

The document was developed, tried and tested through 12 rigorous “plan, do, check and adjust” cycles.

Originally designed for medicine, the next step was to replicate the same principles in surgery.

‘Some clinicians realised the benefits to their patients, but sceptics believed it would not suit their specialty’

The response from surgeons was mixed; some did not believe that something designed in medicine could be transferred to surgery. We did find one surgeon who was willing to try and as the clinical improvement team worked with this consultant surgeon he found that the principles had been so rigorously tried and tested that the format required minimal adjustments.

The challenges were around the pace and speed of the ward round and ensuring that time was protected to allow for clear and concise documentation of the decisions made. The key was to ensure there was a sufficient resource in the form of junior doctors to scribe during the round.

The surgeon and the physician worked together and a set of standards was developed to support the completion of the ward rounds document. These standards were documented in the form of standard operating procedures, which detail the logical steps required to complete a specific process.

The rollout was initially encouraged through peer persuasion. However, the lead physician struggled to persuade all of his colleagues to use it. There was enthusiasm from some clinical colleagues who realised the benefits to their patients, but sceptics believed that it would not suit their specialty.

Our chief executive saw the benefits and initially mandated the use of the document in medicine, but some physicians still chose not to use it. It was not until the trust was placed under the external scrutiny of the Keogh review that our medical director instructed each of his clinical directors to ensure their teams were using it.

Clinical directors were encouraged to adjust the generic document to add any safety critical steps necessary for their specialty.

The graph below highlights some of the process measures and the improvements. These results were gathered from 40 sets of notes about the quality of 120 ward round entries. 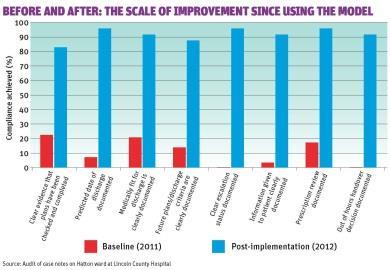 The key performance indicator for the document is the number of tasks documented as completed in full and on time. It is used as the basis for a simple trust wide audit which sets out to monitor any gaps in the agreed standards. These results are shared with clinicians who in turn use them to drive improvement.

The benefits of Plan From Every Review

4. Reduction in length of stay

To adapt this model for other organisations it is important to:

Our learning would suggest that a flexible approach to supporting consultants to implement the document is essential. Some consultants will need lots of support, others will not.

It may require a consultant to amend the way they review their patients during their ward round, and support for this change might be needed. Some consultants will see this as “just a form”, others will be more open to receiving full guidance on the key elements.

‘Jobs lists were shredded at the end of the day, creating a gap in effective communication’

One of the biggest challenges was to encourage junior doctors to change how they documented when a task assigned to them had been completed in full.

They would use a jobs list to tick off tasks. These lists were shredded at the end of the day, destroying the evidence and creating a gap in effective communication. As their consultants raised the expectation that all tasks needed to be evidenced as completed in the clinical notes, we saw an increase in compliance to this standard.

The rotation of junior doctors and the constant need for retraining meant that since the trust wide rollout, we have developed an online learning tool designed to be used during the induction phase for junior doctors.