Ministers’ headline budget pledge to alleviate pressure on the NHS by handing councils an extra £2bn for social care will fail to deliver “anything like the level of resource” required, NHS leaders have warned.

Chancellor Philip Hammond used the pledge, alongside an extra £100m for emergency departments, to underpin his claim that the Conservatives were “the party of the NHS” – a key battleground in the general election campaign. 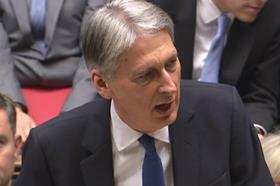 The chancellor claimed the Conservatives were ‘the party of the NHS’

System leaders said following the budget announcement that the cash, which is for the next three years, could help “free up in the region of 2,000 to 3,000 acute hospital beds” by speeding up delayed discharges of care, equivalent to around five hospitals, in 2017-18 alone.

But NHS leaders have told HSJ that early discussions with local government counterparts indicated the new cash would instead be used by councils to fill existing budget gaps and provision, help stabilise private sector providers, and offset some of the cost burden resulting from the national living wage.

A new government after the general election on 8 June would need a “plan B” to avert an NHS winter crisis, they warned, with one senior source saying senior figures were “seriously worried” about the winter.

NHS Providers chief executive Chris Hopson said: “Trust leaders are doing all they can to secure NHS benefit from the extra social care funding allocated in the budget. However, for reasons we understand, early indications suggest that the NHS will not see anything like the level of resource from social care to reduce delayed transfers of care and safely manage next winter.

“As the better care fund has showed, you can’t spend the same pound twice. So, if the NHS can’t secure the extra capacity it needs from social care funding, we have to find it another way. Developing an NHS plan B to navigate next winter must be one of the new ministerial team’s top priorities”.

One provider chief executive said: “The first reaction of most councils has been to tell us ‘you won’t see any difference. This is just topping us up for the money that was taken away from us over the last five years, and now we won’t have to dip into our reserves.’”

The chief executive added that a “huge opportunity” had been missed and the money would have been far more effective had it been distributed through the sustainability and transformation planning process.

Another senior NHS source said the “arm wrestle” over the cash between councils and the NHS extended into Whitehall with the Department of Health trying to exert pressure on the Department for Communities and Local Government over how the cash is used.

The guidance said additional funding could be spent on reducing pressures on the NHS, as well as ensuring that the local social care provider market is supported, including helping to cover the cost of implementing the national living wage.

The budget, published in March, said the £2bn would be handed out between 2017-18 and 2019-20 “to help ensure people receive the social care support they need and to reduce pressure on the NHS”. But NHS organisations had no formal influence.

NHS England, the DH and the Local Government Association declined to comment due to purdah.

A Conservative party source said they rejected that the funding was being released in a way which would not impact the NHS. The source told HSJ: “Conditionality has built into the funding process [by the guidance set out last month]…Specifically, that we want [the new funding] spent in a way that eases pressure on the NHS.”