It is worth the NHS exploring at least the high-level detail of what could be a hugely significant review into the post-18 education world, writes Michael Wood 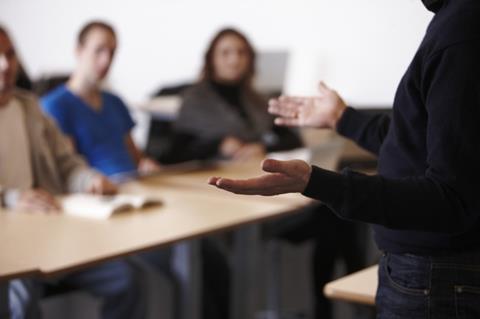 Having worked in the university sector, recently I was approached by several former colleagues earlier this year to explain some of the thinking behind the NHS long-term plan and where and how universities might best engage.

In this same spirit of partnership working, and not being shy about digging into other sectors’ business, it is worth the NHS exploring at least the high-level detail of what could be a hugely significant review into the post-18 education world.

The Independent panel report to the Review of Post-18 Education and Funding was finally published on 30 May, giving light to something that has caused anxiety for several university ministers since it was first announced by the prime minister herself over a year ago.

Chaired by Philip Augur, an author and former non-executive director of the Department for Education, the eponymous review took aim at the disparity between the 50 per cent of young people who participate in higher education and the rest.

To put it bluntly, Dr Augur’s job was to address driving up quality, increasing choice and ensuring value for money.

First, we should note that this review is about colleges (FE) as much as universities (HE). While Dr Augur recommends undergraduate tuition fees should be capped at £7,500 by 2021-22, he states that HE funding should be frozen for three years to “help fund investment in other parts of post-18 education” – thus rebalancing the funding relationship between higher and further education.

The introduction of a lifelong learning loan allowance to be used at any stage of an adult’s career for full and part-time students, and which can transfer between institutions, is also a positive sign that education is for the many, not the few

Those familiar with the focus on technical education in the government’s Industrial Strategy will see the consistency in this approach to skills, with Dr Augur calling for a range of new investments to improve sector-wide FE facilities, status, workforce, industry-links, data and greater networking.

Apprenticeships are referenced here too, with future prioritisation and take-up expected to reflect the priorities of the economy.

Universities will breathe a sigh of relief that the review states losses incurred by lowering tuition fees should be made up by increasing the teaching grant, meaning they will not fully bear the difference.

However, this teaching grant should reflect “more accurately the subject’s reasonable costs and its social and economic value to students and taxpayers”, which will reduce sector income.

Similarly, there is a clear warning to universities that unless they address courses with poor retention, employability and long-term earnings by 2022-23 the government should intervene (along the lines of minimum entry thresholds, for example).

And what of the learners themselves? In HE terms, along with fee capping, restoring the maintenance grants for socio-economically disadvantaged students will go down well, though extending the repayment period to 40 years would leave many students at least considering a forthcoming working-lifetime of debt.

The introduction of a lifelong learning loan allowance to be used at any stage of an adult’s career for full and part-time students, and which can transfer between institutions, is also a positive sign that education is for the many, not the few.

What does it mean for the NHS?

Many words will be written about the specifics of the review and what they might mean for the future health and care workforce (and one would hope those writing the NHS people plan have digested it) but we shouldn’t forget that, as fellow anchor institutions, universities and colleges are key local partners in many different ways.

Often thought of as the local institutions that are awash with cash (“the only ones building”), the proposed changes in the fee system will bring cuts for HE estimated at 11 per cent over five years.

This will certainly eat into the ability of universities to resource important non-teaching initiatives which support the health sector, such as research and development, local economic partnerships and new innovative place-based ideas.

In provision terms, nursing and healthcare are examples of modestly paid but socially valuable professions, reflecting that the social and economic value of a degree is not always reflected in wages.

There will also be concern for those HE institutions cross-subsidising expensive medical schools through other teaching programmes.

Dr Augur’s push on technical education should make the NHS aware, if it wasn’t already, that FE are key local partners and that lifelong learning is something employers need to support.

Investment into this sector by the government should be matched by investments in time by integrated care systems seeking to understand how to drive young and older students into health and care via this route.

Our rival sectors are already doing just this as local labour markets near full employment.

This review is only focused on post-18 education in England. The reduced tuition fee cap would be less than that in Wales, while the maintenance grants could well end up higher than bursaries in Scotland.

Similarly, there is little on international students. There may be unintended consequences of this in terms of student choice.

Taking the pulse of a sector

Returning to HE, for a sector still getting to grips with a newly regulated market and which had embarked on something of a recent arms race (certainly in capital expenditure terms) in order to attract students, this review threatened significant structural reform.

In this context, many will be relatively relaxed about the review as it stands.

What Dr Augur did do was attempt to understand better the institutional behaviours in HE and how to influence them, which as those of us in the NHS will understand, is a key part of the “centre” exercising more control over a sector.

We will see how much control the government wants to take back when they respond to the review later in the year.

As with my recommendations to universities in January regarding the long-term plan, the simplest way to understand the challenges and opportunities is to pick up the phone to your local colleagues. Now is the time to strengthen the relationships at the board level.

This independent report was rushed out before the prime minister exits the stage. Even though Theresa May won’t be the one leading the government’s response to the 50-something recommendations, this review certainly reflects her prevailing thoughts on a sector she never fully trusted in the same way as her predecessors.

It is worth noting that, aside from Brexit, the focus on the NHS and universities is pretty much the sum total of the current government’s administration.

Attention will now turn to the government’s Comprehensive Spending Review in the autumn, whose negotiations will likely decide which of Dr Augur’s recommendations will get the green light.

While the NHS expects the then chancellor to announce that “nothing has changed” and that the promised 3.4 per cent uplift is factored into our plans, our colleagues in the higher education sector will be hoping a different leader is one that still believes in experts.

Michael WoodMichael Wood is head of Health Economic Partnerships at the NHS Confederation.