A project set out to discover why clinicians often find service redesign problematic, and what can be done about it. By John Storey and Richard Holti

The idea that clinical leadership is crucial for the future viability of the NHS has been stated many times. Funding pressures running alongside rising demand dictate a need for cost effectiveness and improved service quality. Significant improvements will require new ways of doing things.

It is argued that clinicians, rising to the challenge of leadership, provide the solution. They can seemingly offer specialist knowledge, credibility and reputational power.

Despite such expectations, the reality of clinical leadership attempts to redesign services across the extant boundaries of the NHS have not so far been fully studied or demonstrated.

The challenges of leadership within hospitals were previously discussed in HSJ by Chris Gordon.

As important as that topic may be, significant service redesign usually requires the even bigger challenge of leading across organisational boundaries.

We set out to find what clinical leadership − as a process − looks like in practice. In particular, we wanted to know how clinicians have been involved in significant examples of service redesign.

We consulted widely within the NHS and we were advised to focus on two relatively understudied, but significant, areas: sexual health services and dementia services.

Both had been subject to relative neglect and they carried the potential for very substantial improvement of a transformational kind. To secure such improvements would require cross-boundary collaboration.

This project was funded by the National Institute for Health Research’s Health Services and Delivery Research Programme. We interviewed 74 informants across the four cases, including hospital consultants, junior doctors, nurses, other clinicians, managers and commissioners.

Feedback events were held with informants where managers and clinicians were able to respond to our findings and to offer insights on how they might work beyond the case sites.

In both sexual health and dementia services the general thrust of the redesign was to integrate services. For example, GUM and contraception services were modernised by streamlining services into a “one-stop shop” where multiple needs could be met in a single consultation with a clinician who could deal with diverse needs.

Service users were consulted and, as a result, clinic opening times were extended and facilities greatly improved.

In dementia care, a similar shift was achieved by integrating previously diverse specialist clinics into community-based “memory clinics” so GPs had a clearer idea of where to send patients in need of diagnosis.

Some senior clinicians, hospital consultants in the main, complained that it was difficult for them to exercise leadership in service redesign because they were excluded from the routines of decision making undertaken by the managerial hierarchies of their trusts.

Some reported being discouraged from straying beyond their normal clinic sphere and a few said they were not even consulted about changes which affected their service areas or which were adjacent to their areas.

A further set of barriers to the smooth exercise of clinical leadership was the degree of complexity and fragmentation of the complete system of care, which had to be comprehended and surmounted.

In dementia services, one of the characteristics of current practices is that diagnosis and care are scattered across multiple institutions, agencies and professions. No one “owns” the condition. Before redesign, there was a divide between psychiatric services and geriatric services. GPs might send a patient to either service.

In sexual health, there were similar challenges in understanding and bridging the largely separate worlds of GUM and reproductive health services. The task facing any would-be clinical leader or group of leaders is therefore heightened by the need to engage with cross-boundary issues − including agencies and bodies external to the health service such as local authorities and independent sector organisations.

A complicating factor for both settings was that other kinds of organisational changes were relatively commonplace. Separate trusts frequently rationalised services, closed and opened units or moved staff from one unit to another but without any notable improvement in service for users. This meant distinguishing between the “noise” of merely moving the furniture, from the stirrings of more significant far-reaching changes, could be difficult.

Service redesign was in each case sanctioned and triggered by national initiatives and policy papers. Mobilisation of local effort was much easier when it was seen to represent fulfilment of national level strategy. Local sponsorship, including funding, from commissioners and from acute trust top management, was much easier when the proposed changes to services were seen to be in accord with policy. 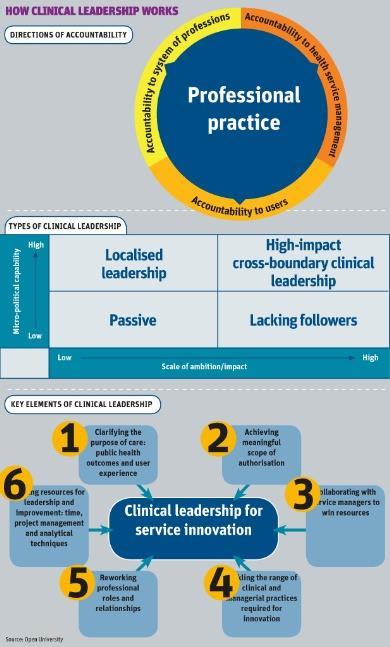 The national dementia and national sexual health strategies were crucial in shaping local cross-boundary service redesigns. Rather than restricting the exercise of clinical leadership at local level, they provided material local actors could work with.

The implication is that exhortations for more local clinical leadership need to be balanced by continuation of the clinical effort at national level in developing strategies for particular clinical areas.

Local clinical leadership stems in part from the intrinsic interest of many clinicians − doctors, nurses and allied health professionals − in understanding the wider system of care experienced by their patients.

The motivation to improve interfaces and bring together the forms of care people need often finds expression in informal initiatives to link with other parts of the health service and with social care. This is an important resource for more formal and structured service redesign projects. We found that it is often frustrated by the compartmentalised nature of NHS organisations but continues to thrive nonetheless.

Network organisations linking clinicians and managers across a locality or region have a vital role in fostering this kind of clinical vision and help develop a sense of belonging and commitment. There is a case for extending their scope, bringing in social care and third sector organisations.

Cross-boundary innovation required clinicians to develop a more extensive network. It also required being open to reshaping clinical and non-clinical practices and different components of the service, such as clinic organisation, booking systems, IT systems and tariffs.

Service design is inherently difficult − it involves challenging established habits distributed across a wide range of occupational areas, as well as across organisational boundaries.

Engineering these kinds of service changes required tactful persuasion and negotiation across multiple boundaries. Hospital consultants needed to negotiate with each other as they sought to “defend” their clinics and their staff while also seeking ways to design new service provision more suited to patient needs. They also needed to enter into negotiations with commissioners and their trust management teams.

Each of these relationships required the senior clinicians to accept responsibility for leadership. We found the more successful clinical leaders were able to be open to constructive redesigns while also bringing along their colleagues. Clinicians who were too entrenched found they were outmanoeuvred by commissioners and other stakeholders; conversely, those who were too gung ho risked losing the trust and support of their professional colleagues.

‘Local clinical leadership is not an alternative to top-down national strategies; they can feed off one another’

Informal, lateral leadership could mobilise and bring along clinical colleagues, and conversely formal project planning on its own could be relatively ineffective. The most effective service redesigns were achieved when these processes worked in tandem.

Challenges emanating from the national level which have been well forged with high-quality clinical input appear to provide a vital top-down mechanism for shaking up established thinking at local and regional level, providing clinicians who have been thinking about how to improve the structure of the services with an opportunity to make their case and take it forward.

Local clinical leadership is not an alternative to top-down national strategies; rather the two can productively feed off one another.