The go-to leader for trusts in a crisis

Strong leadership skills have set Dr Manjit Obhrai apart – from his early career as a consultant to his more recent post as medical director at Mid Staffordshire Foundation Trust – rather than his Kenyan Indian origin, as he tells Varya Shaw 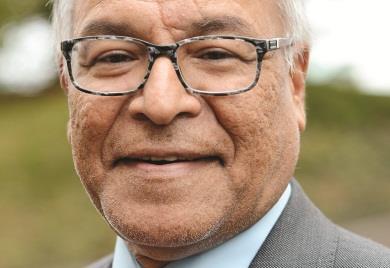 Dr Manjit Obhrai is known as a go-to leader for NHS trusts in crisis. He was the medical director who helped turn Mid Staffordshire Foundation Trust around after the damning Healthcare Commission report in 2009. He is now doing the same at Queen Elizabeth King’s Lynn Foundation Trust as its chief executive.

There are many strands to his professional identity – clinician, manager, educator, coach, leader, and troubleshooter. Probably the element that is least important to him is his Kenyan Indian origin.

He arrived in the UK from Kenya in the mid-1960s as a teenager. “I’ve never seen myself as any different from anyone else. I belong to the healthcare group,” says Dr Obhrai.

He became a consultant obstetrician and gynaecologist at University Hospital of North Staffordshire aged 36 and remained there for 19 years, becoming director of postgraduate education and then associate medical director.

He says: “When I was a gynae registrar I said to the senior consultant that I wanted to be a consultant. He said ‘look around you – you need to consider you might not make it’. All the consultants were white. I honestly think there was no element of racism; he was just concerned about my welfare. I said I will take my chances and I got appointed to consultant at 36 which is pretty decent.”

‘There was no element of racism; he was just concerned about my welfare. I said I will take my chances’

His values were solidified after an incident when a woman under the care of his team lost her baby. He wrote a report setting out where he and the service had fallen short, and gave the parents a copy. “The midwife said ‘the patient will sue you’,” he remembers, replying “that’s fine but we have to be honest with them”.

What actually happened was the parents moved to Nottingham, but travelled back to make sure Dr Obhrai delivered their next three babies.

Months before the first damning report into care failings at Mid Staffordshire was published, he got a call asking if he would apply for the job of medical director at the trust. He started a month before the report’s publication. It was an opportunity to make a difference on a much bigger scale, he explains.

His first days at the trust were “pretty horrendous”. “I walked the floor listening to harrowing stories from members of staff who were in tears. They had raised concerns which had not been acted on, especially around nursing shortages. It was about supporting them through a difficult process but also getting them to acknowledge the issues were real. There were pockets of denial in the organisation, some held the view ‘we were unlucky’.”

He adds: “The first job is to listen; the second job is to do something about it. One thing you don’t have on your side is time – you have to be fairly decisive.”

But to do all this you need support. This relies on a strong relationship with your chief executive and chair, which he was fortunate to have at Mid Staffordshire. “We made a solid team and made some difficult decisions to get the changes we wanted.”

Queen Elizabeth Hospital King’s Lynn FT was placed in special measures in October 2013 after two reports from the Care Quality Commission, eight improvement notices and four formal warning notices. Dr Obhrai was brought in as interim chief executive last year. He places great emphasis on openness at the trust. Every document is available to all unless it contains commercially or personally sensitive information, so “there aren’t different stories, there is only one version of the truth and that keeps everything clear”.

He places great emphasis on openness at King’s Lynn. Every document is available to everyone unless it contains commercially or personally sensitive information. “That means there aren’t different stories, there is only one version of the truth and that keeps everything clear.”

Openness is tangible in a cultural change at King’s Lynn – the executive corridor used to have all its doors shut and be known as “the God corridor”. No one calls it that anymore and the doors are open unless there is a good reason for closing them, like a meeting.

Accountability is also key: “As organisations we are too soft in the way we manage things – then people are held to account for things that are not their responsibility.

It is important to be clear at all levels what the organisation expects from you, what support it is providing and how it will hold you accountable, otherwise it becomes difficult.”

Putting the patient first solves a lot of problems. Take decision making at Mid Staffordshire, for example. “A lot of it is done at personal risk and you question is it the right thing? That’s why you have to put the patient at the heart because that is the sole thing that matters. If you focus on the patient and what is right for them everything else takes care of itself.”

However, you do not bring about such a culture by being a problem solver trotting out orders. You need to watch staff “from the balcony” and work out ways to make them want to behave differently.

So what should black and minority ethnic staff do if they want to become leaders? Put in the work and acquire the skills that will make you better than the next person, says Dr Obhrai. “The BME dimension is not something I have even thought about during my career. I have got here by merit and working hard. At medical school I spent extra discretionary days on the wards and stuck to my values and consultants recognised that, so when jobs came up they asked me to apply. Show your skills, work hard, demonstrate strong values and the rest takes care of itself.”

But he also says BME staff should be given opportunities. For example, basing promotions on skills, not seniority, would give them a hand up.

He adds: “I’m not saying let’s get a bunch of BME leaders to bridge the gap. I think they will bridge it themselves.”