The many transformations of Jeremy Hunt

About to become UK’s longest serving health secretary, Jeremy Hunt’s ability to reinvent himself every 18 months might be the key to his success but at the cost of leaving past priorities in the lurch, notes Thomas Cawston 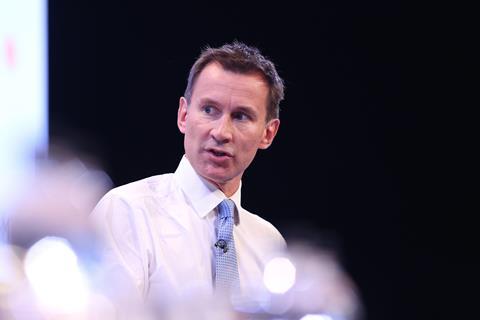 Jeremy Hunt is on the cusp of history. In nearly 100 days he will be the UK’s longest serving health secretary. Having returned to Richmond House for the fifth time after the January reshuffle he is almost certain to be in post to lead the NHS’s 70th anniversary celebrations.

Following weeks of briefings that he was on the move, perhaps even becoming de facto deputy prime minister, many were surprised to see Mr Hunt return to Health. His longevity has no doubt been aided by the fact that there is no one else in the Cabinet who wants to take on the health brief. But part of it might also rest on his ability to reinvent himself every 18 months.

As surprising as his reappointment was Mr Hunt’s newly discovered zeal for social care reform. While social care has always been part of his Department, Hunt has been quite content to leave it to his junior ministers.

During the coalition years, he let Norman Lamb take a lead on social care integration and in 2015 he didn’t protest when the Dilnot reforms were first pushed to the long grass and then into the Cabinet office. But since the reshuffle, the newly appointed secretary of state of health and social care has put it at the heart of his agenda.

His longevity has no doubt been aided by the fact that there is no one else in the Cabinet who wants to take on the health brief. But part of it might also rest on his ability to reinvent himself every 18 months

Social care reform, both funding and meaningful integration with the NHS, is long overdue and Mr Hunt’s determination to find a solution should be welcomed. If social care reform was simple, it would have been implemented by one of his predecessors. Integrating free at the point of care NHS and a means-tested social care system will involve some very tough choices for any government.

But since 2012, Hunt has been able to regularly find a new passion and a new priority to reinvigorate his tenure as health secretary. Roll back 18 months to when Theresa May kept him on after the referendum and he reinvented himself as an ardent champion and reformer of mental health.

Following the 2015 general election, he spent 18 months focused on making the NHS the world’s leading “learning organisation” and a better adopter of digital innovation.

In the wake of the Francis Inquiry, he became the health secretary who was going to drive quality improvement and patient safety through the power of regulation and inspection, taking his inspiration from the use of Ofsted for schools. And even after the EU referendum he had a passing interest in life sciences.

Looking for a purpose

Mr Hunt’s constant search for a purpose (and maybe even a legacy) might in part be symptomatic of the fact that the Health and Social Care Act hollowed out his job description. The creation of NHS England left the Department of Health and Social Care with little to do apart from observe and coordinate the various arms length bodies.

And now with an expanded ministerial team there is going to be even less work to go around. Should a major new review of NHS funding (perhaps a Wanless 2.0) get underway the DHSC may yet get a new lease of life. Certainly, achieving the previously unachievable and integrating health and care will keep the DHSC and its expanded ministerial team busy.

But while his ability to reinvent himself has put him on course to become the longest serving health secretary ever, it may have also undone any of the benefits that stability is meant to bring. Avoiding chop and change at the top should have meant the health system has had a single direction of travel to follow.

But each reshuffle has brought back a new health secretary with a new priority for the DHSC to get on with, it just happens to have been the same person.

Reinventing himself every 18 months has also meant that Mr Hunt has not been able to really see through any of his past priorities. It is possible that more could have been delivered through the transparency or innovation agenda if this had stayed as his focus.

After a brief sojourn in the limelight, it feels that parity of esteem for mental health is about to slip back down the to do list. If the DHSC is to make a real difference to social care or funding, ministers will need to stay focussed.