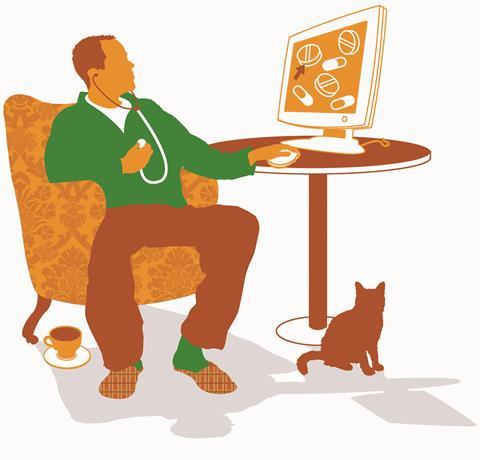 It’s estimated that between 15 and 25 per cent of people who present at A&E just shouldn’t be there, but go because they simply don’t know where to turn.

Lack of awareness of local services, including practical things like when they are open, is contributing to the well documented problems facing our emergency departments, with a knock-on impact throughout healthcare systems.

‘It’s a great example where the CSU, working with local clinicians, is really adding value for patients, and for the health service’

Step in Health Help Now. An app and website, specifically designed for a local health economy in Kent, it helps people find the right services to meet their needs, particularly when they aren’t sure what to do or who to contact.

“I attend local urgent care boards and the problems facing A&E would come up time and time again,” she says. “There had been various attempts to provide information to people on where they should go when they were looking for help, but they hadn’t worked. For example, when a leaflet was produced, it was found to be too complicated.

“So we decided to develop a digital solution – something that would be easy to use but which would have a lot of information.”

Despite being a self-confessed “non-techie”, Ms Burns helped to drive the creation of the app and website, which launched in December 2013.

In a sense, she says, the solution unites bits of the old NHS Direct app, which many found too complex, and local Choose Well apps, which contain information about local health services.

What makes Health Help Now stand out is that people can choose from a list of common symptoms and will then be signposted to appropriate local services. Advice is tailored to different age groups (ie baby, child, young adult, adult and older adult) and it gives detailed information on the nearest services across Kent and Medway, including whether they are open or closed, directions and a map.

It was publicised initially in north Kent and in its first six months, the local Darent Valley Hospital noted a significant drop in numbers of people attending A&E who did not go on to have investigations or significant treatment.

The website can be accessed from smartphones, tablets, desktop computers and laptops and in its first 14 months, had more than 42,000 hits from more than 28,000 users. Each session involved looking at an average of five pages and lasted two and a half minutes.

Although the bulk of users fell in the age category of 25-44, some 12 per cent of users were aged 65 and over.

“Feedback has been really positive and we’ve had interest from CCGs in other areas,” she says. “It’s a great example where the CSU, working with local clinicians, is really adding value for patients, and for the health service.”

Redesigning mental health services for children and young people in London’s East End was always going to be complex, not least because of historical fragmentation.

Tower Hamlets CCG realised that a new approach was needed, and approached North and East London (NEL) CSU for support.

“It was a really exciting project because it involved values-based and outcomes-based commissioning,” explains Laura Churchill, associate director of delivery improvement with the CSU.

“We hadn’t done it before, but nobody else had done it either, so we were learning alongside our client, which was a great and really positive experience.”

“We worked with the charity Young Minds which helped us find out what was important to children, young people and their families,” she says. “I feel that really added value to the project.”

Over three months, the project team held six listening events with more than 50 children, young people and their parents. It also held several workshops with stakeholders, to co-produce draft outcomes. This will form the basis of a new contract, delivering a more patient-centred service based on what children and young people have said is important to them.

Richard Fradgley, director of mental health and joint commissioning with Tower Hamlets CCG, is very positive about involvement with the CSU.

“We chose to work with NEL CSU’s delivery improvement and transformational change (DITC) team for the delivery of this project because they know us and our organisation really well, and are familiar with our current contractual arrangements,” he says.

“They have provided a structured approach to the development of outcomes relating to this important service that builds on well-known theories and methodologies.

“Also, they have learned alongside us how to innovatively build outcomes into contractual agreements with our providers. The DITC have supported us in engaging with a really broad range of stakeholders, including patients and their families, and have provided an independent and impartial view in facilitating these discussions.”

The CSU is also supporting development of a new values-based commissioning framework. This will form the basis of future pathways for older people with frailty and people living with psychosis or diabetes.

Having a basic framework to build on will save commissioners time and money, but the real benefit of outcomes-based commissioning is the ability to commission services that patients really need and that will help them lead healthier lives.

Tony Hoolaghan, NEL CSU director of DITC, comments: “Our services are bespoke for each organisation and their specific needs, but because we have developed a proven methodology for outcome-based commissioning that encourages innovation, our customers benefit from significant savings in budget and time.”

The size of the CSU means that clients can benefit from learning from elsewhere across the region, says Ms Churchill. “Often we are part of the glue that binds a project together,” she says. “CCGs are small, so not only can we offer capacity and expertise in things like contracting, but working with several CCGs on different projects means we can share knowledge and understanding of problems and good practice.”

Rehabilitation services in the South West

Commissioners in the south west of England drew on expertise from the local CSU to improve rehabilitation services across three CCG and local authority areas.

The aim was to review current services in Bristol, North Somerset and South Gloucestershire and agree new models of care to make more effective use of therapy time and achieve a more joined-up approach to services.

Bringing in extra capacity and expertise at different stages of the project was crucial, as was providing support to ensure that everyone was signed up to a common goal.

‘With access to the CSU, [customers] can bring in different people at different stages, which is a really flexible way to building capacity’

And that’s where South West CSU came in. According to project manager Elizabeth Williams, the CSU was able to add value in a number of ways, not least in terms of flexibility.

“What we have within the CSU is specialist skills, for example in project management,” she says. “So we can provide that capacity. With a dedicated project manager, you have someone who has the time, and the energy, to work across stakeholders.

“But we also have contracting expertise, which means that when projects reach the stage of having to draw up contracts we can provide that capacity too.

“With access to the CSU, [customers] can bring in different people at different stages, which is a really flexible way to building capacity.”

In addition, she says, as an organisation which is not aligned to any one of the commissioners, providers or other stakeholders, the CSU team has the ability to act as an honest broker.

“In this project we weren’t looking for a one size fits all solution, because we realised that different areas would have different needs,” she says. “But we did work very hard to align the services as closely as possible. There was a very strong feeling, particularly from providers, that it was a big help that they only had to go to one set of meetings, and we tried to come up with systems and models that would work across all three CCG areas.”

Contracting expertise was crucial, she adds. “It was important that more money was invested in services in the community, but this had to be done without destabilising secondary care,” she says.

Key to the whole process was getting good buy-in, right at the start, and keeping all stakeholders, including patients and the public, informed at all stages.